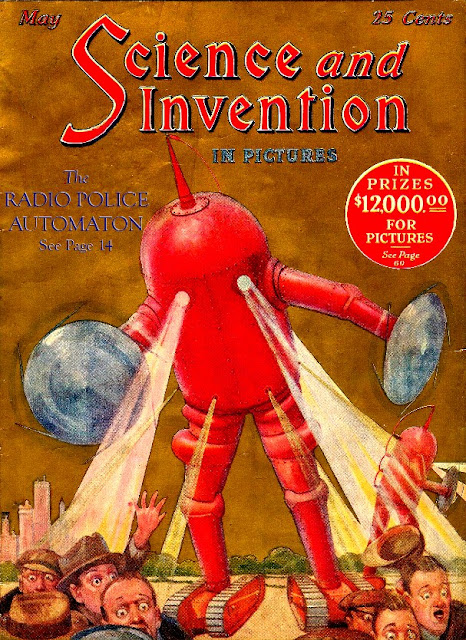 Such a machine would seem to be exceedingly valuable to disperse mobs, or for war purposes and even for industrial purposes. In the upper illustration is shown the police car which controls all the movements of a regiment of such automata. For fighting mobs use is made of tear gas which is stored in a tank under, pressure and which alone will quickly disperse a mob if necessary.. The arms are provided with rotating discs which carry lead balls on flexible leads. These act as police clubs in action. 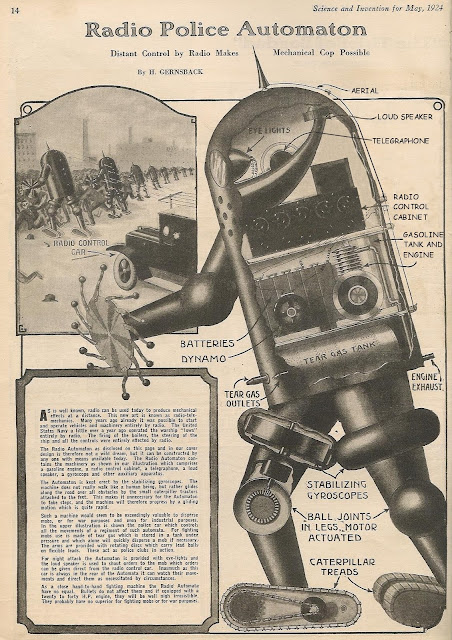 For night attack the Automaton is provided with eye-lights and the loud speaker is used to shout orders to the mob which orders can be given direct from the radio control car. Inasmuch as this car is always in the rear of the Automata it can watch their movements and direct them as necessitated by circumstances.

As a close hand-to-hand fighting machine the Radio-Automata have no equal. Bullets do not affect them and if equipped with a twenty to forty H.P. engine, they will be well nigh irresistible. They probably have no superior for fighting mobs or for war purposes.


"There is, in fact, no Idea so groundless and absurd as that which supposes that an increased facility of production can under any circumstances be injurious to the labourers."

Posted by Sandwichman at 3:48 PM