In President Obama's victory speech last night, he touched on a theme that he has stressed on two previous, conspicuous occasions:


"I am hopeful tonight because I've seen the spirit at work in America. I've seen it in the family business whose owners would rather cut their own pay than lay off their neighbors, and in the workers who would rather cut back their hours than see a friend lose a job."

That "spirit" Obama defined in the preceding paragraph as. "The belief that our destiny is shared; that this country only works when we accept certain obligations to one another and to future generations." Obama made almost exactly the same reference to workers cutting back they hours in his Inaugural Address in 2009:


"For as much as government can do and must do, it is ultimately the faith and determination of the American people upon which this nation relies. It is the kindness to take in a stranger when the levees break, the selflessness of workers who would rather cut their hours than see a friend lose their job, which sees us through our darkest hours."

But that's not all. In his 2008 acceptance speech at the Democratic Convention in Boston, Obama said:


"I've seen it in the workers who would rather cut their hours back a day than see their friends lose their jobs..."

The context of that first utterance is a bit more intriguing than the generic allusions to selflessness, faith and determination and shared destiny. It is a paean to the Rev. Martin Luther King Jr.'s "I Have A Dream" speech at at the 1963 March on Washington for Jobs and Freedom. The key passage begins with the declaration that "the change we need doesn't come from Washington. Change comes to Washington" and ends with the words of Rev. King, "'We cannot walk alone,' the preacher cried. 'And as we walk, we must make the pledge that we shall always march ahead. We cannot turn back.'":


You have shown what history teaches us - that at defining moments like this one, the change we need doesn't come from Washington. Change comes to Washington. Change happens because the American people demand it - because they rise up and insist on new ideas and new leadership, a new politics for a new time.

America, this is one of those moments.

I believe that as hard as it will be, the change we need is coming. Because I've seen it. Because I've lived it. I've seen it in Illinois, when we provided health care to more children and moved more families from welfare to work. I've seen it in Washington, when we worked across party lines to open up government and hold lobbyists more accountable, to give better care for our veterans and keep nuclear weapons out of terrorist hands.

And I've seen it in this campaign. In the young people who voted for the first time, and in those who got involved again after a very long time. In the Republicans who never thought they'd pick up a Democratic ballot, but did. I've seen it in the workers who would rather cut their hours back a day than see their friends lose their jobs, in the soldiers who re-enlist after losing a limb, in the good neighbors who take a stranger in when a hurricane strikes and the floodwaters rise.

Instead, it is that American spirit - that American promise - that pushes us forward even when the path is uncertain; that binds us together in spite of our differences; that makes us fix our eye not on what is seen, but what is unseen, that better place around the bend.

That promise is our greatest inheritance. It's a promise I make to my daughters when I tuck them in at night, and a promise that you make to yours - a promise that has led immigrants to cross oceans and pioneers to travel west; a promise that led workers to picket lines, and women to reach for the ballot.

And it is that promise that forty five years ago today, brought Americans from every corner of this land to stand together on a Mall in Washington, before Lincoln's Memorial, and hear a young preacher from Georgia speak of his dream.

But what the people heard instead - people of every creed and color, from every walk of life - is that in America, our destiny is inextricably linked. That together, our dreams can be one.

"We cannot walk alone," the preacher cried. "And as we walk, we must make the pledge that we shall always march ahead. We cannot turn back."

Those words, in Dr. King's speech, were followed by others:

Go back to Mississippi. Go back to Alabama; go back to South Carolina; go back to Georgia; go back to Louisiana; go back to the slums and ghettoes of our northern cities knowing that somehow this situation can and will be changed. Let us not wallow in the valley of despair.

I say to you today, my friends, even though we face the difficulties of today and tomorrow, I still have a dream. It is a dream deeply rooted in the American dream. I have a dream that one day this Nation will rise up and live out the true meaning of its creed--"we hold these truths to be self-evident that all men are created equal."

I have a dream that my four little children will one day live in a Nation where they will not be judged by the color of their skin, but by the conduct of their character.

I have a dream today.

I have a dream that one day down in Alabama, with its vicious racists, with its Governor, having his lips dripping the words of interposition and nullification -- one day right there in Alabama, little black boys and black girls will be able to join hands with little white boys and little white girls as brothers and sisters.

I have a dream today.

This will be the day when all of God's children will be able to sing with new meaning "My country 'tis of thee, sweet land of liberty, of thee I sing. Land where my fathers died, land of the Pilgrim's pride, from every mountainside let freedom ring."

Just as Dr. King's "I Have A Dream" speech puts President Obama's remarks about "workers who would rather cut their hours back a day than see their friends lose their jobs" into a much broader context there is also a little-known context for the most famous part of that speech -- the part which gave it the name it now bears -- which is described in the account presented by the "Civil Writes Movement Veterans History and Timeline":


Today, Dr. King's address is famous as the I Have a Dream speech. But the dream section, which is forever repeated in TV sound-bites and classroom recordings, is not part of his original draft. When King nears the end of his seven minutes of prepared text — the metaphor of the bounced check and the echo of Amos that “... we will not be satisfied until justice rolls down like waters, and righteousness like a mighty stream” — he senses — as do others on the platform — that something more has to be said. That the march itself requires some summing up, some articulation of the vision that moves the Movement, some expression of the aspirations, pride, determination, and courage of not just these marchers, but the Freedom Movement as a whole. 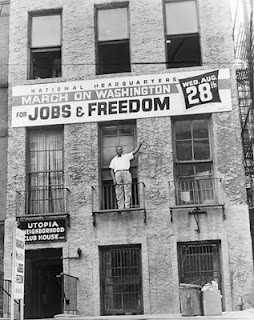 Sitting behind him, Mahalia Jackson leans forward, “Tell them about the dream, Martin.” She had heard him speak the dream at recent rallies. And with that, he steps over the seven-minute limit and off his prepared text to soar, speaking from the soul of the struggle to the heart of oppressed people everywhere, “Go back to Mississippi, go back to Alabama, ... go back to the slums and ghettos of our northern cities, ... Let us not wallow in the valley of despair ... And so even though we face the difficulties of today and tomorrow, I still have a dream. I have a dream that one day this nation will rise up and live out the true meaning of its creed: We hold these truths to be self-evident that all men are created equal ... I have a dream that my four little children will one day live in a nation where they will not be judged by the color of their skin but by the content of their character. I have a dream today! ...“ As he rolls on with his majestic cadences towards his ringing conclusion, “Free at last, free at last. Thank God Almighty, free at last,” Mahalia and others on the platform can be heard over the loudspeakers backing him up with the traditional affirmation of the Black church, “My Lord! My Lord!”"

The account of the March on Washington concludes on a sober note:


But while the march does affect Congress in regards to basic civil rights, it has little affect on the economic issues that form a key portion of the 10 demands…. Unemployment remains high — doubly so for non-whites — and the call for dignified jobs at decent wages falls on deaf ears, as do demands to increase the minimum wage to a living wage.

Looking back on the march later, Evelyn Cunningham, New York Editor for the Pittsburgh Courier, recalls:

"I must've cried for an hour and a half at one point during the march. Part of it was sheer happiness, part of it was pride, and part of it was my family. I'm steeped in my respect for my people. After the march, I thought, 'Oh my God, we're almost there' — God, was I wrong."