Limitation of the Vend

In their Industrial Democracy, Sidney and Beatrice Webb raised an interesting point I'd like to follow up on. 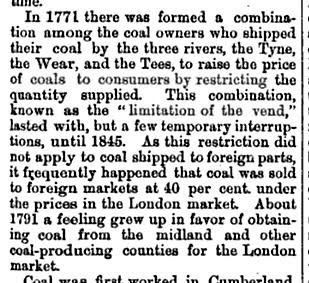 They observed that, "Restriction of output is, in fact, an employer's device, not a workman's..." and went on to cite the "Coalowners' 'Limitation of the Vend'". The Webb's were discussing frequent complaints that trade union policies restricted output. They argued that although some unions did indeed advocate the restriction of output, they had little power to enforce such demands.

Restriction of output is the essence of economists' lumpoflabor fallacy claims. Ironically, the Webbs, in disputing the salience of such claims, are one of the few sources that presented evidence that some unions, at some times, did exhibit lumpoflaborite beliefs.

Now, remember coal was a BIG DEAL in the days of the Industrial Revolution, so restricting its output to boost its price would have been a BIG DEAL in the economic history of Great Britain. Paul Sweezy studied it back in the day. So naturally I wondered how many 20th century economics textbooks even mentioned it. Not just any textbooks but those that made a big deal about lumpsoflabor. I've collected 580 sources from Google Books, over a hundred of them have every appearance of being textbooks (ie., 600-800 pages long with titles like "Principles of Economics"). The answer: 0.

Well, alright... "limitation of the vend" may be a bit narrow and obscure. How about "price fixing", then? Of the 580? Three mentions.

With all their ranting and raving about alleged beliefs of workers, most economics textbook authors managed to mantain a discrete silence about the documented activities of capitalists. This is significant because to the extent workers might have had the views claimed by economists, it is plausible that they acquired them not by invention out of thin air but by observing capitalism in practice.

Posted by Sandwichman at 2:44 PM

The Statute of Laborers of 1351 forbade servants from demanding more than customary wages or masters from offering more than custom provided. In modern terms it forbade collective bargaining and wage fixing alike. Although successive versions of this statute continued in existence through to the end of the 19th century there was to my knowledge many applications of it to labor and never a single application to capital, even though things like the Black Book were known to exist.

That little to none of this shows up in standard economics textbooks is largely in my view because orthodox economics largely developed before the introduction of universal electoral suffrage, which in England didn't come until 1918. In political-economic terms large portions of the working class didn't count because they were literally not counted.

And then there was the combination of British bankers to control the supply of currency. Th Currency Act of 1764. Laws preventing the issuance of a local currency in the American colony.

I understanc that some people got rather annoyed about that.

Wait, so you're saying that Principles books don't teach about monopolies, oligopolies, collusion or cartels?

If you only got 3 out of 580 then that suggests there's something wrong with your search rather than the textbooks. (For one thing, it's more likely to come up in Micro than Macro)

Maybe it's because there wasn't that much physical capital around to be bothered with. Certainly there were many many restrictions on financial capital.

No, YOU wait, sneaky. I didn't say principles texts didn't talk about monopolies etc. I said THOSE texts that talked about lumpoflabor didn't use the term price-fixing.

I made a specific, narrow factual observation that I think is remarkable in its own right. I didn't make a sweeping generalization that could easily be disproven.

I also didn't claim that my sample of 580 lumpoflabor sources was a representative sample of all economics principles texts. Nor are the majority of those 580 sources principles texts. Therefore, there was nothing "wrong" with my search. I was asking the question I wanted an answer to not your ex post facto revision of the question I "should" (in your opinion) have been asking.

Yeah but seriously, how many principles textbooks talk about "lumpoflabor"? And if they do, they usually mention it in passing. So your search probably picked up some textbooks that used the word "lump" (probably as in "lump sum") and the word "labor" somewhere in the near vicinity. And out of those, you really think only 3 failed to discuss "price fixing" by firms?

Even if you mean something somewhat else then I think you mean you're misrepresentin' things seriously.

Oh, btw, I got 5 bucks that goes to anybody who manages to publish a paper disproving the Stone-Weierstrass theorem in one of the top 30 Mathematical journals. I mean, those crazy Mathematicians. They just take that crap for granted. 2 extra bucks if you cite this comment of mine right here in your disapproval. Hell, 1 buck if you just write about something somewhere and cite this comment of mine right here. Ok. fitty cent.

As far as I know, sneaks, the last economics textbook to discuss the lump-of-labor fallacy was Paul Samuelson's. I am talking here about the introduction and evolution of textbook lore, not its current usage. As for current usage, the claim has shown up recently, as unquestioned truth, in some fairly high places, such as LSE, MIT, IMF, OCED and JEP.

But back to the introduction and evolution. I've compiled a list of approximately 160 titles. Not all of them are economics textbooks. Some are business or personnel management. A few of those 160 titles may not be textbooks -- but they have textbook-y sounding titles.

Not a lump-sum in a carload. I searched for phrases -- "lump of labor", "lump of work" "work-fund fallacy" etc. And the deal-maker is the short excerpt from the book that Google returns containing the search phrase. For example:

"The "lump of labor" idea, as it is called, is widely held, especially among workingmen. The notion is that there is exactly so much labor predetermined to ..." "This evil would at any time be serious, but, in an epoch when the " work fund fallacy " has won converts among artisans and has roused in them dislike and ..." "or if there are less machines, the pay of each man will be higher. This " lump-of-labor " doctrine of the workman is just as fallacious as the old ... " "the lump-of- labor doctrine, and the latter is undoubtedly a cherished belief of many workmen. But whatever the attitude of the trade union ..." "It is all a part of the lump-of-labour theory, and it is all in a confused and bewildered way benevolent and generous. It seeks salvation through the gospel ..." "familiar lump-of- labor argument of the trade unionist: There is just so much work to be done, and if some men do a little less there will be more for ..." "The "Lump of Labor" Theory, or the Theory of a Work-fund. Money and the Balance of Trade: An Exploded Theory. A Study of Human Wants." "The lump-of-labor theory is based upon the assumption that there is a given amount of work to be done; if one group of laborers does this work other groups are unemployed, and if machinery does the work labor goes idle."

Now, remember, I didn't claim that none of these textbooks contained a discussion of price-fixing. I merely observed that only 3 of them used the phrase "price fixing". You can draw your own conclusions about what the meaning of that is. Mine is that it raises questions about how many of those texts actually did discuss price fixing.