Saving ourselves in a new way 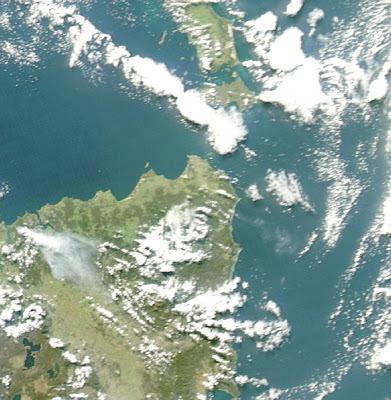 On the right see the satellite image of smoke from one of the many annual industrial forestry burns in Tasmania, Australia. This one is over North Eastern Tasmania where the pollution again caused people to evacuate their homes.

[We must] "stop seeking and celebrating dinky achievements" because "nothing that we are doing, nor even seriously contemplating, comes anywhere near such a massive transformation [as is necessary], yet every actor on the political stage ... downplays the terrible realities and trumpets small-scale solutions wrapped in upbeat rhetoric ... We are racing toward the end of the world and have no plan of escape, but it is considered impolite to acknowledge that fact in public."
----Ken Ward, the former deputy director of Greenpeace USA and an environmental strategist

The elephant in the room “is this: we only get one shot at this, and we don't have the luxury of a trial option that locks in a bad policy for decades…. At 1˚C the genie is out of the bottle, at 2˚C the bottle is broken.”
--- David Spratt, author of Climate Code Red.

"We are on our way to a destabilisation of the world climate that has advanced much further than most people or their governments realise", so "our survival would very much depend on how well we were able to draw down carbon dioxide to 280 parts per million", compared to the present level of close to 390ppm."
---Hans Joachim Schellnhuber, director of the Potsdam Institute and Europe's leading climate scientist

David Spratt informs the reader that Zero Carbon Britain released an alternative energy strategy in 2007 that found "in 20 years, the UK could produce 100 per cent of electricity without the use of fossil fuels or nuclear power, while also almost tripling electricity supply, and using it to power most heating and transport systems." [1] However, the report refers to carbon capture technology that is not yet proven. It also promotes the idea of a huge expansion of forestry and biomass crops over agricultural land. And here's another major cause for concern about this report. The science behind forests as carbon sinks is very dubious. See 'Pieces of Mind'.

[1] In the end, climate is not an economic question
By David Spratt - posted Tuesday, 8 July 2008
http://www.onlineopinion.com.au/view.asp?article=7602

Posted by Myrtle Blackwood at 8:04 PM

" .... the freeing up of large areas of land for forestry and biomass crops."

and
"...One approach to reducing greenhouse gas emissions is the capture and storage of carbon from large sources like power
stations, by ʻscrubbingʼ them from flue gases and storing the CO2 in geological formations or in the deep ocean. ... when
burning biomass with CCS the net result is carbon negative
Enhanced Carbon Sinks."

(from the Zero Carbon Britain report).

Where is the evidence for:

the viability of 'carbon capture' ?

covering the earth with (flammable) forests will store carbon??

The burnoff in the image occurred earlier this month (May 2009).

I received an email with a copy of this image from one of the latest victims. It said:

"Hi,
Copy of satellite image for the 12 May below. See smoke which went over Launceston and then blew east with the westerly winds and smoked me out on Tuesday night when it landed in Patersonia. Others reported respiratory problems on the day. It smelt like a bushfire and caused headaches despite the organic vopour mask I was recommended to wear for protection. It was very smoky from Patersonia to Ross so I stayed in Oatlands. Air quality has most likely exceeded limits at different times during the day due to mass pollution from planned burns affecting the NE of the state(at minimum)
There were 7 High Intensity burns on near Burnie all week( hard copies available) plus several more in the NE and I have heard there was a parks probably fuel reduction burn on in the north which is not listed on the planned or burns alight website for the 12th.

It is the EPA's responsibility to prosecute for significant pollution to Tasmanians over this incident and has not yet done so over last years incidents reported in the Patersonia Smoke Diary. The EPA has only partially assessed the smoke diary and graphs which provide evidence showing that significant pollution in Launceston was coming from planned burns outside the city last year. Pollution continues this year putting parts of the North East at hazardus (based on US 150m-2.6km visibility impairment scale provided by Dr Bicevskis, Health Department ) health risk.
This is the second year a trial burning programme is in place via forestry and the FPA [ie the usual huge burnoffs but this time combined with 'air monitory'] and it is failing again. Why are we relying on the meteoroligal predictions for smoke dispersal for one day when the planned burns are alight for a week (as in the case of the Burnie burns on the planned site this week) and long term smoke dispersal is not reliably predictable? The Burnie burns were alight to the 14 May.

Satellite images are available at:

So "where is the evidence" that water is wet?

The Mexican site is located a few miles away from a power generation station. By pumping carbon dioxide from the station into the algae bioreactors, the saltwater algae farm can boost production to 10,000 gallons of ethanol per acre per year, he said.

Algenol is privately funded with just under $70 million and is not looking to raise more money.

Woods said that there are a number of sites in the U.S. that it hopes to develop that have a lots of sunlight and access to seawater.

"There are tons of CO2 being emitted, and we can take it all. There are lots of opportunities for good locations in the U.S.," he said.

The output numbers are actually 40% of what is claimed but the CO2 segestration numbers are not (according to various scientific studies).

I think it a very wise move to convert the entire Sea of Cortes into one huge algae pond. But the environazis will be there protecting a salamander.

As to the creation of forests to capture CO2 that seems very natural to me. The only answer to the problem of forest destruction is birth control bills.

Algae in the oceans convert more CO2 to O2 and H2O than forests.

But homo sapiens prefer land environments and forest are nice.

Converting sugar cane and corn are nice but there are technologies to convert cellulose to CH base fules as well.

I do like forestation however the issue is pursuing alternatives to energy protected by the war machine.

What do you do when the princes no longer need Lockheed Martin?

Then what is the answer, ilsm?

"Not to be deluded by dreams,
To know that great civilisations have broken down into
violence, and their tyrants come, many times before.
When open violence appears, to avoid it with honour or choose
the least ugly faction;the evils are essential.
To keep one's own integrity, be merciful and uncorrupted
and not wish for evil; and not be duped
By dreams of universal justice or happiness. These dreams will
not be fulfilled.
To know this, and know that however ugly the
parts appear
the whole remains beautiful. A severed hand
Is an ugly thing, and man dissevered from the earth and stars
and his history..for contemplation or in
fact...
Often appears atrociously ugly. Integrity is
wholeness,
the great beauty is
Organic wholeness, the wholeness of life and
things, the divine
beauty of the universe. Love that, not man
Apart from that, or else you will share man's
pitiful
confusions, or drown in despair when his days darken.- Robinson Jeffers, "The Answer" from Selected Poetry (1938)