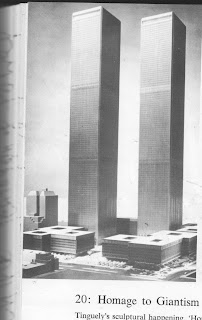 In 1970, Lewis Mumford wrote an interesting paragraph - under the image of New York's World Trade Centre, as above. In his book 'They Myth of the Machine - The Pentagon of Power' the following text appears:

"The Port of New York Authority's World Trade Center, 110 stories high, is a characteristic example of the purposeless giantism and technological exhibitionism that are now eviscerating the living tissue of every great city. The Port authority, a quasi-governmental corporation, was in origin a happy political invention, first installed in London; but unfortunately its social functions have been subordinated to pecuniary motivations: and its executives have conceived it their duty to funnel more motor traffic into the city, through new bridges and tunnels, than its streets and its parking spaces can handle - while contributing to the lapse of a more adequate system of public transportation that included railroad, subway, and ferry. This policy has resulted in mounting traffic congestion, economic waste, and human deterioration - though with a constant rise in land values and speculative profits. These baneful results were anticipated and graphically depicted by Clarence S Stein, then Chairman of the New York State Housing and Regional Planning Commission, in his article on 'Dinosaur Cities' in the 'Survey Graphic', May 1925. Stein there described the breakdown - already quite visible - resulting from housing congestion, water shortage, sewerage pollution, street clogging, traffic jams, and municipal bankruptcy. But Dinosaurs were handicapped by insufficient brains, and the World Trade Centre is only another Dinosaur."

I deeply suspect, as Lewis Mumford does, that disastrous designs and decisions at the highest levels of world society will perpetuate to (likely imminent and global) catastrophe.

"The suppression of personality is already so complete in an automated economy that the reputed heads of our great organizations are as incapable of changing its goals as the lowliest filing clerk. It is the system itself that, once set up, gives orders."

Posted by Myrtle Blackwood at 9:45 PM

Brenda,
I can well appreciate Mumford's dissatisfaction with the "Twin Towers" of lower Manhattan. As a boy growing up in Brooklyn I would weekly go to visit my maternal grand parents. They lived around 21st St and 1oth Ave, where what is now the Prospect Expwy. Their home was razed in favor of that road, a blight on the neighborhood. Before the change I could, because of the elevation of that point, look WNW and there was the Statue of Liberty in full view.
Nothing else stood out on the skyline. Pretty neat for an eight or nine year old. My reaction to the introduction of the two towers some years later is still clear in my mind. "Why would anyone want to put two cheese boxes on end and screw up the sight lines into NY harbor?" I never did like the intrusion. Architecture in NYC has never recovered its past glories, which were many and beautiful.

Interesting that after 9-11, the Randroids were celebrating the WTC as a symbol of the triumph of Reason, Capitalism, and Man [sic]. Quite telling, considering it was a state-capitalist abomination cooked up between David Rockefeller and the Port Authority, and involved an eminent domain deal.

And the very "need" it was built to meet resulted from the state-promoted centralization of global finance and trade. In an America of a hundred local industrial economies like Emilia-Romagna, and in a world without subsidies to long-distance trade or IP law as a structural support to global corporate boundaries, the WTC would be useful only for the function Wm. Morris gave the Houses of Parliament in News from Nowhere.

I believe there was an old Syrian neighborhood there before.

I wonder if "Catch-22" author Joseph Heller who also wrote about the Port Authority in a subsequent novel had expressed any thoughts on the twin towers.

Here in Boston's South End, we once had an area of Syrians, Greeks, Jews, Armenians, with their ethnic shops that were a joy to visit when I was a lad in the late '30s, early '40s tagging along with my mother as she shopped for goodies that were not available at the A & P or First Nat'l stores. (I understand that the Jewish pickle stores are still around in NYC with their products in barrels.) I recall with pleasure my mother's banter with the shop keepers about what she wanted to purchase and making sure it was of good quality. I recall one time a shop keeper had a surprise for her - a lamb's heart. My mother purchased it and back home on the gas burner she grilled it for us. That was the one and only time I had lamb's heart - and it was delicious. My mother was so happy as it brought back fond memories of the old country that she was forced to leave as a child with surviving members of her family. Boston's South End has changed dramatically since then.

"Why would anyone want to put two cheese boxes on end and screw up the sight lines into NY harbor?"

It seems rather incredible, Jack. Mumford says of motive behind this monstrosity: "social functions have been subordinated to pecuniary motivations: and its executives have conceived it their duty to funnel more motor traffic into the city, through new bridges and tunnels, than its streets and its parking spaces can handle - while contributing to the lapse of a more adequate system of public transportation that included railroad, subway, and ferry."

Capitalism at work again. There's no profit in public transportation. High rise near a major world port means the intensity of commerce rises with each floor built.

Shag from Brookline, I remember going shopping with my mother to the old fashioned grocery store. When the man at the counter ran around filling cardboard boxes with the items from mum's handwritten list. The fondest trip downtown was to my aunty's bakery shop where Aunt Enid would provide a selection of small delicious cakes. But that was a very long way away from the Twin Towers in New York City. :-)

It's not a matter of nostalgia for what was there before the Towers took over the lower end of Manhattan. Things change. It's what is chosen to take the place of what was that is more to the point. Two cheese boxes stood on end hardly improved the look of the city hall area. For that matter there's not a lot that's been built in Manhattan in the past forty years that has improved anything other than the wealth of the owners of the properties and not even always that. Take a look at the Chrysler Building and the Empire State for examples of what is at least interesting to the eye, and wither are little more than elongated boxes, but with a bit of flair added here and there.
The Guggenheim opened to mixed reviews, but at least it was different from the sorrounding others.

I don't think it had anything to do with state capitalism and the idea of function over form. The boxes were simply unimaginative inside and out. And apparently none too strong.

Jack, I was merely taking advantage of an opportunity to reminisce. I think I understand what you mean about those awful box structures.

Brenda: The Houses of Parliament were used as a storage facility for manure.

I was focusing my comment more on shag's sense of reverie for the quaint characters of lower Manhattan, though that by extrapolation only. By the way, I don't think that there's more than one pickle place left and that's actually in the lower east side, closer to Delancey St rather than the city hall area of the Towers.
There's the Pickle Guys on Essex and there is/was Gus's Pickles on Orchard St. Seems Gus's, well known for many years, ran into a "who owns the name issue" and the current owner lost the right to the name. So much for the reverie of nostalgia. And that shop is said to be moving to the Boro Park area of Brooklyn. Totally appropriate as Borough(nuveau spelling)Park may have more truly jewish Jews than any where else in the world. Now that's nostalgic. I grew up in Boro Park.

But I digress. New York City has always lived on its peculiar combination of diverse ethnicity flavored by distinctive and diverse structural character. Its financial nerve center played off of that and its concentrated population. So we had a city that had something for everyone. If the architecture didn't quite compare to old Europe its vibrancy well made up the difference. "It's 3:00 AM, I'm starving. Let's go here, there or where ever for a bite. No problem." And affordable. It couldn't be beat. It's not quite the same since the whole sale gentrification of the whole place.
Even Times Square is now only for squares. No flavor. No seedier side. No bums and vagrants. Not even a street walker to gawk at. Thank goodness you can still get a bite to eat at any time and its got the best supply of jazz clubs though its all getting a bit pricey.

The Towers added nothing to all of that. It is criminal that so many people died in the Centers' destruction. It was a cowardly and worthless effort, even to the perpetrators. But the Towers themselves are no loss.