On That Misleading Unemployment Rate Statistics (Once Again) 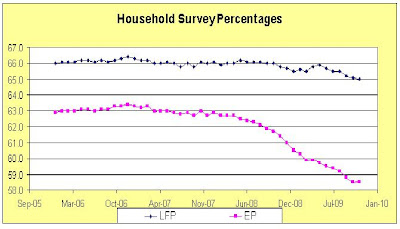 The employment survey indicated the number of people working fell but then the household survey showed a lower unemployment rate. While some say this is good news, the best I think we can say is that it does not suck as much as what we saw in terms of changes in prior months.

On a political note, however, this administration isn’t exactly crowing about how wonderful the labor market is (recall the previous administration often cheered whenever the reported unemployment rate showed even the slightest dip) as it is willing to admit we need to do a lot more to stimulate this economy and put people back to work.
Posted by ProGrowthLiberal at 3:04 PM

Is it not the case that whether or not employment rose or fell last month, the wave of layoffs has dramatically slowed and we may have hit bottom in this cycle with regard to the labor market? Hitting bottom is the necessary prelude to starting to go back up again (which may have in fact happened), even if there is a long way to go and it will take a long time to get things noticeably better.

If indeed there was a "massive spike" in early SS retirement, it'd be reasonable to attribute it to "lost hope" dropouts who are no longer seeking jobs.

That sounds more like rational calculation around an awful situation than "demographics."