Almost All of the Financial Crisis in One Picture

For a summary lecture in my class "Understanding the Financial Crisis", I've prepared a graphic of the big picture. There wasn't enough space for every item, and the arrows need a lot of explanation, but here it is: 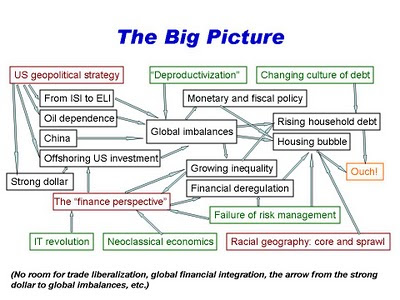 Note: Black indicates "economic" factors, green "cultural" and red (or plum) "political". These are loose distinctions, of course. Most of the boxes are self-explanatory, except for the following:

"Deproductivization" describes the erosion of productivist motives in US institutions and policies, including education, infrastructure, regional and industrial policy.

The "Finance Perspective" signifies both financialization as a conceptual framework and the ascendancy of financial interests in the political sphere.

There simply wasn't space for a box for trade liberalization, which is influenced by the IT revolution, US geopolitics and the finance perspective, and which encouraged the shift to ELI, while acquiring its distinctive characteristics in conjunction with (how do we show this?) deproductivization. It played a significant role, directly and indirectly, in the emergence of global imbalances.

Global financial integration was influenced by geopolitics and the finance perspective, took on its particular form as a result of the failure of risk management, facilitated domestic US financial excesses (and excesses in other deficit countries), and was a central conduit for the propagation of the crisis.

I need at least one more dimension to show all this.
Posted by Peter Dorman at 11:56 AM

ISI to ELI seems less like US geopolitical strategy and more like East Asian industrial strategy - when the US pressures China/80's Japan/etc. to appreciate their currency, the US is opposing ELI.

You'd have more room if you eliminated the space taken up by the title. You're allowing PowerPoint's desire to look like a slide to take up valuable space.

There, that seminar I took with Dr. Tufte finally pays off.