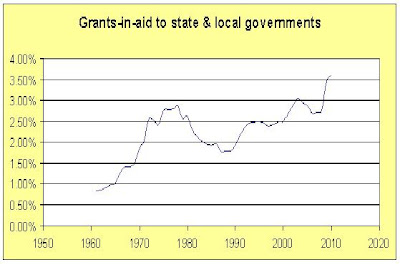 Mark Thoma brings up a couple of related themes. The first being:

Those balanced budget requirements force state and local governments to adopt pro-cyclical fiscal policies, which has been recently dubbed the 50 Little Herbert Hoovers problem (I believe Paul Krugman coined this term). This problem is generally well known by at least the school of economists who appreciate what Lord Keynes was saying in his General Theory and one remedy for this problem is countercyclical movements in Federal revenue sharing. But let’s have Mark continue:

If the federal government steps in and helps to close the state and local budget gaps, the negative consequences can be reduced, but budget pressures at the federal level make federal help unlikely. In the worst case, states could face large federal-to-state cost shifts or cutbacks in federal payments as a result of attempts to balance the federal budget, something that cannot be ruled out. That would lower growth even more. Thus, the extent to which Congress chooses to shift costs or reduce payments to the states as a remedy to federal budget problems could be an important factor in the recovery.

My limited contribution is simply the above graph showing the ratio of Federal revenue sharing to GDP over the past half century. Note in particular that this ratio climbed during the last recession and that it reached 3.5 percent during the current one. Given the severity of the recession, some of us would have hoped for even more Federal revenue sharing. But alas – there does seem to be a tendency for some D.C. politicians to adopt Herbert Hoover economics at the Federal level.
Posted by ProGrowthLiberal at 2:39 PM

The problem was known in the US during the Great Depression, when it was even more dramatic than now.

Of the federal grants-in-aid to the states from 1990 to 2000, the major state, now bankrupt, actually lost money. It was really a grant form then to other states. ProGrowthLiberal is looking at 2.5% of GDP transferred from the winner states to the loser states during that period. Generally the bankrupt states, CA,NJ,IL,NY, lose 15% of that, so they have lost collectively about $60 billion from this program. That number is close to the shortfall they now suffer.

I really hate like hell to break into a Keynesian, non Keynesian religious argument or an argument espousing the shift of gold doubloons from the blue states to the red during the Gingrich years. But I am going to offer the suggestion that we are not on a gold standard and that the amount of federal reserve money is not fixed or limited in any way other than the fear of the inflation monster. And as to the arguments about state budgets, the states should fund their governments on ad valorem land taxes and resource extraction fees.

I've been making some cartoons on monetary policy. How about some feedback on "Isaac Explains Monetary Econ".