I’m just back from a trip to the North Frisian Islands.  Tens of thousands flock there for vacations each summer, inundating the long, car-choked island of Sylt and the much nicer but still busy Amrum.  My strongest impression, however, was the lonely landscape of Hallig Hooge, the small island just NW of Pellworm.

Several thousand years ago most of the North Sea between England and Denmark (the German Bight) was above water.  Neolithic people roamed freely over the entire area, hunting game and later practicing agriculture.  As the sea level rose, solid ground turned to marsh and was then submerged altogether.  Eventually there was only the string of islands clutching the coast from the Netherlands to Denmark with the strange rock table, Helgoland, sitting almost by accident 40 miles from shore.

People continued to live on the coastal islands, but life was hard, especially since homes and fields were vulnerable to inundation by winter storms.  From time to time a particularly severe storm would turn island into sea in a single, deadly onslaught.

Around 800 AD or so, the Frisians settled this precarious region, preferring the struggle against mud and sea to subjugation by foreign rulers.  Their strategy on the most threatened islands was to build giant mounds by hand, on which they built their houses, hopefully above the storm tide.  This was the original settlement design in the Netherlands before the swamps were drained and the dikes erected, but in the North Frisian Islands the mounds – called warften – can still be seen and still play a crucial role in preserving outposts of settlement.

Hooge is one of these Hallig islands.  We tied our little boat to an old wooden bridge, where it was half-swallowed by mud at low water.  There were two other neighboring boats and several kayakers camped out at a nearby hillside: that was harbor life.  Other than a few horse-carts to ferry small groups of tourists from one hallig to another, not much was going on, which was fine.

Here you can see the overall landscape, flat with a warft in the distance. 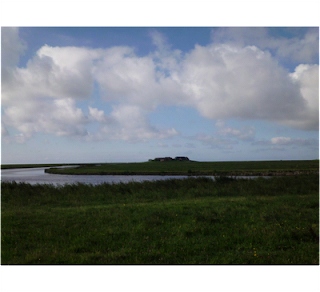 Get closer, and the profile of a warft takes more familiar form, a house on a hill – only the hill was the product of centuries of hard physical labor. 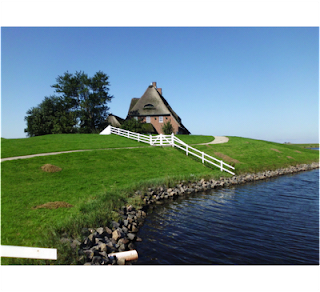 The German government subsidizes the hardy few who continue to live on these Hallig islands; they are seen as a force for stabilizing the precarious coastal environment.  A small trickle of visitors, like myself, come to see them each year to marvel at this obstinate, somewhat irrational lifestyle.  Modern Hallig residents, of course, are safer than their ancestors, and they have satellite dishes and motorboats to zip back and forth to the mainland.  Still, they are the heirs to a long tradition of hanging on, against great odds, to the fragments of a former land.
Continued sea level rise due to climate change will guarantee that this century is their last.
Posted by Peter Dorman at 8:19 AM

Thanks for a lovely post and the pix. Another loving evocation of the area may be found in Ersine Childers classic spy tale The Riddle of the Sands set in the pre WWI period. All about boats and the duffers who sail them for "pleasure". Quotes because of chacun ses gout.

Childers gives us a wonderful account of what it must have been like to sail in the Wattenmeer before all the buoys and pricken were in place, but the plot is dreadful. There are some modern German murder mysteries set in the region (of course), but I don't know anything about them.

What? You don't like the derring-do, boys-own-adventure school? Oh well. But I did recommend it for the evocation of place rather than its page turning qualities.
--ml