The Cost of Volcker’s Disinflation and 1978-Era Macroeconomics 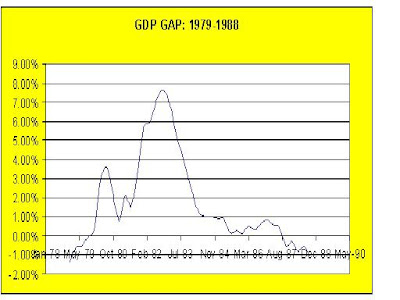 Paul Krugman has an interesting post on two counts. One count is his link to an intriguing discussion of macroeconomics by Robert J. Gordon. Gordon traces through the development of DSGE models and compares to them to how Keynesian models had evolved (1978-era macro) before the modern macroeconomics started to just ignore them. Gordon argues that 1978-era macroeconomics have a lot to say about how current situation and how we got here. The second count was the main reason for Paul’s post:

And one of the things they tend to bring up is the hoary old myth that the 80s success in taming inflation was somehow a terrible shock and surprise to Keynesians, who had no explanation. This is, as it happens, completely wrong: what actually happened in the 80s was, quite literally, a confirmation of the validity of textbook Keynesian economics. OK, first the facts: the 80s were marked first by a simultaneous surge in unemployment and plunge in inflation. Then unemployment came down but inflation stayed low(ish) … Inflation rate = -α(u – NAIRU) + Lagged inflation rate where u was the unemployment rate and the NAIRU was the non-accelerating-inflation rate of unemployment. And what did this approach predict about disinflation? It said that if policy makers were willing to impose a period of very high unemployment, they could bring inflation down — and that even if unemployment then fell back to the NAIRU, inflation would stay down.

Paul’s graph shows the unemployment rate over the 1979 to 1988, while our graph shows the GDP gap (using the CBO definition of potential GDP) over the same period. Notice we had a sizeable gap during the last two years of the Carter Administration followed by an enormous gap right after Reagan took office. The gap narrowed over the next few years but was still around 1 percent of GDP as Reagan’s second term started. Much of the movement in the GDP gap both up and down should be attributed to Volcker’s monetary policy. I agree with Paul’s assertion that it required a sustained period of often significant excess supply to achieve this disinflation. Some critics of this view, however, note how quickly inflation fell during the second bout of Volcker’s tight monetary policy (1982 recession). Gordon’s paper, however, also includes the following:

Instead this paper revives the supply‐side invented in the mid‐1970s that recognizes the co‐existence of flexible auction‐market prices for commodities like oil and sticky prices for the remaining non‐oil economy. Adverse supply shocks coming not just from oil prices but also, as in the early 1970s from auction‐market price shocks in food and exchange rates, boosted the expenditure share of commodities and forced nominal spending on non‐shocked products to contract.

Adverse supply shocks were partially for the run-up in inflation that the Volcker FED inherited. I would add that the U.S. economy had a series of favorable supply shocks, which were part of the reason why inflation fell so quickly. The oil price hikes during OPEC II were partially offset by oil price decreases while the dollar appreciation (due to the tug of war between Reagan’s fiscal stimulus and Volcker’s second bout of monetary contraction) lowered the dollar price of imports. This dollar appreciation had to later be reversed, which is why inflation stopped declining even as the GDP gap remained positive. Viewed over the entire 1979 to 1988 period, we did have to endure an awful lot of cumulative pain to get the inflation rate down to the lower levels enjoyed during the Great Moderation.
Posted by ProGrowthLiberal at 6:11 PM

William Greider wrote a book about this in 1987, Secrets of the Temple. He makes the case that both the original inflation and "Reagan recession" were caused by the Fed. In the last case, by Volker using tight money to fight Reagan's "Keynesian" deficit stimulus.

it's 700 pages, but easier to read than the contortions of theorists.