"How not to go about understanding peasant societies..." (or any society for that matter)

In his study of anthropology journal citations, "Anthropology Journals: What They Cite and What Cites Them," published in Current Anthropology in 1984, Eugene Garfield of the Institute for Scientific Information ranked George Foster's "Peasant Society and the Image of Limited Good" (1965) as the second most cited article -- with 207 citations between 1966 and 1982 (see "Table 6"). As Garfield explained, "this paper discusses the cognitive orientation of peasants. It explains how their social premises and assumptions may prevent rapid economic development in peasant societies." The period from 1966 to 1982 was no doubt the paper's heyday but the latest Social Sciences Citation Index count for it is 370 citations, albeit presumably not all in anthropology core journals. 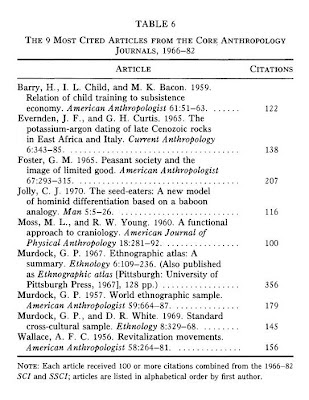 In one of the several commentaries following Garfield's analysis, Peter Hinton pointed out that Garfield's admirable restraint in interpreting the data "leaves open -- as it must -- the question of the meaning of citation patterns and sounds a timely warning that frequent citation does not necessarily indicate 'dominance' or influence. Foster's paper, one of the most cited pieces in Garfield's analysis, is a case in point. It is ironic that this paper, in which Foster develops the idea of 'limited good' to account for alleged peasant reluctance to accept new ideas, is frequently cited as an example of how not to go about understanding peasant societies." Here is how Foster explained his model:


By "Image of Limited Good" I mean that broad areas of peasant behavior are patterned in such fashion as to suggest that peasants view their social, economic, and natural universes -- their total environment -- as one in which all of the desired things in life such as land, wealth, health, friendship and love, manliness and honor, respect and status, power and influence, security and safety, exist in finite quantity and are always in short supply, as far as the peasant is concerned. Not only do these and all other "good things" exist in finite and limited quantities, but in addition there is no way directly within peasant power to increase the available quantities. It is as if the obvious fact of land shortage in a densely populated area applied to all other desired things: not enough to go around. "Good," like land, is seen as inherent in nature, there to be divided and redivided, if necessary, but not to be augmented.

In short, Foster's paper adopts the lump-of-labor fallacy claim and extends it to non-economic spheres of life. Actually, I would rate Foster's explanation of his image of limited good as more scholarly than any explanation of the lump-of-labor fallacy I have encountered. It is more conscientiously qualified and observational data are presented as supporting evidence. Nevertheless, as Hinton's commentary suggested, the model has been controversial, to say the least. In a 1975 article offering an alternative explanation for Foster's field observations, James R. Gregory summarized the critical reaction to Foster's article to that date. I have previously posted Gregory's summary in "Trickster Makes This Lump". As I mentioned there, I can find absolutely no evidence of disciplinary 'cross-pollination' where economists recognize the image as their own fallacy claim or anthropologists note the fallacy claim as the image's progenitor.

Two solitudes. What does this total silence say about the compartmentalization of thought in academia over the last 47 years? What does the lively controversy in anthropology suggest about the teeth-gritting conformism and groupthink in economics? What does it say about the 'cognitive orientation' of economists? And who the fuck cares other than the unemployed 'peasants' that the economist-lords dismiss with a pseudo-mathematical shrug?
Posted by Sandwichman at 3:40 PM