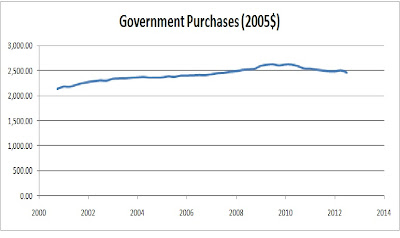 It took NBC a week to do so but they finally put up the interview with Paul Ryan, which Paul Krugman criticized:

I didn’t see Meet the Press, and there doesn’t seem to be a transcript available yes, but I hear that Paul Ryan declared it a proven fact that Keynesian economics has failed — and was, of course, not challenged on that assertion.

Since Krugman has already challenged any assertion that Keynesian economics failed, let me pick up the pieces and show the key part of the MTP exchange:

GREGORY: Yeah, I know. A lot of centrist economists who may disagree with you in some areas but agree about the imposing or the impending debt crisis. Some on the left like Paul Krugman disagree. He calls you a deficit scold and he calls you worse than that. But his point is that-- that you’re being alarmist about the deficit and its relationship to how the economy performs and how the economy grows. So here’s what he wrote in his column on Friday and let me get you to respond to it. “It was, in fact, a good thing that the deficit was allowed to rise as the economy slumped. With private spending plunging as the housing bubble popped and cash-strapped families cut back, the willingness of the government to keep spending was one of the main reasons we didn’t experience a full replay of the Great Depression.” And this balance now between austerity, which he believes you call for, and appropriate investment on the part of the government is still where the great tension is. REP. RYAN: Well, we can debate the efficacy of changing economics or not and I don’t obviously believe-- I think that that is pretty clear, it doesn’t work. We’re not preaching austerity. We’re preaching growth and opportunity. What we are saying is if you get our fiscal shift fixed, you preempt austerity. That’s the-- here’s what a debt crisis is. A debt crisis is what they have in Europe, which is austerity. You cut the safety net immediately. You cut retirement benefits for people who’ve already retired. You raised tax and slow down the economy, young people don’t have jobs. That’s the austerity that comes when you have a debt crisis. And when you keep stacking up trillion dollar deficits like this government is doing, it’s bringing us to that moment. Our job, our goal is to prevent and preempt austerity so we can get back to growth.

I guess it took MTP a week to post this transcript given how incredibly embarrassing it really is. Let’s start with the fact that we have been cutting government purchases (austerity) for the past couple of years, which is a major reason why the recovery has basically stalled. But Ryan is calling for more government spending cuts so we can avoid austerity? Does this alleged GOP economic guru even know what the word austerity means?
Posted by ProGrowthLiberal at 1:17 PM

Ryan: "What we are saying is if you get our fiscal shift fixed, you preempt austerity."

I suppose that "shift" is a misspelling? ;)

How can the statement be made that “government purchases have decreased” relate to increased government debt? It’s clear from the U.S. Flow of Funds reports that Federal government debt continues to increase. It is going into the economy, isn’t it? If not, we shouldn’t be doing it.