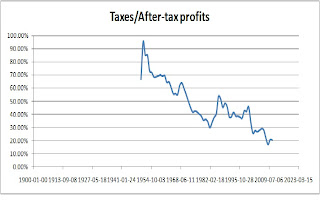 How did I miss A Global Revenue Grab from the folks at the Wall Street Journal’s editorial page?

Don't be fooled, because this is an attempt to limit corporate global tax competition and take more cash out of the private economy. In the U.S., the Obama Administration has made a five-year fetish of attacking successful American companies that dare to keep overseas profits overseas rather than pay America's 35% corporate rate (plus state taxes) ... This share has nothing to do with actual profits or evading the law, but rather a sense that governments can extract more revenue by exploiting what the OECD calls the "reputational risk" for companies of being labeled a tax evader. The politicians create the reputational risk for companies like Apple and then claim to want to save the same companies from it. Alas for the politicians, the tax data don't support their anecdotes. U.S. corporate tax payments as a percentage of GDP were 2.38% in 2011slightly above their 40-year average of 2.29%. As the nearby chart shows, corporate receipts over the last 30 years fell during recessions but rose again during expansions. The real story is how consistently revenues have stayed between 2% and 2.5% of GDP.

I just read a critique of the OECD’s proposal to limit “Base Erosion and Profit Shifting” from someone at Deloitte who was at least bright enough to know that the Wall Street Journal’s editorial page is “right wing”. But he was not bright enough to recognize pure spin when he saw it. Never mind that the Wall Street Journal is suggesting that Apple is not engaged in aggressive transfer pricing. I’ll leave that to Senator Levin’s capable hands. The chart showing that the ratio of corporate profits to GDP has been basically flat from 1981 to 2011 was classic Wall Street Journal misdirection. Besides the obvious question – why pick 1981 (when we had a White House devoted to letting corporations pay less in taxes rather than 1950 – we should also remember that corporate profits have been rising relative to GDP. So if the ratio of corporate taxes to GDP has been flat, doesn’t it stand to reason that the ratio of corporate taxes to corporate profits has declined? Fortunately, FRED provides an annual time series dating from 1950 to 2011 on this latter ratio. Take a look and judge for yourself!
Posted by ProGrowthLiberal at 11:12 AM

YOU SAY: "FRED provides an annual time series dating from 1950 to 2011 on this latter ratio. Take a look and judge for yourself!"

Where is this FRED chart?

The graph is at the top of the post.

I recreated it at FRED: http://research.stlouisfed.org/fred2/graph/?g=mgW