Still Confused About Inflation after All These Years

Woe to the economics profession, or at least the more responsible parts of it, which for decades has tried to explain the income-expenditure identity to any journalists willing to listen.  Every transaction has a buying side and a selling side; one person’s spending is another person’s income, and the sum of all the spending is the sum of all the income.  This needs to be adjusted for transactions that spill over national (and therefore accounting) borders, but otherwise it’s just an identity.

The immediate implication for inflation is that it makes no sense to wonder whether incomes will keep up with inflation.  Here are two ways to think about it, which of course are different versions of the same way.  First, the sum of spending is equally the sum of income.  If nominal spending rises by x% because of inflation, then nominal income does too.  Second, inflation is the average increase in prices, and wages are prices.  Naturally inflation can be accompanied by income redistribution, with some people coming out ahead and others behind, but there is no a priori reason why any particular group should benefit, or even why there should be any correlation between which group benefits in one period and which in another.

Journalists are supposed to know this by now.

But then we see pieces like today’s today’s New York Times/Economix post by Binyamin Appelbaum, and it’s right back to square one, or maybe one-and-a-half.  Granted, there is a paragraph of enlightenment:


To be clear, inflation by definition increases total income. Someone ends up holding the new money. The question is about distribution: Are workers able to secure the raises necessary to keep pace with inflation, or does the extra money simply pad profits?

Other than this, though, it’s all confusion.  Appelbaum keeps referring to wages as “income” and wonders whether income will keep up with prices.  He also throws out comments like


If the Fed drives up inflation, prices would rise first. Even if wages follow, the very people who most need help would feel the short-term pain most acutely. It would feel something like a temporary national sales tax.

Earth to Appelbaum: wages are prices.

Of course, the relationship between price inflation and nominal wage increases is a purely empirical matter, so let’s consult with uncle FRED: 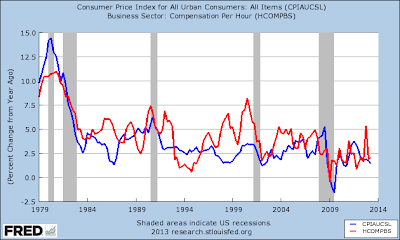 The blue line is the quarterly year-on-year percentage change in the consumer price index (CPI); the red line is the corresponding year-on-year change in nominal hourly compensation.  As you can see, they move largely in tandem.  A few specifics:

• At first, the Volcker disinflation of 1979-82 had little effect on nominal wages; after a couple of years both plunged together, with the decline in prices somewhat outpacing the fall in wages.

• There was an extended period in the latter 1990s during which real wages (wage growth minus inflation) rose.  This was due to the low unemployment of the Clinton boom; inflation during this period was unchanged.

• Other than this, the relationship is mostly a wash.

If the public, as Appelbaum quotes Shiller as saying, is misinformed about the relationship between inflation and wages, it’s the responsibility of the press to set them straight.  You don’t do that by musing on whether incomes can keep up with prices or, as he does toward the end, whether global labor market conditions will cause inflation to “punish” workers.

The big distributional effect from unanticipated changes in inflation has been and always will be between net lenders and net creditors, and it is useful to explore who these people are and how big the impacts on them are likely to be.  It is also true that even anticipated inflation can affect financial flows if contracts are fixed in nominal terms over long enough time periods, as in some defined benefit pensions.  But wages?  There is neither a theoretical nor an empirical reason to think much of anything.

Now here is the real problem beneath the problem.  Net creditors, which means those sitting on a pile of financial assets whose value depends on real interest rates, suffer a one-off loss every time expected inflation goes up.  If the Fed decides to boost its target, that loss will be substantial, like a one-time tax of all credit market holdings of 1-2 percent.  If the runup in prices exceeds the target, which of course it could, the loss is that much greater.  We are talking about a very large sum of money, and it is perfectly rational for the high net worth crowd to try to avoid it.  One practical strategy is to pay or otherwise reward pundits, reporters and even economists who sew confusion.  Spread the rumor that prices are one thing and wages are another.  Repeat the mantra that “inflation is the cruelest tax of all”.  Fill economics textbooks with endless pages about whether households fail to see that nominal wage increases are offset by consumption prices but nothing about whether they understand that consumption prices are offset by nominal wage increases.  (You know: inflation is bad because I have to pay more, but my wage went up because my employer knows how valuable I truly am.)

We live in a sea of deliberate misinformation about the effects of inflation.  Journalism should be the rock that stands up against the waves, not the waves beating down on the rock.
Posted by Peter Dorman at 5:30 PM

>>Even if wages follow, the very people who most need help would feel the short-term pain most acutely.>>

The very people who most need help are low paid workers without real bargaining power. They will most likely see higher prices without pay increases.

True, people as a whole are not hurt by inflation (ignoring menu costs, foreign trade, non-wage income), but the distributional impact can be very serious. It's even worse in light of growing inequality.

It's an empirical question whether most people are helped or hurt by inflation.

Would you feel better if he wrote "The very people who most need help would feel the short-term pain most acutely and are not likely to be helped by rising national income"?

Foosian: It's a matter of context. Of course, if someone is tied into a long-term income contract she will suffer from inflation, and the gains to others will be little consolation. But the article was about wages in general, and there is no reason to suspect that they will fall in real terms, nor even that there will be a transitory period in which they fall. None, not in theory or experience.

There is a reason to expect that people who hold large amounts of credit market assets will be hit. On balance, that should reduce income inequality, no? Not that I'm saying inflation is intrinsically a good thing -- it's not -- but the distributional consequences are not rocket science, and there's no virtue in trying to persuade those who are most likely to be relative distributional winners (net borrowers) that they should be fearful of these effects.

Incidentally, the primary cost of inflation is not menu costs (which are trivial in the digital age) or real exchange rate effects (if nominal rates can move appropriately), but the cost of engineering disinflation if price expectations continue to float upward.

Net creditors are likely to have significantly more economic and political power.

The problem with inflation is distributional. Incomes keep up with prices, but the median income may not. That seems a reasonable concern for many workers.

I'll repeat my question: Would you feel better if he wrote "The very people who most need help would feel the short-term pain most acutely and are not likely to be helped by rising national income"?

BTW, I tend to think that inflation will have a positive effect on median income, but that's an empirical question, not an accounting identity

Foosian, every economic policy will have distributional consequences. Those who come out on the short end are unlikely to be mollified by the observation that the distributional effects cancel out, or even that there are net gains to society. Monetary policy is no different. Except there is one pervasive distributional bias to monetary policy that dare not speak its name. Instead, what we get are intimations that exactly the opposite group, those who depend on wage income to survive, are somehow at risk.

I think there are several problems with this whitewash of inflation -- gee, how can it be a problem if expenditures equal incomes. I will just mention the simplest problem. Even if incomes do not suffer from inflation, savings do. Households have been forced to defend their wealth from inflation by minimizing savings. This obviously makes their financial situation fragile and endangers the economic prospects of producers as well as consumers.

A_S, please note that your "savers" are not being overlooked; they are the folks I referred to as net creditors. Their loss is the borrower's gain. What that means for the economy depends on the context. At the moment, deleveraging (saving) is an economic drag. This is not always true, of course.

Also note that savers can defend against anticipated inflation by purchasing financial assets that pay a return that reflects this inflation. That's why only changes in the anticipated rate of inflation, not its level, have distributional consequences.

In short, take some time to read an intro macro or monetary textbook. You might actually change some of your economic assumptions.

which uses 1982-84 dollar index, begins in 1960 and indicates avg. wkly earnings of production and nonsupervisory employees.