Back to Econ 101: Costs versus Transfers

Isn’t it interesting how the most rudimentary concepts supposedly covered in the first weeks of an economics principles course keep coming back to us mangled beyond recognition in expert debate?

Take this post by Uwe Reinhardt, as leading a leading authority there is on US health economics.  He shows us this rather typical graph portraying the number of Quality Adjusted Life Years (QALY’s, a measure that consolidates all health impacts into a single metric derived from utility theory) people can enjoy as a function of how much they spend to get it.  A low-cost medical intervention buys us one year, the next year requires a little more cost and so on until the marginal cost of providing a bit more healthy living zooms up out of sight. 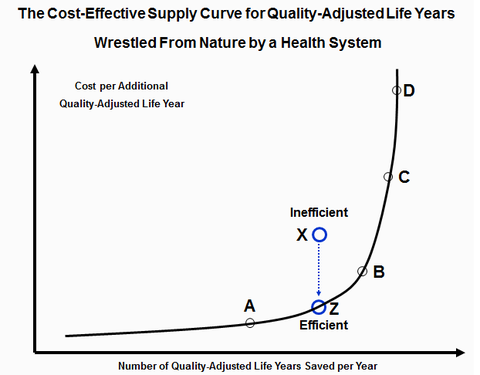 He’s interested in seeing to it we position ourselves at an efficient point along the curve rather than one above it, and he also raises the question of how far along this curve we should be willing to travel:


Is there a maximum price above which society no longer wishes to purchase added QALYs from its health system, even with the most cost-effective treatments (e.g., Point C)?

This issue is crystallized for him a recent report from an insurance advisory panel in California that determined a new hepatitis C drug “low value” compared to older drugs even though it is somewhat more effective—because it is being sold by its producer at $1000 a pill.  Here, says Reinhardt, is an example of society, or at least a portion of it with MD’s and financed by the insurance industry, saying enough is enough; we can’t climb that cost curve all the way to the top.

Just one problem though.  Reinhardt’s graphic is about cost, presumably social cost.  As we should have learned in our first econ textbook, this refers to the opportunity cost and disutility entailed in producing a good or service.  The $1000 charged for a single pill, while it covers resources consumed in R&D and direct production, in all probability has a hefty element of monopoly markup.  That’s the whole point of the patent system, after all.  And this markup is a transfer, not a cost.  We could well be on the flatter, left end of Reinhardt’s cost curve even as we shell out vast sums for this latest medical marvel.

Now I suppose you could argue that such transfers are needed to induce people to take up medical research as a profession, other people to provide their labs, etc.  That was apparently the topic of a debate between Reinhardt and Dean Baker, which Reinhardt refers to in his post.  But that’s a separate question.  It does not overturn the wise judgment of elementary economics on the distinction between a cost and a transfer.  It’s amazing that I even need to write this.
Posted by Peter Dorman at 1:55 AM

I am happy to find this post very useful for me, as it contains lot of important information. I always prefer to read the quality content and this thing I found in you post. Thank you for sharing. buy real instagram followers

This is a common fallacy among health economists. They virtually never distinguish between costs and rents.

As a dissident heretic (which means i dissent from the heresy, but that doesn't mean that i endorse the orthodoxy, because the law excludes the middle class in a non-commutative world) i personally am not sure from a 'sophisticated' view that costs and transfers are distinguishable (any more than employers and employed, owners and property (e.g. dogs), profit and exploitation).

On a general level they may be as one might say anpther year of life has value ---- but if you are in, say, pain, then that may not be true.

(Corrolies of this identity of cost and transfer are the identity of frequentist and bayesian analyses, entropy and gravity, why 'opportunity cost' is a myth, being no different from marginal utility or expectation value --- eg Sen's discussion of 'menu dependence', meaning that noone knows what opportunities or recipes really exist--its counterfactual, etc.)

The real thing lacking here --- in Uwe's curve---is defining the value of life. Sure, if we efficiently spend n dollars then we get m years of life, but how much is that worth?


( I personally do think (that at least my) life is almost invaluable, but I also think elements of personal responsibility are involved. Monopoly profits due to alcohol and drug cartels, like patents, do create incentives to save and invest in risky behaviors which have large future payoffs (eg the spice trade), but even so health experts know that too much sugar and spice are unhealthy. So, only those who are responsible are eligible for nearly infinite cost expenses for eternal life support ---WWJD?)

What point pn that exponential curve is optimal?
What are you transfering to cover the cost?
Perhaps as others have noted if we reduce health care costs, then more health care can be assumed, and more people can enjoy eternal life support. But then, as people like Robert Frank, Thaler, etc have noted due to positional factors related to utility functions, life becomnes increasingly valueless. The clost and for reaching certain values of the objective function shift.
Perhaps one solution wopuld be to ban one and 2 dimensional graqphs, as well as linear, exponential, power and other unsophisticated functions.