What In Hell Is Capital?

Dante condemned the merchant bankers of Florence to the seventh circle of Hell. Marx was more lenient -- attributing to monetary accumulation through usury only part of the responsibility for the dissolution of the old feudal relations of production.

"The idea of some socialists," observed Marx in his notebooks on Pre-Capitalist Economic Formations, "that we need capital but not capitalists, is completely false."

"The concept of capital implies the capitalist."

Let us consider the relationship of capital and wage labor not as something which has already reached decisive importance, and encroaches on production as a whole but as something which is still in the process of historical formation. We consider the original transformation of money into capital, the process of exchange between capital existing only potentially on one hand, and the free laborers existing potentially on the other. We then find ourselves naturally making the simple observation, with which the economists make great play — namely, that the side which appears as capital must possess raw materials, tools, and food enough to enable the worker to live before production is completed. Moreover, it would appear that accumulation — an accumulation prior to labor and not arising from labor — must have taken place on the part of the capitalist, which enables him to set the laborer to work and to maintain him in activity, as living labor power.

Urban labor itself had created the means of production, for which the gilds became as great an embarrassment as were the old relations of landed property in an improved agriculture, which was in turn partly the consequence of the greater sale of agricultural products to the cities, etc.

Other circumstances assisted the dissolution of the old relations of production, accelerated the separation of the laborer or the non-laborer capable of work, from the objective conditions of his reproduction, and thus advanced the transformation of money into capital. Such were, e.g., the factors which in the 16th century increased the mass of commodities in circulation, the mass of currency in circulation, creating new needs and consequently raising the exchange value of native products, raising prices, etc.

Nothing can therefore be more foolish than to conceive the original formation of capital as if it meant the accumulation and creation of the objective conditions of production — food, raw materials, instruments — which were then offered to the dispossessed workers. What happened was rather that monetary wealth partly helped to detach the labor power of the individuals capable of work from these conditions. The rest of this process of separation proceeded without the intervention of monetary wealth. Once the original formation of capital had reached a certain level, monetary wealth could insert itself as an intermediary between the objective conditions of life, now “liberated” and the equally liberated, but now also unfettered and footloose, living labor powers, buying the one with the other. As to the formation of monetary wealth itself, before its transformation into capital: this belongs to the prehistory of the bourgeois economy. Usury, trade, the cities and government finance which arise with them, play the chief parts in it.


The original formations of capital does not, as is often supposed, proceed by the accumulation of food, tools, raw materials or in short, of the objective conditions of labor detached from the soil and already fused with human labor -- not by means of capital creating the objective conditions of labor. Its original formation occurs simply because the historic process of the dissolution of an old mode of production allows value, existing in the form of monetary wealth, to buy the objective conditions of labor on one hand, to exchange the living labor of the now free workers for money, on the other. All these elements are already in existence. What separates them out is a historical process, a process of dissolution, and it is this which enables money to turn into capital. Insofar as money itself plays a part here, it is only to the extent that it is itself an extremely powerful agent of dissolution which intervenes in the process, and hence contributes to the creation of the plucked, objectiveless, free laborers.

Does the concept of "human capital" imply the human capitalist? From the perspective of Marx's analysis, such a concept would be a Bizzaro-world oxymoron:


The concept of capital implies that the objective conditions of labor — and these are its own product — acquire a personality as against labor, or what amounts to the same thing, that they are established as the property of a personality other than the worker’s. 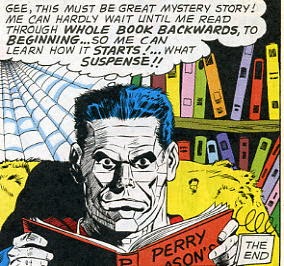 Posted by Sandwichman at 3:40 PM

A quotation from p. 125 of From Catastrophe to Chaos: A General Theory of Economic Disccontinuities, 1991, Kluwer, by me.

"What really is capital and what does it mean for value, growth, and distribution? Is it a pile of produced means of production? Is it dated labor? Is it waiting? Is it roundaboutness? Is it an accumulated pile of finance? Is it a social relation? Is it an independent source of value? The answers to these questions are probably matters of belief."

"The answers to these questions are probably matters of belief."

Nevertheless, different beliefs may have different consequences. Can I jump over this abyss? If I can't but believe I can, I fall into the abyss. If I can but believe I can't, my freedom is gratuitously constrained. If my beliefs are in accord with reality, I have both more freedom and more security.

Capital is a social relation between the majority of propertyless workers and the small class in society privately owning the means of production. This social relation imbues means of production with the social form of capital. Marx comments on this very point in Wage, Labor and Capital, "What is a Negro slave? A man of the black race. The one explanation is worthy of the other.