Have you noticed that most environmentalists (in the US at any rate) take a religious approach to their cause?  They see environmental problems, including of course climate change, as resulting from the low ratio of enlightened to unenlightened consciousness—too few who see the light, too many who continue in their earth-destructive ways.  Part of the solution is education: expose the miscreants to the facts, show them the horrors we are visiting on the natural world and how their behavior perpetuates it.  Beyond that, call them out for their selfishness, putting their own comfort ahead of general good, not to mention the sustenance of Mother Earth herself.

I was struck by this when reading Naomi Klein’s This Changes Everything: Capitalism vs the Climate.  Readers like me who were hoping to learn something about Klein’s take on the role of capitalism in the environmental crisis were disappointed; her target is “capitalist thinking”.  Capitalism is a name for a cluster of ideas and attitudes that poison the minds of those who damage the earth, and the book is a call for mass conversion to a different sort of consciousness.  (I’ve got a much, much longer critique/meditation on the book and what it says about our political moment which I hope to disseminate at some point.)

On a more immediate level, I’ve been grappling with the same mindset as I teach environmental graduate students.  In general, they are thoughtful and open-minded, but the pull of the conversion template is always there in the background.  When I introduce political economy as an approach to understanding environmental issues, I begin with a pair of slides.  First I show them what I call the “naive” view of how these things work, in which the ideas that inhabit people’s minds directly determine the state of the world: 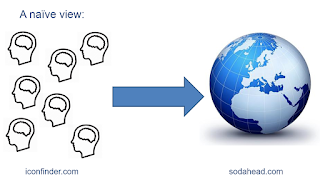 Then comes the social science view, which includes political economy.  Ideas are mediated by economic, political and social institutions, and these structural forces react back on how people think, too: 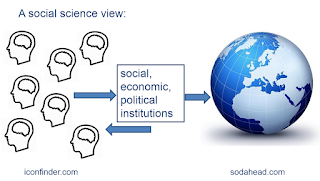 We get great discussions in class, but weeks later, when I read their exams and papers, I see a return to the original assumption: the core problem is unenlightenment, and the task of the environmental activist is conversion.  If only each of us understood the plight of “x” (a species, a treasured ecosystem, the earth itself), we would shop differently, change our diet, reduce our use of resources and become the solution.  Somehow the attention to laws, economic incentives, and the structure of power wanders.

To be clear, I think there’s always a need for more enlightenment in this world.  I’m a big fan of environmental education, which I think has had a large, positive influence on millions of people.  The problem is that this is not sufficient in itself, as the second slide should make clear.  Worse, to the extent they fixate on education/conversion as the sole pathway for social change, environmentalists fail to take on the political and economic aspects of the job.  Even worse—much worse—by assigning a moral reading to this enlightenment → social change template, the environmental movement gets bogged down in an unseemly and counterproductive obsession with virtue.

Why this conversion thing?  As far as I know, no one has studied the question systematically.  It would be nice if there were a body of empirical evidence, opinion surveys of environmentalists in different countries tracking these views over time.  Are some environmentalists more given to the conversion template than others?  Does the availability of collective action (more open political structures) diminish conversionism?  We need data!

In the absence of information, I can only speculate.  What I’m thinking at the moment is that, just perhaps, the view of environmental action as conversion has roots in personal experience.  Presumably those who become activists on behalf of environmental causes undergo their own process of conversion at some point.  Maybe it’s in school, studying environmental science or ethics, or in the field, doing research or service work, or simply exploring nature in play and recreation.  Whatever the trigger, something happens, and the beauty and necessity of the natural world pours in: another environmentalist is born.

These moments are wonderful.  There should be more of them.  Yet we also know there is a tendency to project our own experiences onto to the rest of the world, so our own conversion becomes a model for transforming society as a whole and how it treats the environment.  Social change is not a simple analog of personal change, however, so in this respect projection is unenlightening.

I am just speculating.  There are probably other hypotheses I haven’t thought of that are just as plausible, maybe more so.  Again, this is a topic that would benefit from empirical research.  As someone who teaches emergent environmental activists and practitioners, I’d like to know a lot more.
Posted by Peter Dorman at 12:25 PM

"Have you noticed that most environmentalists (in the US at any rate) take a religious approach to their cause?"

Not an welcoming first line. Have you ever noticed that most economists take a condescending know-it-all approach to their conversation?

Anyway, I've been arguing for a while that there is no necessary connection between the policy preferences that make up "the left". The political spectrum metaphor suggests that, like purple and blue are next to each other thanks to closely sized wavelengths, so to environmentalism and trade unionism have objective qualitites which place chemical next to each other.

My point has been that there is no physical quality underlying the political spectrum and that Trump demonstrates how things can be jumbled up.

Examples on this blog suggest that the quality of religious belief does provide an objective common element between environmentalists and trade unionists and believers that "big money" controls the world. That is to say, Bernie has a religious following.

But... Is it not the case that Ayn Rand acolytes behave in exactly the same way?

It is the strength of the Puritan tradition in the US. We are simply far more religious than pretty much all Europeans, as evidenced by the fact that among OECD nations, only Turkey has a higher percentage of people who reject evolution.

It goes back to the Puritans and their Shining City on the Hill, but also the long tradition of accepting religious refugees from around the world, deeply linked with our commitment to religious freedom, and its competitive model of religion: pick your religion at the great supermarket of religions in good old America.

So we simply have this much stronger evangelistic streak than much more secular Europeans. This was even shown in our initial environmental laws in the early 70s when most economists argued for Pigouvian taxes (this was before cap and trade) but we got straight command and control quantity rules (some of which later morphed into cap and trade systems, such as SO2). The political arguments at the time got down to religion: pollution is sin, and people should not be allowed to pay for sinning, even though the quantity limits were generally not set at zero emissions for most pollutants, so people were still being allowed to "sin."

Klein is in favor of a carbon tax, largely as a moral statement against the evils of polluting. She seems to think it would be paid entirely by fossil fuel companies, and the rest of us would be liberated to live our sustainable lives. At one point she goes so far as to say that the green energy transition can be financed by a tax on the *profits* of fossil fuel corporations. As economics it is bizarre, but it makes a certain kind of ethical sense. (It's about the amount of evil, not the amount of money.) I also think it says something about politics, but I'll save that for another time.

The current situation has plenty of ironies. Back in the early 70s it was the advocates of quantity controls, which are the basis for cap and trade (the cap part) who were more likely to take a semi-theological attitude and accuse their opponents of advocating letting people "pay to sin." Now the shoe seems to have shown up on the other foot, with people like Hansen taking a moralistic view that cap and trade is sinful and any right-thinking person should support his version of the Pigouvian tax. What can one say?

Peter - thanks. I guess she has never heard of the incidence of the tax. Or maybe that too is against her moral out view.