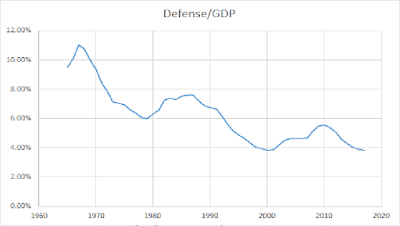 Our title is perhaps the most obnoxious line in the Hoover Five oped per some of the appropriately harsh comments to Cochrane’s post, which alas I did not cover here. Before I do so, let me turn the microphone over to Jonathan Chait:

It is a foundational belief of Republican Party doctrine that tax cuts cannot have any adverse impact on the national debt. Indeed, Republicans have invented a new language in which budget deficit does not actually mean the difference between revenue and outlay at all. It is a term used exclusively to express panic over social spending. Economists and intellectuals associated with the party are therefore required to, in essence, keep two different sets of books when discussing fiscal policy in public. In November, a group of Republican luminaries, including Michael J. Boskin, John H. Cochrane, John F. Cogan, George P. Shultz, and John B. Taylor co-authored an op-ed cheering on the Trump tax cuts. Isn’t it a little dangerous to permanently increase the deficit, especially during the peak of an economic expansion? Nonsense, they argued. The effect on interest rates of higher debt “is likely to be modest, given that the United States operates in an international capital market, which means that the impact of changes in interest rates resulting from greater investment demand and government borrowing are likely to be relatively small.” No need to worry your pretty little heads about interest rates, since international capital markets will supply as many buyers of Treasury bills as needed, forever. Party on! Now that the Trump tax cuts have passed, though, they have pivoted to a message of deep concern about rising debt. Boskin, Cochrane, Cogan, Shultz, and John B. Taylor have written another oped. It applauds the tax cuts and calls for more. Yet it warns that the failure to cut social spending will lead to catastrophe. Including higher interest rates

Well said! Now to defense spending. I could go all nominal like the Hoover Five and note that nominal defense spending rose by 90% from 2000 to 2017 but then nominal GDP rose by 88.5% over the same period. So we have updated the graph provided by Jeffrey Miron:

Figure 6 Defense Spending as a Percentage of GDP

For both series – about half of this increase is from inflation with real GDP and real defense spending both up by just under 40%. Our update of Miron’s graph reminds us that defense spending as a share of GDP has been a huge driving force in terms of deficits over the past 53 years. During the Vietnam War, this ratio soared to 11% but fortunately fell to 6% by 1980 when we still fighting the Cold War. Saint Reagan greatly increased defense spending even relative to GDP as he showered tax cuts for the rich – which led to a huge increase in the debt/GDP ratio. We achieved a partial reversal of the debt/GDP ratio in part because we did raise taxes and in part because of the Peace Dividend which lowered defense spending as a share of GDP to less than 4% by 2000. Of course George W. Bush had his misadventure in Iraq so defense spending rose relative to GDP all of course “paid for” by more tax cuts for rich people. This most recent spike in defense spending/GDP has again fortunately been reversed leaving defense spending/GDP at less than 4%. For five economists who think we need to lower government spending – one has to wonder why they think defense spending has been “depleted”. Could it be that their political masters insisted on this bizarre line? We earlier noted the Vietnam War so maybe we should turn to Country Joe & The Fish

now come on wall street don't be slow, why man this's war a-go-go,there's plenty good money to be made, supplyin' the army with the tools of the trade

Posted by ProGrowthLiberal at 1:10 PM

just hope and pray that when they drop the bomb, they drop it on the Viet Cong. And it's 1,2,3, what are we fightin' for? Don't ask me 'cause I don't give a damn; next stop is Viet Nam...