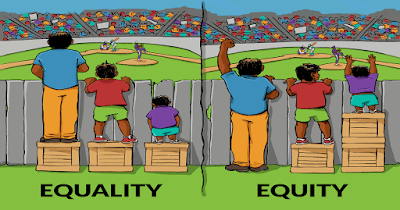 Benjamin Studebaker (hat tip Naked Capitalism) doesn’t like it at all: “I hate it so much.”  But his complaints, about the way the graphic elides classic debates in political theory, strike me as being too redolent of grad school obsessions.  The graphic is not trying to advance one academic doctrine over another; it just makes a simple case for compensatory policy.  I agree in a general way with this perspective.

Consider the Americans with Disabilities Act of 1990, which mandates special facilities in public buildings to accommodate people in wheelchairs or facing other mobility challenges.  This is unequal treatment: extra money is spent to install ramps that only a few will use, rather than for amenities for everyone.  But it’s a great idea!  Yes, compensation is concentrated on a minority, but it aims to allow everyone to participate in public activities, and in doing this it embodies a spirit of solidarity that ought to embrace all of us.  By making a simple, intuitive case for focused compensation, the graphic captures the spirit behind the ADA and many other policies that take account of inequalities that would otherwise leave some members of the community excluded and oppressed.

Unfortunately, however, there are serious limitations to the graphic; above all, it embodies assumptions that beg most of the questions people ask about compensatory programs.  Some are challenges from conservatives of a more individualistic bent, others might be asked by friendly critics on the left, but all are worthy of being taken seriously.

1. Watching the game over the fence is binary: either you can see it or you can’t.  In the real world, however, most activites are matters of degree.  You can learn more or less of a particular subject in school, have a better or worse chance of getting the job you want, live in a bigger or smaller house or apartment.  How much compensation is enough?  At what point do we decide that the gains from ex post equity are not large enough to justify the other costs of the program, not only monetary but possible conflicts with other social objectives?  Every teacher who has thought about how much extra attention to give those students who come to the classroom with extra needs has faced this problem.

2. Watching the game is passive, an act of pure consumption.  Things get more complex when inequalities involve activities that produce goods of value to others.  For instance, how would the graphic address compensatory programs for the baseball players?  Yes, a player from an underserved, overlooked community should get an extra chance to show they should be on the team.  But should the criteria for who makes the team be relaxed?  How and how much?  In case you haven’t noticed, this gets to the core of debates over affirmative action.  Again, I am in favor of the principle of taking extra steps to compensate for pre-existing inequalities, but the graphic offers no guidance in figuring out how far to go in that direction.

3. Height is a largely inherited condition, but what about differences in opportunity that are at least partly the result of the choices we make ourselves?  This is red meat to conservatives, who denounce affirmative action and other compensatory policies on the grounds that they undermine the incentive to try hard and do one’s best.  I think this position is too extreme, since inherited and environmental conditions are obviously crucial in many contexts, but it would also be a mistake to say that individual choices play no role at all.  Again we are facing questions of degree, and the graphic, with it’s clear intimation that inequality is inborn and ineluctable, doesn’t help.

4. The inequality depicted in the graphic is height, which is easily and uncontroversially measured.  Most social inequalities are anything but.  Student A went to a high school with a library; student B’s high school didn’t have one.  That’s a meaningful inequality, and if an opportunity can be awarded to only one of them, like entrance into a selective college program, it ought to be considered.  But how big an effect should we attribute to it?  Damned if I know.

5. There is no real scarcity facing the three game-watchers in the graphics.  There are enough boxes to allow everyone to get a good view and enough fence space for everyone to share.  In the real world neither tends to be true.  Resources that can be devoted to compensatory programs are limited, especially on a global scale, which, if you’re really an egalitarian, is how you should think about these things.  Even locally, the money often runs short.  The college I used to teach at could be criticized for not doing enough for students from low income and rural backgrounds with weak K-12 systems (I certainly did), but even with the best of intentions the money was not there.  Of course, where the goods to be distributed are competitive, like slots in a school or job openings at a company, the problem is that there’s not enough fence space to go around.  Yes, we should take action to provide more opportunities and reduce the competitive scarcity.  No, this won’t make the scarcity go away completely.

6. The graphic shows us three individuals and asks us to visually compare their heights.  America has a population of over 320 million, and even “small” communities can have a cast of thousands.  Surely we are not expected to make individual calculations for every person-by-person comparison.  No, those using the graphic usually have in mind group comparisons—differences requiring compensatory interventions according to race, class, gender, ability status, etc.  But while that makes things easier by reducing the number of comparisons, it makes everything else much harder to figure out: How do we measure group advantages and disadvantages?  How do we account for intersections?  Are they additive, multiplicative or something else?  Do all members of the group get assigned the same advantage/disadvantage rankings?  If not, on what criteria?  These are tremendously difficult questions.  I am not suggesting that they force us to abandon an egalitarian commitment to substantive, ex post equality—quite the contrary, in fact.  We do have to face them if we want to reduce the inequality in this world.  My point here is that, by depicting just these three fans watching a baseball game over a fence, one tall, one medium, one short, the graphic is a dishonest guide to navigating actual situations.

My bottom line is that, while I agree with the spirit of the graphic that policies, whether at a single office, a large institution or an entire country, should take account of the inequalities people face in real life and try to compensate for them, how and how far to go is difficult to resolve.  Achieving ex post equality is complicated in the face of so many factors that affect our chances in life, and on top of this, equality is only one of many values we ought to respect.  The real world politics of affirmative action, targeted (as opposed to universal) benefit programs and the like reside in these complexities.  The equity graphic conveys the initial insight, but the assumptions packed into its story make it harder rather than easier to think through the controversies that bedevil equity politics.
Posted by Peter Dorman at 5:39 PM

Peter,
Off topic, but I wanted to thank you for recommending Stephen Gardiner's book "A Perfect Moral Storm." The format wasn't quite what I expected, but I liked the logical structure of the book. My only complaint is that at times it was a bit repetitive. That said, he makes a powerful moral argument. It struck me that only someone named Thrasymachus (or Donald Trump) could be dismissive of the ethical problems he raises.

David Ricardo defined the task of economics back in 1821: “To determine the laws which regulate this distribution [between rent, profit, wages], is the principal problem in Political Economy.” (Principles, p. 5)

Ricardo failed and so did economists to this day.#1 Neither orthodox nor heterodox economists know what profit is and by consequence, they cannot solve the “principal problem in Political Economy”.

The reason for the failure of economists is trivial: economists are too stupid for the elementary algebra that underlies macroeconomics.

The axiomatically correct macroeconomic Profit Law is given by Q=Yd+(I−S)+(G−T)+(X−M). With regard to the State, the Profit Law boils down to Q=(G−T), i.e. Public Deficit = Private Profit.

Public deficit-spending/money-creation is a free lunch program for the Oligarchy.#2 The fact is that the so-called free market economy is already for a long time on the life support of the State. Profit is in the main produced by public deficits. Financial wealth grows in lockstep with public debt. The Oligarchy, in turn, uses the opulent free lunches to corrupt what remains of the State’s legislative, executive, judiciary institutions.#3

Needless to emphasize that economists, too, work for the Oligarchy. Naive MMTers, who present themselves as Progressives and propagate deficit-spending/money-creation do not know or do not care that their policy is to the detriment of WeThePeople.#4 They instead enthuse about the blessings of a Job Guarantee or a Green New Deal.

It is economists themselves who work ― intentionally or unintentionally does NOT matter ― for the growing inequality of income and wealth.

#3 Criminals and the monetary order
https://axecorg.blogspot.com/2019/10/criminals-and-monetary-order.html