The story has been told that Martin Luther invented the doctrine of the "calling" and that John Calvin ("my friends call me Jean") intensified it with his doctrine of predestination. Subsequent pastoral literature softened the predestination blow with the Protestant ethic that working hard and succeeding would show that you were one of the elect. Max Weber told that story.

It was, of course, a fable. But that is beside the point. Max Weber's fable wallowed in relative academic obscurity and sports clichés until... [wait for it]... 1971 when Dick Nixon dusted it off as a cudgel to bludgeon those folks driving around in their Welfare Cadillacs -- we all know who they are -- and the nattering nabobs of negativism enabling them. Pure backlash dog whistle.

“Keep religion out of it,” Nixon told a speechwriter who labeled it “the Protestant ethic” for a Labor Day address in 1971, “Let's just call it the work ethic.”

I would like you to join me in exploring one of the basic elements that gives character to a people and which will make it possible for the American people to earn a generation of prosperity in peace.

Central to that character is the competitive spirit. That is the inner drive that for two centuries has made the American workingman unique in the world, that has enabled him to make this land the citadel of individual freedom and of opportunity.

The competitive spirit goes by many names. Most simply and directly, it is called the work ethic.

As the name implies, the work ethic holds that labor is good in itself; that a man or woman at work not only makes a contribution to his fellow man but becomes a better person by virtue of the act of working.

That work ethic is ingrained in the American character. That is why most of us consider it immoral to be lazy or slothful-even if a person is well off enough not to have to work or deliberately avoids work by going on welfare.

That work ethic is why Americans are considered an industrious, purposeful people, and why a poor nation of 3 million people, over a course of two centuries, lifted itself into the position of the most powerful and respected leader of the free world today.

Recently we have seen that work ethic come under attack. We hear voices saying that it is immoral or materialistic to strive for an ever-higher standard of living. We are told that the desire to get ahead must be curbed because it will leave others behind. We are told that it doesn't matter whether America continues to be number one in the world economically and that we should resign ourselves to being number two or number three or even number four. We see some members of disadvantaged groups being told to take the welfare road rather than the road of hard work, self-reliance, and self-respect.

The New York Times was on to the hustle: 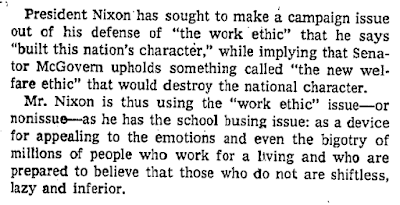 But the chattering classes couldn't resist the work ethic mantra -- pro or con. 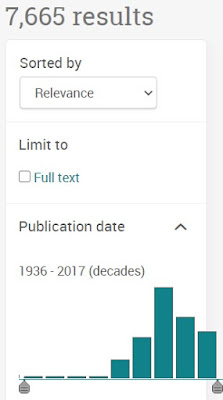 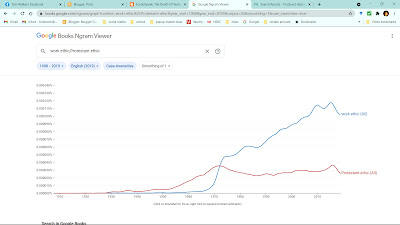 Who invented the "work ethic"?

Posted by Sandwichman at 3:30 PM

Happy Easter, but now get back to work!

Luther argued that everyday work is imbued with spiritual significance stating that the works of monks and priests, however holy and arduous they may be, do not differ on whit in the sight of God from the works of the rustic laborer in the field or the woman going about her household tasks…all works are measured before God by faith alone.

In an article entitled “The Doctrine of Vocation: How God Hides Himself In Human Work,” Gene Edward Veith outlines how Luther practically applied the newly rediscovered biblical doctrine of work.

Veith references one of Luther’s examples in particular: God uses vocation to give us our daily bread. Our food comes from the hands of farmers, bakers, and distributors. Explaining this example of Luther’s, Veith writes,

In effect, the whole economic system is the means by which God gives us our daily bread. Each part of the economic food chain is a vocation, through which God works to distribute his gifts.

In this example, Luther systematically laid out all the roles that go into producing food. When I read this example, it raised several questions in my mind:

What other important processes can we dissect in a similar manner?
What chain is your work a part of?
How might you begin to see the end result as a blessing from God, and your work as integral to bringing about that blessing?
The key, as Luther explained, is seeing our work as essential to carrying out what Jesus called the greatest commandments in Matthew 22: 37-39:

As Hugh Whelchel writes in How Then Should We Work,

According to Luther, we respond to the call to love our neighbor by fulfilling the duties associated with our everyday work.

How does your everyday work fulfill the call to love your neighbor?

The work ethic has to do with worshipping God. Way toong to explain but you are on the wrong track

A fine essay. The question for me would be the purpose of an ethic of work, whether entirely for the sake of self or for self in a community.

I appreciate this essay.

Richard Tawney wrote a book on this. tut tut

I'm not saying those people didn't say they what they said. I'm just saying it was blowing in the wind until Richard M. Nixon made it his official dog whistle campaign theme. He picked it up from George Wallace, by the way, who was politically savvy enough to realize that "segregation today, segregation tomorrow, segregation forever" wouldn't resonate on the national stage the way it did in Alabama. The work ethic was code for hard working, tax paying, God fearing, patriotic white folks who resented WHAT THEY IMAGINED was T-bone steaks being doled out to "strapping young bucks" (Reagan).

The "work ethic" appeared ALMOST NEVER in American newspapers prior to around 1969. It became a regular feature after Labor Day 1971. Richard Tawney, Max Weber, and John Calvin didn't have anything to do with that timing.

well living down under I don't know about that.

given your terrible education system ( 😊 ) I'm sure people could understand how the work ethic thrived in the south but not the north.
Trumpism before Trump?

Given your terrible education system ( 😊 ) I'm sure people could understand how the work ethic thrived in the south but not the north.