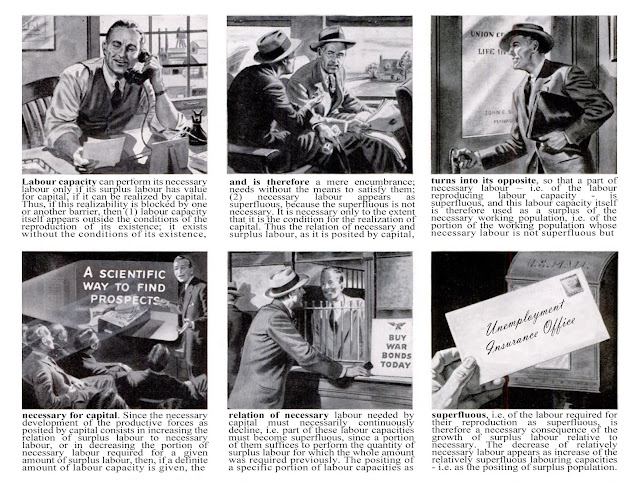 How many Trained Marxists™ know there is no "socially necessary labour time" in the Grundrisse? I didn't. When researching the provenance of the term, I was surprised to discover that it was present in neither the Grundrisse nor Marx's Contribution to a Critique of Political Economy. The latter book had a lot of approximations, though, and a pithy disclaimer about what Marx meant -- and didn't mean -- when referring to categories of social labour:

The specific type of society Marx had in mind was, of course, capitalism. The exercise of searching for terminology that wasn't there focused my attention on passages that otherwise might appear more than a bit obscure. Back in July, I identified the section titled "Necessary labour. Surplus labour. Surplus population. Surplus capital." as "the topsy-turvy concept of socially necessary labour time in embryo!"

A month later I noticed that Engels, in discussing the analytical importance of socially necessary labour time, had stated it, "already contains in embryo the whole capitalist form of production, the antagonism between capitalists and wage-workers, the industrial reserve army, crises." It's a chicken and egg question as to which embryo contains the other in embryo.

Whenever I make an earth-shattering, original discovery, I am prudently suspicious that I have only learned something I hadn't known was common knowledge in the specialized literature. It turns out that only a handful of writers have touched on the connection between Marx's category of socially necessary labour time and the fragment on surplus population and surplus capital. Fabian Arzuaga's "Socially necessary superfluity: Adorno and Marx on the crises of labor and the individual" contains the most extensive discussion of the topic. I highly recommend.

In the graphic at the top of this post, I have broken up the said passage from the Grundrisse into six captions of an almost irrelevant repurposed advertisement from a 1940s LIFE magazine.

I say almost irrelevant because the original ad featured a story about an over 50-year old middle manager who fears imminent redundancy at his current job and embarks on a new career as an insurance salesman. There is, of course, a subtle subtext to the appropriation of this image regarding the actuarial link between life insurance and population statistics, but such allusions can be left to the aficionados of Sandwichmania.

The original passage as a whole was, in effect, a "run-on paragraph" that could have easily been subdivided into six or more coherent paragraphs. I took a third of that passage and divided it into six segments of between 48 and 57 words each to replace the original insurance company advertisement's captions.

The breaks between segments was determined by physical fit in the format rather than sentence structure or flow of the argument. The resulting staccato and arbitrary emphasis of first words creates discrete units of meaning that are nevertheless connected by the continuation of the sliced sentences from one segment to the next:

Labour capacity can perform its necessary labour only if its surplus labour has value for capital, if it can be realized by capital. Thus, if this realizability is blocked by one or another barrier, then (1) labour capacity itself appears outside the conditions of the reproduction of its existence; it exists without the conditions of its existence,

and is therefore a mere encumbrance; needs without the means to satisfy them; (2) necessary labour appears as superfluous, because the superfluous is not necessary. It is necessary only to the extent that it is the condition for the realization of capital. Thus the relation of necessary and surplus labour, as it is posited by capital,

relation of necessary labour needed by capital must necessarily continuously decline, i.e. part of these labour capacities must become superfluous, since a portion of them suffices to perform the quantity of surplus labour for which the whole amount was required previously. The positing of a specific portion of labour capacities as

For social labour, under capitalism, it is the creation and realization of ("superfluous") surplus labour that is necessary, which makes the performance of labour merely required for subsistence superfluous if and when it does not create surplus value -- "the relation of necessary and surplus labour, as it is posited by capital, turns into its opposite."
The inversion of the necessary and the superfluous in Marx's analysis here is totalizing. It is not only that the workers who can offer capital no realizable surplus labour are redundant but also direct producers of subsistence goods for those superfluous workers are likewise superfluous, at least as far as the production of subsistence goods.
It is not incumbent upon all superfluous labour capacity to become unemployed. Thomas Chalmers's notion of the "disposable population," which Marx discussed just a bit earlier, is applicable here. Marx alluded to Chalmers when he referred to the "population fanatics" but he dismissed this group as "idlers, whose business it is to consume alien products and who, since crude consumption has its limits, must have the products furnished to them partly in refined form, as luxury products."
What Marx omitted there is that the workers employed in producing those luxury products are not idlers. They are presumably craftspeople who could otherwise be employed producing the machines that enable capital to reduce the duration of necessary labour time and thus increase the relative proportion of surplus labour time. This latter is what Marx was presumably referring to when he discussed the application of "all the powers of science and nature... to make the creation of wealth independent (relatively) of the labour time employed on it."
To be continued...
Posted by Sandwichman at 5:27 PM

What am I missing here?

What then is socially necessary labour for Marx?

I really like this essay, but I do not know how to answer my question and I think an answer important to have?

He never used either of the exact terms in the Grundrisse or A Contribution to the Critique of Political Economy.

[ Of course, and there is my mistake in reading * and misunderstanding. Understanding this was important for me.

* I will mark the passages.

Thank you so much, again. ]

[ Perfect, I marked the text and can understand what I did not before. ]