Infrastructure week: organs of the human brain, created by the human hand 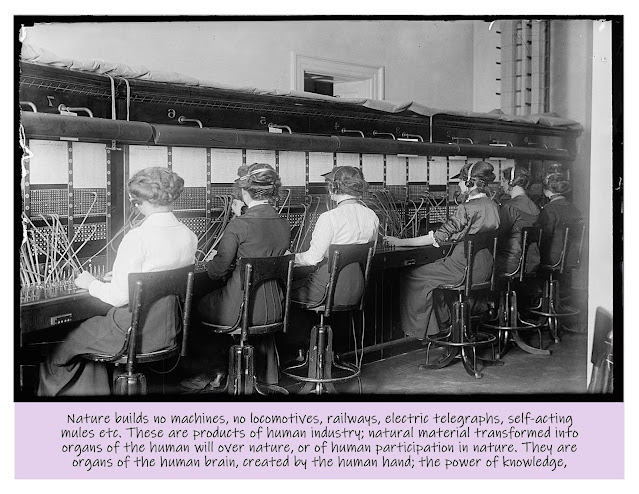 Who owns general social knowledge? Who owns the general intellect? Alf Hornborg pointed out that without the fuel to run it, a tractor is simply a piece of sculpture. It is not even a sculpture, though, if there is no one to design it and build it and operate it, let alone to design and manufacture the tools needed to build the tractor and so on.

Marx's list of things nature does not build, "machines... locomotives, railways, electric telegraphs, self-acting mules etc." is echoed in the next paragraph, "railways, canals, aqueducts, telegraphs etc." but this second time explicitly excluding of "the machinery directly active in the direct production process."

Or, another translation, from the collected works:

Who owns the general social knowledge?

[ Please explain this, since I am lost after several readings. ]

[ No, I do not understand even though the writing is clear. Please explain when possible. ]

Well, I tried again but I do not understand the "crisis theory" as explained. The relationship makes no sense as yet.

Marx was making an analogy between the above relationship and the relationship between productivity in the final goods industries and the magnitude of labour time -- both living and objectified in machinery and raw materials -- in the industries producing fixed capital, that is machines, railroads, canals etc.

Productivity gains in the direct goods producing industries releases workers from employment in those industries. This is self-evident because if workers weren't released, there would be no available labour force to be employed in the industries producing what mainstream economists call intermediate goods.

Perhaps it would help to compare Marx's analysis here to the section in chapter 15 of Capital on machinery and modern industry, section 6, where Marx discussed "the theory of compensation as regards the workpeople displaced by machinery." Bourgeois political economists "insist that all machinery that displaces workmen, simultaneously and necessarily sets free an amount of capital adequate to employ the same identical workmen." Marx shows why that is not the case. Here is a long quote from Marx that explains why the apologists of capitalism are wrong (by the way, his argument is closely related to my refutation of the alleged lump-of-labour fallacy):

The comment limit won't let post the quotation here so I have made a page for it.

What a wonderfully clear description-explanation. I understand and now for several additional reading of both pages.

Thank you, thank you.

You are very welcome, anne.

All this fine, fine work should prove especially valuable, since the intellectual history here is being emphasized by Chinese social scientists as China goes along the development path marked from about 1977 on. I fine your writing a revelation.