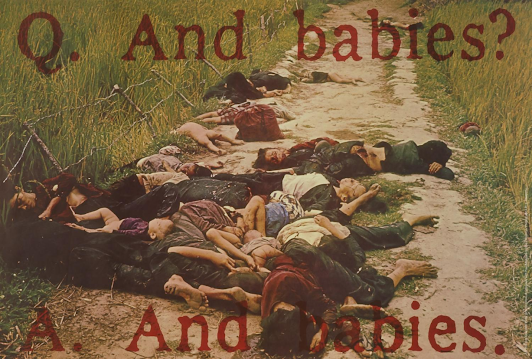 Uvalde = My Lai. This is not hyperbole. War crimes are an inevitable byproduct of war. Mass shootings are an inevitable byproduct of militarism and a militarized culture.
The same political process that led to and perpetuated the war in Vietnam continues to perpetuate the slaughter of innocents in American schools, supermarkets, nightclubs, subways, and synagogues.
It is not just the "extreme right" doing this. It is the cultural consequence of the political aspects of full employment. It is the result of the pursuit of full employment through a perpetual war economy, as Michal Kalecki warned about 80 years ago. I posted Kalecki's Political Aspects of Full Employment to EconoSpeak in 14 installments 13 years ago. If anybody wants to argue "we're not really doing that," please explain to me what the meaning is of $780 billion defense department appropriations.
Seventy-two years ago, Leon Keyserling's contribution to NSC-68, which advocated the tripling of U.S. military spending, consisted of arguing that the increased spending would pay for itself through additional tax revenues that could be siphoned off from an economy whose growth would be stimulated by the armaments spending that the additional tax revenues would pay for. A perpetual motion machine!
I'm sure Keyserling's scheme had nothing to do with Kalecki's critique. But just to be sure, I would recommend that folks read Kalecki and read the sources on Keyserling and NSC-68 and think about the immense military expenditures and the associated deficit spending so crucial to keeping the economy growing and then explain to me why there is no such thing as "military Keynesianism."
If we admit that military spending has a stimulating effect on the economy and admit that such spending also molds the economy in certain guns v. butter directions, then it has to be asked, why should we assume all this militarism and militarization has no effect on the culture? Support our troops! But don't just support our troops -- applaud our invasion of Iraq. But don't just applaud our invasion -- wear the camo, buy the gear, wave the flag, drive the pickup, shoot the gun...
And babies?
In a speech he never gave 70 years ago, General Dwight D. "Ike" Eisenhower mused about the consequence of the view that prosperity depended on arms production:

There is in certain quarters the view that national prosperity depends on the production of armaments and that any reduction in arms output might bring on another recession. Does this mean, then that the continued failure of our foreign policy is the only way to pay for the failure of our fiscal policy? According to this way of thinking, the success of our foreign policy would mean a depression.

Ike's speech was pre-empted by the scandal that forced Dick Nixon to go on national T.V. to deliver his famous "Checkers" speech. Ike's invocation of foreign policy failure as the price for economic prosperity overlooked the other half of the equation, as Kalecki had defined it.

It wasn't simply that deficit spending on the military was acceptable to big finance and industry. More fundamentally, they objected to deficit spending that underwrote the social wage and thus undermined their domination of workers.

Posted by Sandwichman at 5:24 PM

If anybody wants to argue "we're not really doing that," please explain to me what the meaning is of $780 billion defense department appropriations....

The Defense Department budget for 2022 ran at $906.9 billion in the first 3 months and will be higher from there for the rest of the year:

Defense spending was 57.8% of federal government consumption and investment in January through March 2022. *

Defense spending was 21.6% of all government consumption and investment in January through March 2022.