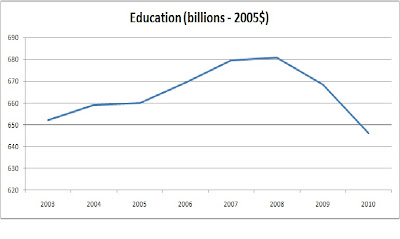 Mitt Romney apparently agrees with President Obama on extending the 3.4% interest rate on student loans, which puts both of them at odds with Republicans in Congress. Of course, we will have to wait and see if Mr. Romney shows any real leadership in helping the President overcome the opposition in Congress from his own party. I would humbly submit that this is only a very small step in restoring the recent damage to our education system. Our chart shows the decline in real government spending using data from this source (see Table 3.15.6. Real Government Consumption Expenditures and Gross Investment by Function). Phil Oliff and Michael Leachman documented how state and local government support of elementary and high school education has been declining since the recession. Diane Epstein discussed what the Ryan budget would mean to education spending a month ago. Pell Grants, which already have seen declining values relative to college costs, are slated to be drastically reduced. Head Start funding will also be reduced. Of course, most of what public commitment to education comes from state and local governments, but the Federal government can reverse these recent cuts with a greater commitment to Federal revenue sharing. And the bonus would be that we might avoid doing further damage to the economic recovery ala austerity. In other words – if Mr. Romney wants to really lead, then he will insist that we reject this Ryan budget.
Posted by ProGrowthLiberal at 12:45 PM

Your website is for sure worth bookmarking.
compare car insurance rates

I conclude, have selected a smart and surprising website with fascinating material.
Ivy League tutoring

Hey to everyone, it’s my first visit of the blog site; this blog includes awesome and actually best info for the visitors. new gold ira account

The problem is that you provide may be worth our time and also effort.
silk clay

Your blogs are truly awesome I have no words to praise for your blogs.
disadvantages of solar energy

I believe this is actually the most useful blog I've been through this entire day.
free riot points code

Your website is for sure worth bookmarking.
online cash loan

I'd be trampled if all sites gave articles like these awesome articles.auto insurance quote

I conclude I have selected the smart and inconceivable website along with interesting stuff.
pikavippi

It is rather really useful moreover as motivational information on my legs. I’m merely a first amount of time in blog site and looking for greater guide much like your publishing.


It is rather really useful moreover as motivational information on my legs. I’m merely a first amount of time in blog site and looking for greater guide much like your publishing.
linemarking melbourne | line marking melbourne

Thanks for your beyond belief blogs stuff.
weight loss supplements for women

Your way to enlighten everything on this blog is actually pleasing, every person organise to effectively be well known with it, Thanks a large deal.
http://www.hknightlifeescort.com/.

Nice work. Very well described. This information is very useful. I am very impressed. Thanks for sharing. For more information visit Student zoom

Regarding all aspects the blog was perfectly nice.

The information you have given in the blog really marvelous and more interesting. life insurance rates

I constantly emailed this site post page to all my friends, because if prefer to read it then my all friends will too.
credit people

This stuff is down t earth, hats off buds out there. vietnam holiday

This stuff is down t earth, hats off buds out there. vietnam travel

An unbelievable blog. This blog will indisputably be definitely recommended to my friends as well.anonymous browsing

Your website is terribly informative and your articles are wonderful.

Wonderful, just what a blog it is! This blog has provided the helpful data to us continue the good work.
buy twitter followers UK

Nobody can reject the info you have given in the blogs, this is actually a great work.
buy twitter followers UK

I love all details that you give in your articles.
buy twitter followers UK

This blog post is really great; the standard stuff of the post is genuinely amazing.
Competitor - linden method (search volume = 1600)

These are the great blogs; I assure you that I really enjoyed a lot in reading.
Generic Medium Competition - shortness of breath anxiety (search volume = 2400)

congratulations guys, quality information you have given!!! replica watches

The Info in the blog is out of this world, I so want to read more.0green coffee bean extract weight loss

I suppose this info is completely unique.vietnam holiday

Fascinating information I haven’t been experienced such information in quite a long time. hair loss

Congrats you individuals are doing with this blog site.payday loans no credit check

I certainly appreciate your stuff provided in the blogs.luxury Villas Marrakech

I am sure you have a great fan following out there. Medical Negligence Claims