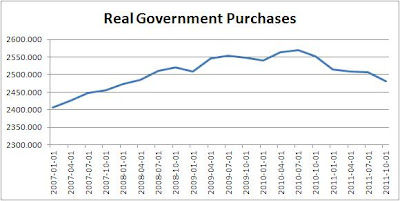 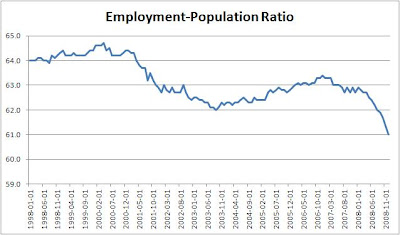 Spencer seems to be an Angry Bear over some chart from Greg Mankiw – and maybe he should be:

I see that his blog Mankiw shows a chart of the employment population ratio to make a comment about the "so called recovery". But he selected the start date of the chart so that you could not see that during the eight years of the Bush administration the employment-population fell from 63.0 to 60.3, a 2.7 drop. Since Obama took office the employment-population fell from 60.3 to 58.6, a 1.7 drop. The ratio has done poorly under both administrations, but people who live in glass houses should be careful about throwing rocks.

But let’s be honest – this is an awfully slow recovery. I would argue the reason for this is a lack of fiscal stimulus as demonstrated in our first graph showing real government purchases. Of course, Team Republican wants us to believe that we have too much government spending. I wish one of the actual economists on Team Republican would be candid enough to admit that days after Barack Obama was elected President he called for a much more vigorous stimulus policy only to find that Mitch McConnell would choose to filibuster this proposal to death. Then again – such honesty would get one kicked off Team Republican.
Posted by ProGrowthLiberal at 1:18 PM

Superb article I adore your own write-up; enjoy the way you defined things, your are performing a fantastic career many of other people like you by way of of which style of informative sites produce understanding to help us linked to many things. When i study another exciting blogs from your internet websites and My business is much fascinated with all your blogging and site-building knowledge, I furthermore begun to compose write-up and this variety conversation genuinely aid everyone out and about. When i by now added the page as well as shared your own sites for you to my own fellow workers besides myself however all of them including the writing a blog ability, expect an individual produce additional interesting weblogs such as this one particular and enjoy for your long term websites.