The Employment to Population Ratio by Gender 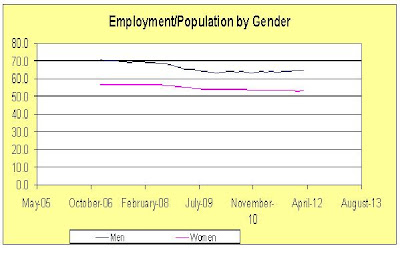 Treasury Secretary Tim Geither weighs in on Mitt Romney’s claim that President Obama has waged a war on women:

Treasury Secretary Tim Geithner on Sunday derided Mitt Romney’s argument that it’s President Obama who is waging the “real war on women” as “ridiculous” and based in fiction. “It’s a ridiculous way to look at the problem,” he said on ABC’s This Week. “And this is a political moment and you’re going to be seeing — just to borrow a line from Mario Cuomo — ‘You’re going to see a lot of politicians choose to campaign in fiction. But we have to govern in fact.’”

Geither notes that Romney’s claim has been thoroughly debunked but I thought we’d add to the excellent analysis of how absurd his claim is by showing the employment to population ratio by gender since January 2007. Even before the official start date of the recession that began in December 2007, the employment to population ratio both for men and for women began to slip. By January 2009 the ratio for men had plummeted from 70.3% to 66.2% while the ratio for women had declined from 56.8% to 55.3%.

The bottom for the male ratio occurred by December 2009 when it hit 63.3%. This ratio has crawled back to 64.4%, which is still a far cry from where we would like to see it. The bottom for the female ratio did not occur until January 2012 when it hit 52.9%. It is now only 53.1%. One of the reasons why this ratio continued to fall is the incredibly unwise cuts in state and local government employment. More Federal revenue sharing, which has been advocated by Democrats, could have offset this Herbert Hoover style fiscal policy, but it seems the Republicans and Mr. Romney are advocating even more government spending cuts. Go figure!
Posted by ProGrowthLiberal at 5:32 PM