"In other words, the economy grows with every new worker." -- Allen Greenberg 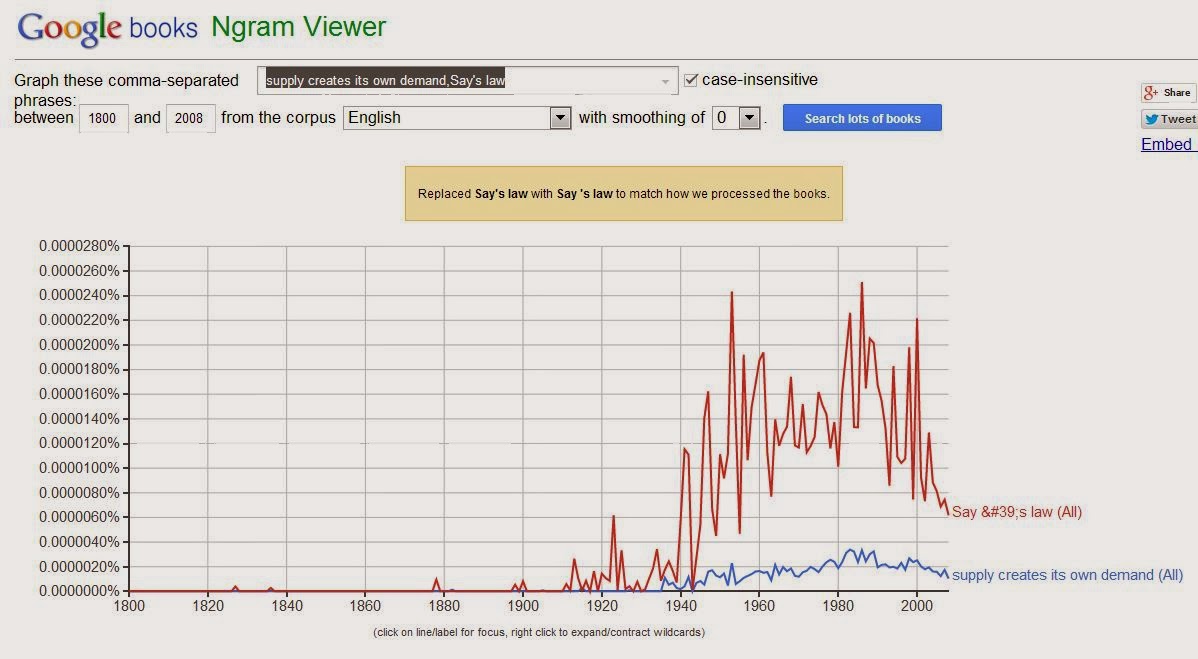 As the above chart shows, "supply creates its own demand" only began to make its mark in the 1930s and "Say's Law" is not much older than that. Thomas Sowell, Robert Clower and Steven Kates have all tried to clear up what Clower has termed a "mare's nest" of confusion about what Say said and meant. "To this day," wrote Clower, "the source of the Keynes phrase ‘supply creates its own demand’ remains a mystery."


Whatever its original source, the phrase ‘supply creates its own demand’ is a far cry from Say’s phrase that ‘products pay for products’.

After much pondering of Keynes’s remarks on Say and classical economics in the General Theory and earlier, I now conjecture that Keynes confused Mill’s interpretation of Say’s ‘theory of markets’ with the problematic presumption that seems to run through the writings of most pre-Keynesian economists, to the effect that there are unspecified forces (invisible fingers or hands?) operating ‘behind the scenes’ to ensure short-run viability of private-ownership economies.

So Say didn't say what Keynes said Say said, see? But note "the problematic presumption that seems to run through the writings of most pre-Keynesian economists." For clarity's sake, let call that problematic presumption Hearsay's Law. Supply creates its own demand. Technology creates more jobs than it destroys. A cheap market will always be full of customers. The economy grows with every new worker.

Marx criticized it as "the theory of compensation as regards the workpeople displaced by machinery." Jevons upheld it as a "principle recognised in many parallel instances." Regardless of whether or not the principle is or was "Say's Law", what did Say have to say about this erstwhile "theory of compensation"? In book 1, chapter 7 of his Treatise on Political Economy, "Of the labour of mankind, of nature, and of machinery respectively," Say wrote:


Whenever a new machine, or a new and more expeditious process is substituted in the place of human labour previously in activity, part of the industrious human agents, whose service is thus ingeniously dispensed with, must needs be thrown out of employ. Whence many objections have been raised against the use of machinery, which has been often obstructed by popular violence, and sometimes by the act of authority itself.

To give any chance of wise conduct in such cases, it is necessary beforehand to acquire a clear notion of the economical effect resulting from the introduction of machinery.

A new machine supplants a portion of human labour, but does not diminish the amount of the product; if it did, it would be absurd to adopt it. When water-carriers are relieved in the supply of a city by any kind of hydraulic engine, the inhabitants are equally well supplied with water. The revenue of the district is at least as great, but it takes a different direction. That of the water-carriers is reduced, while that of the mechanists and capitalists, who furnish the funds, is increased. But, if the superior abundance of the product and the inferior charges of its production, lower its exchangeable value, the revenue of the consumers is benefited; for to them every saving of expenditure is so much gain.

This new direction of revenue, however advantageous to the community at large, as we shall presently see, is always attended with some painful circumstances. For the distress of a capitalist, when his funds are unprofitably engaged or in a state of inactivity, is nothing to that of an industrious population deprived of the means of subsistence.

Inasmuch as machinery produces that evil, it is clearly objectionable. But there are circumstances that commonly accompany its introduction, and wonderfully reduce the mischiefs, while at the same time they give full play to the benefits of the innovation. For,

Besides, it would be vain to attempt to avoid the transient evil, consequential upon the invention of a new machine, by prohibiting its employment. If beneficial, it is or will be introduced somewhere or other; its products will be cheaper than those of labour conducted on the old principle; and sooner or later that cheapness will run away with the consumption and demand. Had the cotton spinners on the old principle, who destroyed the spinning-jennies on their introduction into Normandy, in 1789, succeeded in their object France must have abandoned the cotton manufacture; every body would have bought the foreign article, or used some substitute; and the spinners of Normandy, who, in the end, most of them, found employment in the new establishments, would have been yet worse off for employment.

So much for the immediate effect of the introduction of machinery. The ultimate effect is wholly in its favour.

Indeed if by its means man makes a conquest of nature, and compels the powers of nature and the properties of natural agents to work for his use and advantage, the gain is too obvious to need illustration. There must always be an increase of product, or a diminution in the cost of production. If the sale-price of a product do not fall, the acquisition redounds to the profit of the producer; and that without any loss to the consumer. If it do fall, the consumer is benefited to the whole amount of the fall, without any loss to the producer.

The multiplication of a product commonly reduces its price, that reduction extends its consumption; and so its production, though become more rapid, nevertheless gives employment to more hands than before. It is beyond question, that the manufacture of cotton now occupies more hands in England, France, and Germany, than it did before the introduction of the machinery that has abridged and perfected this branch of manufacture in so remarkable a degree.

Actually, that's not far off Dorning Rasbotham's 1780 Thoughts on the Use of Machines in the Cotton Manufacture. Unlike Squire Rasbotham, however, M. Say didn't indict some ephemeral, unspecified "they" as saying there is "a certain quantity of labour to be performed." Instead, in his 1821 fourth letter to Malthus, Say specifically refutes arguments made by Sismondi about the harmful effects of machinery.

Good for Say! And even better that Say specified his own assumptions for the providential reabsorption of the workers displaced by machinery: "supposing even they immediately find capitals to set them to work at a fresh business..." Got that? Assuming they immediately find new employment... it's all good. Alvin Hansen remarked on this convenient assumption in his 1931 article, "Institutional Frictions and Technological Unemployment":

If we could assume that the displaced workers had somehow found new employment and were again earning wages, then indeed there would be a net gain in total real purchasing power arising out of the additional goods which they produce. But this is to put the cart before the horse, to assume the problem solved without explaining how it happened. And this is, indeed, what Say, Mill and Ricardo did. They argued that increased product means increased purchasing power. They assumed, without explaining how it happened, that the increased production had already occurred. If idle productive factors are set to work to make goods there will be no want of a market. Goods are exchanged against goods. Such was their argument. But the mechanism of labor reabsorption they did not explain.

The Say-Mill-Ricardo analysis assumed without question that idle productive resources would ere long be set to work to produce goods. The only question to which they addressed themselves was whether or not the new production would find a market.

Thus the "problematic presumption" Clower mentioned is indeed connected to Say's Law of Markets but only as an assumption that the problem of unemployment has been already been solved without explaining how it happened. That is, if we suppose that displaced workers "immediately find capitals to set them to work at a fresh business" then the Law of Markets assures us that the new production will find a market. It is not the Law of Markets, however, that immediately sets them to work!