In The Coal Question, William Stanley Jevons argued that "It is wholly a confusion of ideas to suppose that the economical use of fuel is equivalent to a diminished consumption. The very contrary is the truth." As Jevons himself pointed out, the same principle was generally recognized with respect to the effects of labour-saving machinery on employment. Classical political economist John Ramsey McCulloch had stated the latter view emphatically in an 1827 Edinburgh Review essay on the progress of the British cotton industry, "There is, in fact, no idea so groundless and absurd, as that which supposes that an increased facility of production can under any circumstances be injurious to the labourers."

The Jevons Paradox remains a complex, ambiguous and controversial idea. In a nutshell, Jevons argued that an improvement in energy efficiency reduced the cost per unit of output, which in turn led to an increase in quantity demanded and ultimately to a rebound of energy consumption beyond what it would otherwise have been in the absence of the efficiency gain. This essay will return to the rebound debate in a later section. First, though, is the matter of introducing another Jevons paradox – one that has crucial bearing on the scientific status of neoclassical economics. Jevons was not the author of this other paradox, rather it's a paradox about the reception of his work.

In chapter five of his Theory of Political Economy, Jevons presented his theory of work effort that relies on a concept of the disutility of excessive toil.


"A few hours' work per day may be considered agreeable rather than otherwise; but so soon as the overflowing energy of the body is drained off, it becomes irksome to remain at work. As exhaustion approaches, continued effort becomes more and more intolerable."

Following those remarks, Jevons quoted extensively from Richard Jennings, whose statement of "this law of variation" he praised for its clarity. "There can be no question," concluded Jevons, "of the general truth of the above statement," which he then illustrated with a diagram, labeled Figure VIII. "We may imagine the painfulness of labour in proportion to produce to be represented by some such curve as abcd in Fig. VIII.":

In this diagram the height of points above the line ox denotes pleasure, and depth below it pain. At the moment of commencing labour it is usually more irksome than when the mind and body are well bent to the work. Thus, at first, the pain is measured by oa. At b there is neither pain nor pleasure. Between b and c an excess of pleasure is represented as due to the exertion itself. But after c the energy begins to be rapidly exhausted, and the resulting pain is shown by the downward tendency of the line cd.

Jevons went on to describe how the curve Pq in his diagram represented the diminishing utility to the worker of the wages earned as the duration of work increased. He concluded that there will be "some point m such that qm = dm, that is to say, such that the pleasure gained [from wages] is exactly equal to the labour endured."

"Despite its strengths," mused Robert Kerton 100 years after its publication, "recent textbooks ignore Jevons' theory while elevating to supremacy indifference curve analysis." In a footnote he added that "A survey of six recent textbooks on labor economics found no mention of Jevons' approach." 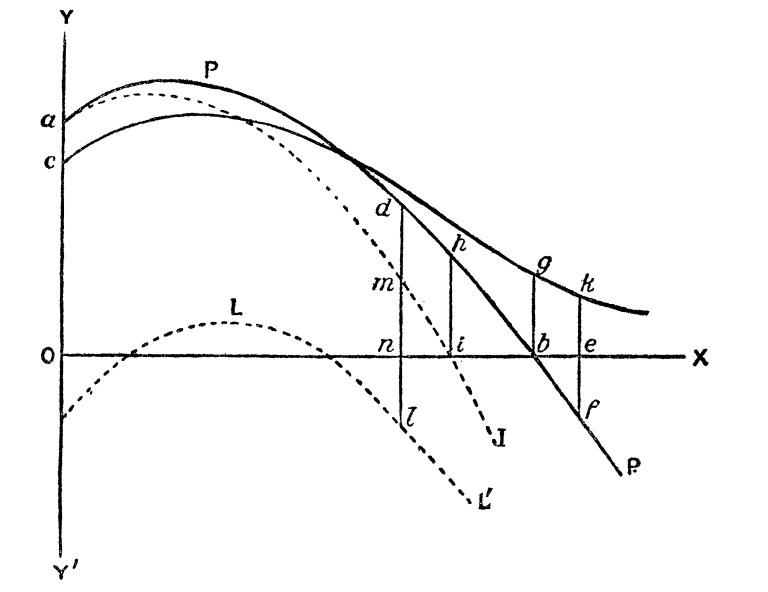 In the intervening years, though, one of Alfred Marshall's star pupils, Sydney J. Chapman, added a few wrinkles – and several curves and letters, to be exact -- to Jevons's diagram. Curve L in Chapman's diagram is clearly analogous to Jevons's curve abcd. While the Jevons diagram described the decision faced by an individual worker, Chapman's sought to capture both the immediate and long period effects of changes in working time on both workers and employers in the economy as a whole. He simplified the model by assuming a single industry and workers who had uniform income preferences and endurance.

Chapman's general conclusion from this analysis was "that progress may be expected to be accompanied by a progressive curtailment of the working day." Along the way, though, he observed that in a competitive market, progressive employers who invested in the future well-being of their workers by voluntarily reducing the hours of work would risk having those workers poached by other employers willing to pay higher wages without having invested in their improved well-being.

As the Sandwichman has pointed out -- repeatedly -- Chapman's analysis of the hours of labour was acknowledged as canonical by such Cambridge and LSE luminaries as Alfred Marshall, E. C. Pigou, J. R. Hicks and Lionel Robbins. Both Pigou and Hicks presented comprehensive summaries of it in The Economics of Welfare and The Theory of Wages, respectively. In fact, Chapman's theory of hours was one of the conceptual pillars of Pigou's analysis of externalities in The Economics of Welfare. So, it seems somewhat strange that Chapman's analysis is virtually forgotten by modern economists.

By "forgotten," I mean economists routinely rely on the assumption that "the given (presumably market-determined) hours of work are optimal" -- usually without even being aware that they making an assumption.

So here is what is so paradoxical: while the formally-labeled Jevons Paradox describes the relentless pursuit of both labour and energy efficiency driving expanded consumption of both through lower unit costs, Jevons's other paradox has to do with the relentless resistance put up against an alternative method of labour efficiency associated with resource conservation. This would not be at all out of place in Thorstein Veblen's analysis in The Engineers and the Price System of the ubiquitous restriction of output imposed by business to obtain higher prices.
Posted by Sandwichman at 11:34 PM