They then go on to tweak the model to produce alternative estimates. They probably had to do this kind of thing to get any attention to their critique of the standard model. But the problem with the model is more fundamental than can be fixed by inputting better assumptions. The model is a colossal tinker-toy of indices, some of which are aggregates of disparate outputs expressed in money units and others of which are formulas that refer to the results of formulas that depend on the original formula's value: circular references.

Deeply embedded within the mare's nest of unacknowledged, unrecognized assumptions is an 86-year old "simplification" introduced to enable the calculation of otherwise indeterminate returns to factors of production. Eighty-six years is a long, long time in simplification shelf-lives but I suppose that if you don't know which direction your destination is, it doesn't matter how long it takes to get there. This missing link is "the economic effects of variations of hours of labour."

If we assume that there is some average length of the working day (week or year) that maximizes output, then variation above or below that optimum will reduce total output. Technological progress and changes in climate are also likely to effect the optimum length. Furthermore, changes in income effect preferences for leisure and consequently labour supply. It doesn't help that this indeterminate labour supply is both the denominator and an input into the numerator of the ratio that is supposed to determine the rate at which the ratio's numerator grows... Not to mention the social cost of labour.

It's a Rube Goldberg contraption with feedback loops. 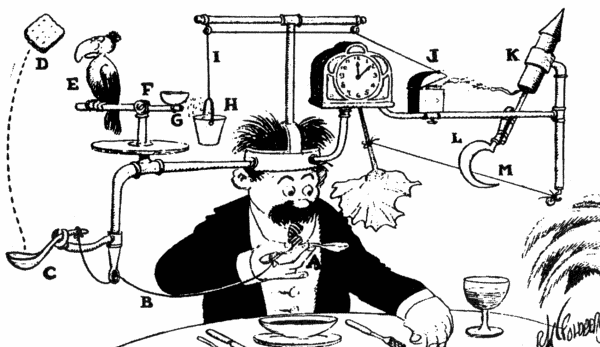 Any system of coupled differential equations, common in economics, will in fact have circular dependences among the quantities in the model.

That's also true of many non economic models, such as predator-prey systems in ecology.

That these "loops" exist is hardly a failing feature of the model. In fact, few real systems lack them.

My point is stated explicitly in paragraph 3. The deeply embedded simplification is to pretend the feedback loops aren't there.