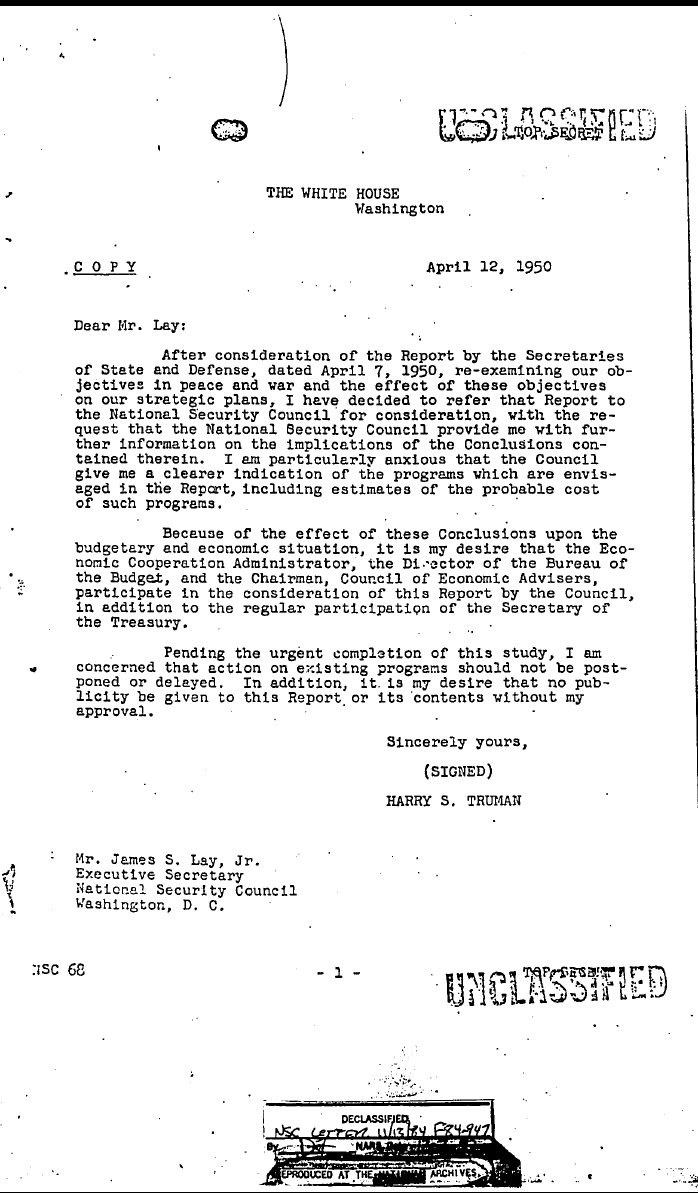 NSC-68 proposed a vast rearmament program to be financed through a "dynamic expansion of the economy" such that "the required resources could be obtained by siphoning off a part of the annual increment in the gross national product." This dynamic expansion "might itself be aided by" the military buildup.

As the above letter from President Truman to National Security Council Executive Secretary James Lay indicates, Truman was concerned about the "probable cost of such programs" and consequently"the effect of these Conclusions upon the budgetary and economic situation." He therefore directed that the Director of the Bureau of the Budget, Frederick J. Lawton, the Chairman of the Council of Economic Advisers, Leon Keyserling and the Economic Cooperation Administrator convene to consider those budgetary and economic implications of the report. According to Keyserling, Truman would not have been aware that it was Keyserling himself who had advised the NSC-68 author, Paul Nitze, regarding the notion of "siphoning off" part of the increment in GNP generated by the arms build-up to pay for the arms build-up.

In the wake of NSC-68 (and, incidentally, the Korean War) U.S defense spending increased from $13 billion in 1950 to $50 billion in 1953. Presidential candidate Eisenhower, in a scheduled September 23rd speech he never gave (it was preempted by Nixon's Checkers Speech), condemned both the inflationary and foreign policy implications of the Truman administration's national security strategy:


The inflation we suffer is not an accident; it is a policy. It is not, as the Administration would have us believe some queer and deadly kind of economic bacteria breathed into the atmosphere by Soviet communism...

Now the weakness of the Democratic Party for 'cheap' or 'soft' money is well known. For the last 20 years, it has practiced this policy faithfully. Of late, it has given it a new twist: it is now called 'controlled inflation.' But this name does not mean what it says.

It really means inflation plus controls.

The way this policy has worked out is easy to describe. With one hand the Administration has been turning up the water pressure at the hydrant, while with the other hand it has been trying to check the water's flow. The Administration's controls over prices are nothing but weak stop-gaps...

There is in certain quarters the view that national prosperity depends on the production of armaments and that any reduction in arms output might bring on another recession. Does this mean, then that the continued failure of our foreign policy is the only way to pay for the failure of our fiscal policy? According to this way of thinking, the success of our foreign policy would mean a depression.

Candidate Ike's proposed alternative to arms spending was... tax reduction. "Tax reduction is a way to boost consumer buying power and to let the people spend their own money instead of the government spending it for them." Soon after Eisenhower's election, President Truman wrote to him:

Following up my telegram of yesterday afternoon, I had a consultation with State, Treasury, Defense and Budget.

There are some really fundamental things pending before the United Nations that must be met in a positive manner. I wish you would suggest somebody, in addition to the person who is to talk to the Budget Director, to discuss these matters authoritatively with the Secretary of State, the Secretary of the Treasury, and the Secretary of Defense....

There is a National Security Council problem pending regarding the allocation of resources. A preliminary report is due November 15th.

All these things are vital policy matters which can only be decided by the President of the United States but I would prefer not to make firm decisions on these matters without your concurrence, although the decisions will have to be made. These things affect the whole American policy with regard to the free world.

If you could designate someone to act authoritatively for you, or come yourself to sit in on these meetings, it would be the proper solution to the problem.

Oh, and, Ike, about that "National Security Council problem pending..." If you liked NSC-68, you'll love NSC-141, the Truman administration's "last will and testament" to its successor. Historian John Lewis Gaddis described NSC-141 as "in one sense an admission of failure… But it was also a staunch reaffirmation of the essential correctness of the Truman administration's strategy."

In other words, the strategy failed so good that much more of it needed to be done: continental defense, civil defense, the development of flexible multi-purpose forces... In short, "these programs for defense of the United States against atomic attack constitute new and distinct requirements and that resources additional to those now programmed should be made available to meet them."

It is in this context that the urgency and stringency of Bureau of the Budget Circular No. A-47 -- issued on New Year's Eve, December 31, 1952 -- becomes comprehensible. Budget Circular A-47 addressed the standards and procedures for developing budget estimates for water resources projects. Item 8, which dealt with "benefits to be included in evaluation" stipulated that "Until standards and procedures for measuring secondary benefits are approved by the Bureau of the Budget, the evaluation shall be based mainly upon primary benefits." Short shrift for the consultant panel's Report on Secondary or Indirect Benefits of Water-Use Projects.


For an indefinite time ahead, the prospect is one of heavy defense outlays, but with a diminishing strain on the construction industry, and a high average level of employment, with fluctuations ranging from moderate recession to full employment and inflation. With this goes very high taxes, both on personal and business incomes. The impact of the present high business taxes has not so far shown itself in reduced private investment -- the defense-stimulated demand and high profits have seen to that -- but it means that any particular increment of investment has to show a very high marginal return before taxes, in order to show a modest rate after taxes.... If the defense stimulus lessens, while taxes cannot be reduced more than a little, taxes may become a substantial handicap to high-level employment. One remedy is deficit-spending, with inflationary potential. In this setting, inflation and high taxes are alternative evils, which may combine. In the present phase of this situation, public works bear an unusually heavy burden of proof.

To use the glib expression from NSC-68, the required resources for further expansion of defense outlays called for by NSC-141 could be obtained by "siphoning off" funds that might otherwise have been spent on civilian public works projects. The economic rationale for A-47 was thus not so much fiscal conservatism as it was about offsetting military-industrial profligacy with austerity elsewhere in the federal budget.

Let's return in closing to that earlier formulation of a "dynamic expansion of the economy" such that "the required resources could be obtained by siphoning off a part of the annual increment in the gross national product." The contention was that the massive increase in military spending "could be accomplished without a decrease in the national standard of living." The incoherence of this claim may be concealed by its obtuseness. Paul Samuelson's explanation from a 1950 article on "Evaluation of Real National Income" may help to clarify:


Production possibilities as such have no normative connotations. We are interested in them for the light they throw on utility-possibilities. This is why economists have wanted to include such wasteful output as war goods in their calculations of national product; presumably they serve as some kind of an index of the useful things that might be produced in better times.

That is to say, the "dynamic" increment in GNP resulting from the military buildup could only serve as an index of the extent to which the standard of living would not have been decreased if it weren't for the wasteful spending on war goods. Yes, and if we had some bacon, we could have bacon and eggs -- if we had some eggs. At the conclusion of his article on national income (in which he also criticizes the Kaldor-Hicks-Scitovsky criterion) Samuelson offers "one last warning": "to define what is feasible involves many arbitrary assumptions, some of them of an ethical nature."

So much for the "Cold War" in the title. What about the "Hot Planet" bit? Recall Samuelson's remark about "an index of useful things that might be produced in better times." There's a catch.
Posted by Sandwichman at 8:14 PM

Something about military Keynesianism.

No, I don't think that is an apt label.

See also War is the Health of the GDP.