Dean Baker is right about growth... (and a three-card monte game doesn't have to be a scam)

It's all in how the game is played.


...growth is not necessarily bad for the environment. And, as a practical matter the only way we will be able to advance environmental goals is by tying them to a growth strategy.

O.K. let's play a game called "[pick a number] myth[s] about [fill in the blank]" "three myths about growth."


Myth: "When people hear the term 'growth' they tend to think of physical objects such as houses, cars, and refrigerators. Growth can mean more of these products."

Reality: "Newer and better treatments for cancer and other diseases are also growth. So is an increase in the number of people going to college or other getting other types of education. Better software is also growth."

Truth: Services don't run on breathair. Services employ workers and require infrastructure. When all the inputs are accounted for -- including labor and infrastructure -- "service and household sectors are not much less energy intensive than are the other sectors of the economy," (Stern, "Economic Growth and Energy" Encyclopedia of Energy, vol 2)


Myth: "growth has been associated with increased use of fossil fuels and other resources."

Reality: "that link has gotten much weaker over the last 15 years."

Truth: The last 15 years? Why stop there? Why not the last 35 years? Or 70 years? Look at David Stern's Figure 4, below. Since 1945 relatively less primary energy has been used per dollar of real GDP. That relative decoupling accelerated after, oh, 1973. 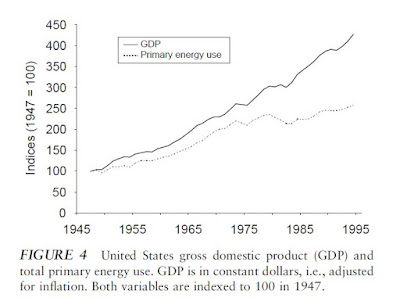 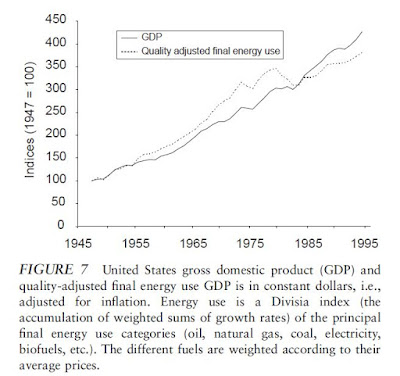 What happened to that "relative decoupling" of GDP from energy use prior to 1973? It appears to have been more than entirely the result of the shift to higher quality fuels. After 1973, there does appear to be some relative decoupling but, as Stern pointed out:


If decoupling is mainly due to the shift to higher quality fuels, then there appear to be limits to that substitution. In particular, exhaustion of low cost oil supplies could mean that economies have to revert to lower quality fuels such as coal.

It's like the warning, "objects in mirror are closer than they appear." In this case, GDP growth and energy use are more closely coupled than they appear. Past results are not a reliable indicator of future outcomes.


Myth: "there are considerable political obstacles to implementing environmental policies in the United States and other countries"

Reality: "there are clearly much bigger political obstacles to putting in place a new economic system"

Truth: Who the fuck knows? Are the relative probabilities of implementing environmental policies or of putting in place a new economic system known? Are they quantifiable? Dean's contention here is where the argument gets interesting. Recall that quote from his op-ed:


...growth is not necessarily bad for the environment. And, as a practical matter the only way we will be able to advance environmental goals is by tying them to a growth strategy.

Dean appears to acknowledge that questioning growth is taboo. Proposals that confront the legitimacy of the growth imperative are systematically excluded from respectable, mainstream conversation. They are dismissed as ill-informed fringe talk by people who "don't understand" that growth isn't necessarily bad for the environment -- that it doesn't necessarily mean more "physical objects such as houses, cars, and refrigerators."


The above clip is from Caroline Baum's Henry Hazlitt Memorial Lecture at the 2010 Austrian Scholars Conference, held at the Mises Institute in Auburn, Alabama. You may wonder why Austrian scholars traveled all the way to Alabama for their conference? Never mind.

Baum's lecture, fetchingly titled "Still nonsense after all these years," dwelt on the Sandwichman's favorite fallacy, an appropriate theme for a Hazlitt memorial in that Hazlitt's Economics in One Lesson contained no fewer than four denunciations of "the false assumption that there is just a fixed amount of work to be done."

Less well-known than his ad nauseum Lesson was Hazlitt's outspoken disdain, in the 1950s, for what he termed "the fetish of national income statistics." Point four in Hazlitt's catalogue of reasons for doubting the trustworthiness of growth rate comparisons was the following:


Professor G. Warren Nutter has pointed out that there is 'a long-run tendency... for the industrial growth rates to slow down, or retard, as the level of production gets higher.' There are several basic explanations of this. One has to do with a trick of percentage figures. Another has to do with a physical satiety point in human needs. If only one family in a country has a bathtub, and the next year 50 families get one, the rate of growth is 5,000 percent. But when everybody has a bathtub net growth stops. This principle applies to houses, automobiles, radios, television sets, and so on.

Did you see what they did there?


we want bigger houses, fancier appliances, more cars. In the fifties it was a car in every driveway and that gave way to the two-car garage and now the three and the four-car garage.

But when everybody has a bathtub net growth stops. This principle applies to houses, automobiles, radios, television sets, and so on.

When people hear the term 'growth' they tend to think of physical objects such as houses, cars, and refrigerators

The rhetorical coupling between economic growth and physical objects is highly malleable. It is Sandwichman's contention that it is precisely this ambiguity that has made growth so rhetorically persuasive. Growth appears to mean just about whatever the speaker chooses it to mean with regard to physical objects.

This sleight-of-hand is the rhetorical equivalent of the three-card monte trick of throwing down the top card. But it needs to be remembered that the card trick alone is not the whole hustle. Of equal (or greater) importance is the dramatic build-up that induces the mark to bet money on the game.

It makes little sense to argue that the three-card monte game could be played honestly if there were no shills and the dealer did not engage in card tricks. Playing honestly is not the object of the game.

It is perhaps an understatement to say that there are huge political obstacles "to putting in place a new economic system" but when the existing system precludes effective environmental policies, then there really is not much choice. The rhetoric of growth discounts policies that could make growth "not necessarily bad for the environment."

The Empire of Complicity -- Max Haiven

The struggle against hopelessness is in some ways very personal and in some ways very common. The idea that the global capitalist system as it is today cannot be changed is almost universal. Indeed, this fatalism — at least at the level of individual motivations — is ironically one of the driving forces behind the system’s perpetuation. The vast majority of those whose labors reproduce capitalism (from CEOs and politicians to lawyers and professors; to journalists and software engineers; to store clerks and strip miners) do not do so out of any particular love of the system or economic sadomasochism. Indeed, it is widely recognized that the present order is tremendously destructive, both to the world at large and to our own lives.

Rather, like most of us, they participate — to a greater or lesser extent — in making capitalism ‘work’ because they believe there is no other option. How many of us take up positions in the architecture of power based on the rationale that our reluctance or refusal to do so would be meaningless? How many of us have been forced to compromise our values because of the economic pressures of the system? How many of us have justified these compromises in the name of inevitability? Of course, most of us work because of economic coercion; only a few of us are ever privileged enough to entertain the opportunity to say ‘no’. But, even so, we can credit the relatively minimal involvement of populations in social movements less to ignorance and apathy and more to a sense of utter futility. If capitalism and its co-optation of all that we value is inevitable, why bother to resist? Why not simply seek to do the best one can within the system?

"The Empire of Complicity -- Max Haiven"

And that's why I admire the breadth of knowledge displayed by the Sandwichman.

And why not share the growth so hat it is more universally productive?

Service industries can be supplied energy by distributed and more carbon neutral sources than can a steel plant. You don't run a blast furnace off solar panels on the roof but you can, and increasingly so, run a modest sized office building stuffed with coders or service reps via co-located electrical generation.

That simply isn't captured in your Figures 4 and 7. Nor of course are the differential impacts on the world between wind, solar and tidal generated energy and a coal fueled power plan even after taking into account that they each rely on a materials and energy intensive (to build) grid structure.

Rural electrification meant something very different in terms of steel and oil in 1930s America than it might in 2020s or 2030s Africa.

What Stern is saying, and I'm endorsing, is not that there aren't any differences between services and "stuff" but that it is not prudent to overestimate their total impact. Step back from sectoral shifts and look at the global total of energy consumption or GHG emissions per worker hour. There has been no decoupling. Consumption and emissions increase slightly faster than hours of employment. This is the rock and the hard place.

The past is not always 100% a prologue to the future. I am just suggesting that one reason there was no decoupling in the past was in fact due to the limits of energy technology. Then.

And it wasn't for nothing that I placed some of the possible future decoupling in the "2020s and 2030s". Perhaps you don't actually have overnight technological revolutions. On the other hand there was a hell of a transition in computing between say 1955 and 1970 and a whole different one between 1970 and 1985. I would not just blindly bet against an equivalent revolution in distributed energy between say 2010 and 2025 that will make as much a mockery of your graph as the prediction by IBM's Watson in 1943 that there would be a world wide market of 5 for computers like Eniac. And we can't say he was wrong exactly, because thirty years later the computers weren't much like Eniac at all.

Politics is about getting people to vote for the same thing but for different reasons. If that requires deliberately deceiving some people as to the likely consequences of their choice, then that's what it requires.

One obstacle between point A and point B is that the press and the academy are trapped in a mutual admiration society that works to celebrate individualism at the core of neoclassical economic-morality while denigrating the institutions big enough to solve all the problems generated by capitalism and econo-morals.

This obstacle is not intractable, however. Mobile communications, the Internet, and ubiquitous cameras have existed for less than a decade. Given ten more years, "network news" will not have anything to do with television and the influence of the NYT will be limited to its readership.

What will a growth theorist do when the press stops calling and academic journals offer delayed "publication" in return for no prestige? I don't know. In the meantime, advocating for a basic income or other post-growth friendly policies, without explicitly attacking growth per se, is probably a good strategy.

"The past is not always 100% a prologue to the future. I am just suggesting that one reason there was no decoupling in the past was in fact due to the limits of energy technology."