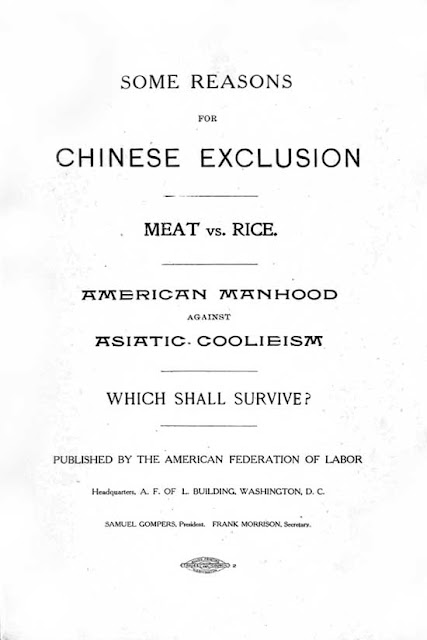 Mark Thoma cites a Paul Krugman column on Empowering the Ugliness in which the latter concludes that ."..this ugliness has been empowered by the very establishments that now act so horrified..." Professor Krugman was referring to a contemporary ugliness that is -- to use a discrete circumlocution -- not unprecedented in American political culture, as the above pamphlet cover from the American Federation of Labor illustrates.

Of course, A.F. of L. President Samuel Gompers's advocacy of Chinese Exclusion -- like Donald Trump's proposal for Muslim  (and Mexican) Exclusion -- was "not inspired by a scintilla of prejudice of any kind, but with the best interests of our country uppermost in our mind..." Not a scintilla!

Sam Gompers also said, "So long as there is one man who seeks employment and cannot find it, the hours of work are too long." I mention this because both anxiety about immigration and advocacy of shorter working time as a remedy for unemployment have been ridiculed by economists -- including Krugman -- as products of a mistaken "lump-of-labor" belief in a fixed amount of work.

Thanks in part to decades of condescension by economists (including Paul Krugman), the shorter working time remedy is now conveniently "off the agenda." According to Krugman, he doesn’t "get too worked up about this kind of misunderstanding anymore; it doesn’t have political power behind it, the way right-wing fallacies do."


But wait--what entitles me to assume that consumer demand will rise enough to absorb all the additional production? One good answer is: Why not? If production were to double, and all that production were to be sold, then total income would double too; so why wouldn't consumption double? That is, why should there be a shortfall in consumption merely because the economy produces more?

Here again, however, there is a deeper answer. It is possible for economies to suffer from an overall inadequacy of demand -- recessions do happen. However, such slumps are essentially monetary -- they come about because people try in the aggregate to hold more cash than there actually is in circulation. (That insight is the essence of Keynesian economics.) And they can usually be cured by issuing more money -- full stop, end of story. An overall excess of production capacity (compared to what?) has nothing at all to do with it.

Except that's not the end of the story. That insight which Krugman called "the essence of Keynesian economics"? There was more than one application of the principle, according to the man himself:


The full employment policy by means of investment is only one particular application of an intellectual theorem. You can produce the result just as well by consuming more or working less. Personally I regard the investment policy as first aid. In U.S. it almost certainly will not do the trick. Less work is the ultimate solution.

In other words, "So long as there is one man who seeks employment and cannot find it, the hours of work are too long." So, what'll be -- meat or rice?
Posted by Sandwichman at 5:45 PM

Krugman really did say that? "Less work is the ultimate solution". Wow! I assume he means "less work" in the monetary economy? Because as soon as one begins to exit that particular scene the realisation dawns that there is no end to work. I see Krugman's stance as very encouraging, as long as it is backed up by strategies to empower people in other sustainable ways.

No Keynes said it. The reference was to wage labour, not to generic work.

Apologies. A silly mistake, from quickly scanning the article. So, Krugman actually takes the opposite stance from Keynes. In Australia it's clear (at least the last time I checked) that there has been a drop in the number of (paid) hours worked overall, rather than a drop in jobs.