The Electoral College, White Supremacy and Full Employment as "Reign of Terror"

Published in September 1947, Whither Solid South? A Study in Politics and Race Relations, by Charles Wallace Collins, "became both manifesto and blueprint" for the 1948 "Dixiecrat" campaign of Strom Thurmond and -- over the longer term -- the strategy whereby Southern white supremacists engineered a balance of power "lock" on the electoral college and thus on the Presidency. Matthew M. Hoffman examined the political consequences of that strategy in "The Illegitimate President: Minority Vote Dilution and the Electoral College," published 20 years ago in the Yale Law Journal. Joseph Lowndes discussed the broader influence of Collins's book on the emergence of a "New Right" in From the New Deal to the New Right: Race and the Southern Origins of Modern Conservatism. Collin's strategy can be summed up in a few paragraphs from chapter 17 "The South Need Not Surrender":

Neither the Negroes nor any of the groups which support them can alone, or in conjunction with each other, give assurance of control of a single vote in the Electoral College. … In comparison with them, the South is a political giant. … The South, being a geographical minority with a one-party system, would know at all times its minimum strength and from that work toward its maximum.

The aggregate of votes of the southern region is 170 in the Electoral College, 30 in the Senate and 140 in the House -- nearly one-third in each. On questions which peculiarly affect the southern region, on the Negro equality question and on radical labor questions, these States may be expected to stand with the South in the Congress.

I have emphasized two phrases in the above excerpt. Collins candidly described the "Solid South" concept as a one-party system. A segregationist South was to dominate national politics by eschewing popular choice. "States rights" were to prevail over the rights of citizens of those states. Collins's notion of a white-supremacist lock on the electoral college did not rely on winner-take-all popular elections. In a 1944 pamphlet, he upheld the constitutional propriety for an elector "to vote in the Electoral College for a person whom he thinks will protect the interests of his state rather than for a person nominated at a national party convention whom he thinks would be hostile to them."

Collins's treatment of full-employment policy is, to say the least, extraordinary. After a brief, three-page introduction, in which he mentioned that "[t]he term 'full employment' occurs in the Russian Constitution" and that Sidney Hillman, "father of the Full Employment Bill," was "Russian-born and bred," Collins then launched into an eight-page long disquisition on the horrors of the Russian Revolution, the liquidation of the Kulaks, the Stalinist purges and Siberian slave labor camps. Having thus established the inevitable meaning of the system of "state capitalism" that prevailed in the Soviet Union, Collins then parsed assorted phrases from Sir William Beveridge's Full Employment in a Free Society by way of demonstrating that Beveridge's conception of full employment -- and by extension, Hillman's and the New Deal's -- was essentially the same as Stalin's, albeit possibly more gradual and less violent.

Collins's extensive focus on "radical labor questions" might give pause to wonder whether white supremacy and segregation were actually the ends he sought or only the means to a political reversal of labor advances under the New Deal. In fact, those labor questions had occupied politically-active industrialists in the South since even before the election of Franklin Roosevelt in 1932.

In a 1930 address, "A labor policy for the South", John E. Edgerton, president of the National Association of Manufacturers, extolled the South's low wage, long hours regime as reflective of the region's "Anglo-Saxon" homogeneity, maintaining that "wage-earners, like the employers of this section, are almost wholly of one blood, one God, and one language. The South is the most homogenious [sic] section of America, and its people of all classes understand one another better perhaps than those of any other section." 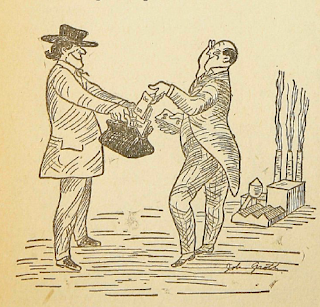 When wage and hour codes were established by the New Deal NRA, Southern employers argued for differential wages rates both for the South generally and between white and African-American workers. Edgerton, now in his role of president of the Southern States Industrial Council, justified a wage differential for the South on the grounds that it would "preserve labor's racial purity, that is foreign labor will not be attracted to the Southland." Southern industrialists also argued for a racial wage differential, ostensibly on "humanitarian" grounds by "white people, usually employers, who claimed great friendship for the Negroes and insisted that they wanted a differential in order for the Negro to retain his place in Southern industry." As Arthur Raper wrote in 1934:


The significant thing involved here is that these employers and their agents seemed to realize that if they could secure a racial wage differential they could the better maintain the chronically low wages in the South. In this they were most likely correct, for there has been a "nigger" in the South's "woodpile" of low wages.

The Southern States Industrial Council, which at first was somewhat conciliatory to the New Deal, became increasingly hostile over the subsequent decade -- to the extent that SSIC vice-chairman, John U. Barr initiated the Byrd-for-President Committee in 1944 in an effort to block the nomination of FDR for a fourth term. That effort was abortive but Barr -- and the contact lists developed during the campaign -- became key components in the 1948 "Dixiecrat" campaign, which adopted Collins's Whither Solid South as its intellectual guide. Mississippi Senator James "Big Jim" Eastland read the book and immediately shared it with the newly elected governor of that state, Fielding Wright, who was subsequently to become the vice-presidential candidate on the States' Rights Democratic Party ticket. Eastland conferred with Collins and Wright and sent 300 copies of the book to key contacts, including Strom Thurmond and Barr.

John U. Barr -- who had spearheaded the 1944 Byrd-for-President campaign and played a key role in the 1948 Dixiecrat campaign -- was also a director of the National Association of Manufacturers and a founder, along with Edgerton of the Southern States Industrial Council. According to Stetson Kennedy in Southern Exposure, the SSIC, which had long been suspected of sponsoring the Christian-American Association's right-to-work lobbying, were compelled "to come out into the open with their drive to abolish union security" when the CAA was publicly discredited.  In 1946, Barr chaired the Louisiana Citizens' Committee, which promoted anti-union "right-to-work" legislation. In the 1950s, Barr went on to lead the segregationist Federation for Constitutional Government and the Citizens' Councils of America (also known as the White Citizens' Councils). Commenting on a 1955 meeting in Memphis of segregationist groups attended by Barr, Pete Daniel observed in Lost Revolutions: The South in the 1950s:


The merging of segregationists, right-to-work partisans, and businesspeople at the meeting suggested the intricate racial tactics used to divide black and white workers, to encourage right-to-work legislation, and to discourage unions. Citizens’ Council intervention had stymied several unionization drives. Some white workers at the Firestone, Ford, and International Harvester plants in Memphis belonged to the Citizens’ Council, as did steelworkers in Birmingham. Management cleverly fused the notions of unions and integration to create a fantasy of a communist threat that would unite white workers.

In the final analysis, the objectives of full employment and collective bargaining have been the casualties in the fight to preserve "states' rights" and "white supremacy." One has to ask if that wasn't the hidden-in-plain-sight agenda of business elites all along.

Posted by Sandwichman at 8:58 PM

Sandy best piece of yours in some time

"Collins's extensive focus on "radical labor questions" might give pause to wonder whether white supremacy and segregation were actually the ends he sought or only the means to a political reversal of labor advances under the New Deal."

The class struggle Ever wrapped in race

The great white light among the bosky domestic subaltern nations

Or so is the fable of our times

Thank you, Owen. I was despairing that no one was going to read it. There seems to be an inverse relationship between how much thought and effort I put into a post and the amount of traffic it generates.

I'm hoping you will also like my new post, "Full Employment and the Myth of the General Strike" that seeks to resurrect, if not Georges Sorel, himself, some of the seering insights from his thought.