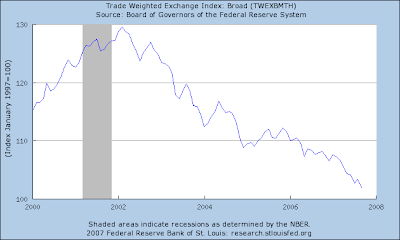 Our graph shows how fall the dollar has declined over the past few years and well as the dollar appreciation during 2000 and 2001. The first six paragraphs of a recent op-ed from the New York Times does a reasonable job of describing how easy monetary policy leads to lower interest rates, dollar devaluation, and rising net exports. Dean Baker, however, objects to paragraph seven of the eight page op-ed:

Dollar weakness is home-grown. It is rooted in the borrow-and-spend behavior of the United States government and American consumers and in a corollary lack of domestic savings that necessitates foreign borrowing.

Huh? And I was always taught that fiscal stimulus led to higher interest rates. Now textbook description continues with the suggestion that this decline in national savings may indeed led to net export crowding out (foreign borrowing) but the channel for this effect is a stronger dollar – not a weaker one. I love to bash the Bush Administration for fiscal irresponsibility as much as the next guy – but this attempt to blame the Federal deficits for the dollar decline falls short.
Posted by ProGrowthLiberal at 8:45 AM

Not sure where Baker's confusion comes in. If US consumption and government spending is greater than production, which seems to be the case, then you'll have dollars chasing imported goods to make up the difference. Flooding dollars into the exchange market will cause the dollar to decline.