Sucking Up the World Savings Glut 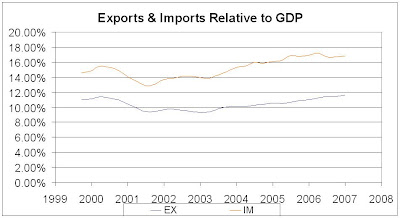 If the world has been through a savings glut, Michael raises a very good question as to why wages are not being bid up. Some of us, however, have wondered whether we have gone through a global investment deficiency. To some Americans, the notion of a savings glut sounds foreign as our graphs show that the nation’s “gross savings” as a share of GDP fell from around 14 percent to just over 10 percent – in part because of the Bush spend but do not tax policies. Net national savings, which is gross savings minus depreciation, has barely been above zero. We are thus running a repeat of what happened in the 1980’s when Ronald Reagan’s “save and invest” translated into less of each.
But notice something - the fall in U.S. savings did not translate into a one-for-one decline in investment. At first, U.S. exports declined but have recently returned to the same level of GDP as we saw in 2000. Also, imports as a share of GDP have increased so our current account deficit is doing as much as one nation seems to be able to suck up whatever world savings glut it can. But maybe this is the whole idea behind GOP fiscal policy – less saving means capital-shallowing rather than capital-deepening. Which of course as Michael notes – translates into less long-term wage growth.
Posted by ProGrowthLiberal at 7:03 PM

perhaps not an 'investment deficiency' so much as a prolonged working off of overaccumulated production capital and simultaneous building of financial accumulation -- domestic job creation under such circumstance would not be strong and, when combined with pressure from a more easily accessed global labor surplus would, imo, prevent a generalized bidding up of wages.