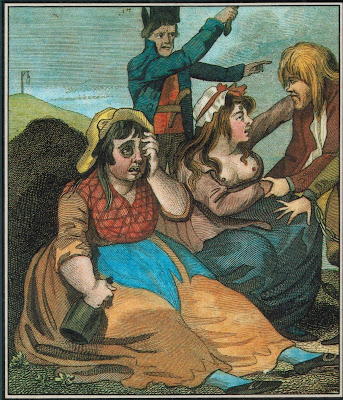 Today is Australia Day, though the vast majority of Australian aboriginal people would understandably prefer to call it ‘invasion day’. At least in these times Aboriginal grievances in relation to this awkward day get some mainstream media airing. The plight of my white female ancestors still doesn’t. They were the unwilling and much-abused first immigrants to this country.

“The First Fleet consisted of 1,480 people more than half of whom were convicts. There were 586 male and 192 female convicts as well as a large number of seamen, marines, servants and officials. Only a tiny fraction of these were accompanied by their wives and children.”

“…Within the penal colony, women were assigned only one main function – they were there primarily as objects of sexual gratification. The main difficulty, as far as the British authorities were concerned, was to find a sufficient number of women convicts, and to do this they had to impose preponderantly harsher sentences on women.….

The sexual abuse of female convicts began on the ships. Although after 1811 the women traveled on separate ships from the male convicts, they had the crews to contend with. WHR Brown told the Select Committee on the State of Gaols in 1819 that:

“These women informed me, as well as others of their shipmates, that they were subject to every insult from the master of the ship and sailors; that the master stript several and publickly whipped them; and that one young woman, from ill treatment, threw herself into the sea and perished, that the master beat one of the women that lived with me with a rope with his own hands till she was much bruised in her arms, breasts, and other parts of her body. I am certain, from her general good conduct, she could not have merited any cruelty from him.” [1]

My great, great grandmother was Mary O’Neill born in Maitland in New South Wales in 1843. On the genealogical history now finally revealed it is possible that she was related to another Mary O’Neill. A woman that is referred to in the journal of William Elyard, a surgeon superintendent on the "John Bull" which sailed from Cork on 25 July 1821 via St. Jago, to arrive in Sydney on 18 December 1821. Mary is described as one of “an aggressive pair” of women. Mary O'Neill and another woman, Ellen Nolan, were “identified as assaulting one of the men while cleaning” on this “troublesome voyage” of the convict ship taking the women to the Paramatta Factory. [2] The latter “operated as a prison, a maternity home, a marriage bureau, an employment exchange and a hostel or refuge for women in transit between jobs. All its inmates, however, were strictly speaking prisoners...’ What a comment on the common status of all females of the lower classes!” [3]

So cheers to our Mary O’Neills and our damned whores. May we continue to break the handle of many a hammer in our go-slow rebellions against enslavement and worse.

“…..the damned whores the moment that the[y] got below fel a fighting amongst one another and Capt Meredith order the Sergt. Not to part them but to let them fight it out…..”
- Lt Ralph Clark of the First Fleet, ‘The Journals and Letters of Lt Ralph Clark 1787-1792.

[3] ‘The most outrageous conduct’ Convict rebellions in colonial Australia
By Tom O'LINCOLN
http://www.anu.edu.au/polsci/marx/interventions/convicts.htm

Posted by Myrtle Blackwood at 8:26 PM

Theft and slavery: good old British colonialism. .... seems like a common start to a few nations.

An excerpt from the Australian Broadcasting Commission's morning news program ... with regard to the naming of Mick Dodson as Australian of the year....

"HAYDEN COOPER: Is the Government moving quickly enough to give formal recognition to Indigenous Australians in the constitution?

MICK DODSON: Well, I'm not sure where they're at with that but I'd urge them to get on with it. I think it's an important thing we have to do in the reconciliation process. And it's also, it's in line with what I think we should build an understanding about, the importance of rights and human dignity in this country.

HAYDEN COOPER: There is a move to change the date of Australia Day. What do you think about that?

We need to have a conversation about that and try and fix that. And I know we can because we're better than that. Australians can do that.

HAYDEN COOPER: And do you consider it a day of celebration or a day of mourning?

MICK DODSON: I think it's a day of reflection."

We could be turning a new leaf here - if we survive all the ecological plunder.

You can turn a new leaf if you want.

I gather, 'Anonymous2' that you're referring to yet another figleaf?

Brenda,
Have you seen the movie, The Rabbit Fence? It came out just a few years ago. I enjoyed the movie if not the content it portrayed. I'm curious to know how it played to Australians and whether it is regarded as historically accurate. It doesn't go that far back in history. Hard to tell which natives were treated more harshly in their own land, the native Americans or Australians?

Jack,
Sometimes I think that all these fences in Australia - the Aboriginal missions, the convict chains, the rabbit-proof fences - at least protect many Ozzies from an excess of delusions of freedom.

I guess, just like with the rabbits discovered, it's usually possible to find a way through them.

I did watch and enjoy that movie...with an aboriginal friend of mine in Hobart.

feisty, yes. Sorry about the misspelling.

I've broken a taboo by seemingly referring to the founding mothers of Australia as 'whores'.

In actual fact the description of these women is sourced from an officer of the First Fleet who is in charge of Britain's government-sanctioned enslavement and abuse. Lt Clarke was a member of his country's 'polite society' but he could very easily be described as aggessive, militant, hostile, belligerant and unethical.

Massacres are passing us by and public amnesia is carefully planned.