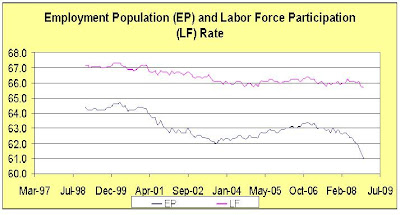 Nonfarm payroll employment declined sharply in December, and the unemployment rate rose from 6.8 to 7.2 percent, the Bureau of Labor Statistics of the U.S. Department of Labor reported today. Payroll employment fell by 524,000 over the month and by 1.9 million over the last 4 months of 2008. In December, job losses were large and widespread across most major industry sectors.

But notice that the household survey reported employment losses of 806,000 with this:

Our graph shows the employment-population ratio and labor force participation over the past 10 years. As the latter has declined, the rise in the unemployment rate understates to the true decline in the ratio of employment to population.

This news should tell Congress that we need a big stimulus package ASAP and one that has a lot of bang for the buck. On this score, I think the Senate Democrats have it right:

President-elect Barack Obama's proposed tax cuts ran into opposition Thursday from senators in his own party who said they wouldn't do much to stimulate the economy or create jobs … Sen John Kerry, D-Mass., said, "I'd rather spend the money on the infrastructure, on direct investment, on energy conversion, on other kinds of things that much more directly, much more rapidly and much more certainly create a real job."

Update: Bruce Bartlett provides a very interesting discussion on the effectiveness of various fiscal stimulus proposals.
Posted by ProGrowthLiberal at 10:34 AM

Reuters has an article arguing that, if unemployment were measured the same way it was in the 1930s, the current rate would be over 16%. Most unpleasant, if accurate.

A RADICAL PLAN TO REDUCE UNEMPLOYMENT

Just maybe it is time to lower the workweek from 40 hours to say 36. We've done this before when we enacted the law and it has worked all these years.

By implementing Medicare for All employers could then give 10% raises too compensate for the raise in pay ...

By reducing the work week 10% that would give us at least 6-8% more jobs right away! This would help part timers that want more work too.

I've been posting this around. I believe I got the idea of a shorter work week from you about two or three months ago ... I mulled it over and the timing of the idea never seemed better.

Until we expand Medicare to cover all the people in the USA whether they have a job or not, the employers will NOT hire more part time people and the people will not be able to work part time because in so doing they lose their health insurance.

NOW TO THE ARTICLE BY BARTLETT:

Bartlett says to do nothing. No matter what the government does, according to Bartlett, it will not help. He may be right but I think not. Even if government really did fly helicopters over the nation throwing money into the blades we would see improvement. Bartlett wants to ignore the real problem which is deflation. It mat not even matter how the money is blown into the economy but that it must be blown in at the bottom as opposed to the top. Baling out banks us not going to do any good.

The talking heads and the trained seals in the bought and paid for neoconomist profession want to make this a lending problem. It isn't. The problem is that nobody wants to borrow. That is what happens in deflation. Nobody wants to borrow a dollar today and spend it because they know that the dollar will be worth more labor and more goods next year. You can't build a shoe factory because in a year there will be no market for shoes. And if there were a market for shoes the Chinese would fill it. Better to stuff the money in a mattress. Better to declare bankruptcy.

Until we expand Medicare to cover all the people in the USA whether they have a job or not, the employers will NOT hire more part time people and the people will not be able to work part time because in so doing they lose their health insurance.

I believe that's what i said : Medicare for All ...

mmckinl said: I believe that's what i said : Medicare for All ...

Yup. That's what you said.

Regardless of what you are or aren't "acutely aware of", Trucker, I've just finished reviewing and commenting on 63 pages detailing the employment-creation record of work-time reduction for Robert LaJeunesse's forthcoming book titled Work Time Regulation as Sustainable Full Employment Strategy. I deal with evidence, not "acute awareness" and I get rather impatient with declarations based on certainties founded on unexamined impressions.

Sandwhichman said: "deal with evidence, not "acute awareness" and I get rather impatient with declarations based on certainties founded on unexamined impressions."

My answer is "show me some game". I repeat my point that I see no way that cutting the workweek will be possible without taking health care out of the hands of the employers (and the unions). And I also see no way that cutting the work week by 5 hours will create any significant number of new jobs. I am certainly willing to be shown otherwise, but at present I see no "evidence" for it.

First, you keep repeating the health care argument as if it's some kind of rejoinder. It's not. I have no disagreement with you on that.

Second, I can cite the evidence but you're the one who's going to have to read it. I'm not going to transcribe whole articles and post them in the comments to "show you some game".

The short and skinny is that "most studies conclude that working time reductions have positive employment effects of 25-70 percent of the arithmetically possible effect," (Bosch) which is simply current total weekly hours times the percent decrease in hours per worker divided by the new weekly hour standard. For example, say you have a work force of 1000 and a standard week of 40 hours. A 20 percent reduction of the workweek suggests a hypothetical possible employment effect of (40,000 x.2)/32 = 250 jobs, studies find actual job creation of between 62 (250 x .25) and 175 (250 x .7) jobs.

This is called "game":

I do not think you would lie about it. So I need not go looking for the references.

The health insurance burden on wages for the employee (a truck driver) is 17% (family policy) plus FICA, FUTA, and retirement. All together it is forgivingly 30% burden on wages.

So if they are profit maximizing then why don't they do it?????? It must be that the numbers they gave you are wrong or my arithmetic is wrong. But then there is the real world. The employees are being paid for 40 hours and working 60 - 70 because they are afraid of losing their job and their health care. Many are actually paid so low a real wage that they must work the extra hours or not make ends meet (the typical long haul trucker actually works 70 hrs. per week). And this is the reality in the United States. The unions are no help at all. The big 3 will not be able to own up to their obligations to the UAW and never intended to do so. The government will have to bail out their retirement and health care package just like all the other union packages they have had to bail out.

But if a person has health benefits with or without an employer then he will not work 20 - 30 hours a week for free. Many current employees will become much more entrepreneurial. The cost of an individual insurance policy is currently prohibitive. That is the reality and it is why the employers will fight forever to keep the US health care system exactly as it is and why they will not ever reduce hours.

This, in aggregate is very funny. No-one factors into their numbers that the age of oil is over, that world warming is unstoppable, that the most powerful country in the world is fomenting constant wars at the same time, actions that will, do, are, affecting all those numbers, but no-one on this wonderful blog seems to mention these simple facts. It is still quite funny maybe because? Read "Global War on Liberty" by Jean-Claude Paye. The numbers with out the humans in context can be a shell game. The resulrs perhaps unfolding now.

love to see this discussion! It’s great to see you all working through the issues and also, it’s great to see recommendations for testing. In the end, it’s what your actual users do and prefer that should be your biggest driver in making these decisions.