"Picture a square divided into four boxes, denoting motives that are economic or noneconomic and responses that are rational or irrational." 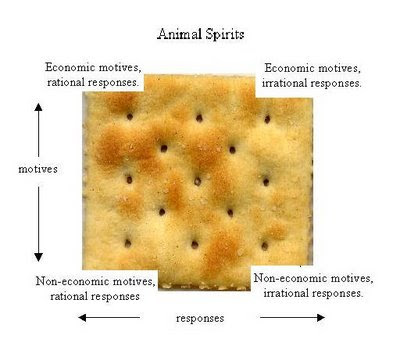 George Akerlof and Robert Schiller are doing narrative policy analysis in their book, Animal Spirits. The 'square divided into four boxes' is also known as a semiotic square and is related to an Aristotelian square of opposition.

If they were writing a dissertation...

If they were graduate students writing a dissertation, one of the requirements would be a literature review situating their own work within the established tradition of the methodology they propose to use. There is scant precedent for narrative policy analysis in the contemporary economic literature. So their literature review would have to be interdisciplinary. Authors such as Emery Roe, Hayden White, Paul Ricouer, Roland Barthes, A. J. Greimas and Kenneth Burke would be appropriate references. They might also detour into historical tidbits involving Goethe's Faust and Giambattista Vico's New Science.

The disadvantage of a literature review is that it may appear to many readers as a digression that delays chomping into the meat of the authors' analysis. The benefit is that, presumably, the authors get and demonstrate a more solid grounding in the analytical techniques they are using.

Akerlof and Schiller correctly point out that standard macroeconomics focuses on only one corner of the economic box. They claim that goal of their book is to fill in the other three boxes. The way they attempt to do this, though, is both simplistic -- 'it's the animal spirits, stupid!' -- and overly complex and convoluted: animal spirits is confidence, fairness, bad faith, money illusion and stories. This is not adding apples and oranges. It's adding coconuts, pineapples, broccoli sprouts, condensed milk and hockey pucks.

What Akerlof and Schiller are trying to do here -- propose a counter-narrative to the traditional rational actor model in economics -- is laudable and timely. However, it is also awkwardly executed. The rule is a counter narrative must be at least as parsimonious as the dominant story it seeks to displace (Occam's razor). Akerlof & Schiller's "animal spirits" is a loose and baggy monster made even looser and baggier by the catch-all category of "stories". It's also a doubtful stretch to try to pin credit for their concoction on Keynes. Sure, he referred to animal spirits somewhere but he also talked about green cheese (in reference to money illusion). So what makes money illusion an 'animal spirit' rather than a 'green cheese'? Instead of applying Occam's razor to their animal spirits, the authors have tied themselves up in a Gordian knot.

Previously I have proposed an appropriately parsimonious alternative to the rational actor model. I call it Persona parsimoniae. Instead of rational calculation, Pp's behaviors are guided by habit and custom. Pp has two distinct kinds of needs, absolute or relative, material or symbolic, subsistence or status, necessary or superfluous. And instead of maximizing individual utility through market transactions, physical and social limits to production necessitate non-market social co-ordination of consumption to avoid excessive waste and deprivation. See how simple that is? Three elements, not five, each of them keyed to a characteristic of the dominant model.

Getting back to Akerlof and Schiller's square divided into four boxes, there is a way to label the elements more substantively. They opt for 'noneconomic motives' and 'irrational responses' as the alternatives to 'economic motives' and 'rational responses'. Their alternatives are too vague as a consequence of an over-reach by the standard set. My alternative suggestions would be positional vs. material motives and habitual vs. calculated responses.

There is, in my view, a third element that needs to be incorporated into the semiotic square analysis: outcomes. Makes sense? 1. motives; 2. responses; 3. outcomes. The semiotic square thus becomes a semiotic cube with eight nodes instead of four but potentially six faces instead of only one. Akerlof and Schiller's more limited square is convenient for arguing that there really is only one alternative to the prevailing conventional wisdom of the last 30 or 40 years. They advocate exchanging one set of blinkers for another that perhaps enables a bit more peripheral vision but still blocks out depth perception. I would draw a picture of the semiotic cube but I have a headache. Maybe some other time.

Posted by Sandwichman at 6:15 PM

Perhaps circular analysis, illustrated with a Ritz Cracker, may be more appropriate. Aperlof and Schiller's book has been getting mixed reviews. But "Animal Spirits" is better than no spirits at all. Schiller has been on the mark for many years with his analyses of housing. But too few paid attention.

"Animal Crackers" with the Marx Brothers may have been in the back of my mind in reading this post. (Did Sandwichman also have this in mind with his singular heading?) That movie came out in 1930, shortly after the Crash of '29. Perhaps America needs a zany comedy - "Animal Spirits" - for bailout relief. Whom might we cast for the role of Captain Spaulding? Alan Greenspan?

Sorry to 'ask' on this post, but I didn't see another location for asking questions. I also know that you blog on this topic - reduction in work hours to increase employment. In the context I was reading this would imply fewer unemployed people, and thus people would be 'happier' on average (or at least report higher subjective well-being).

Thanks for your time if you do have particular references. Not to worry if you don't.