I promised media I would post a flow diagram so here is it, ugly (and provisional) as it may be. 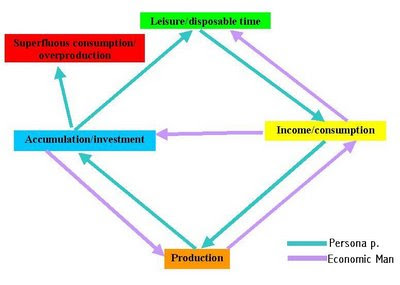 The blue green arrows running clockwise show the direction of influence for the Persona parsimoniae counter-narrative(Pp). From the top, it begins at leisure/disposable time, an increase in which results in an increase in Income/consumption, Production and, finally, Accumulation/investment. Because there is an inherent limit to accumulation, the excess not absorbed into further increases in leisure becomes superfluous consumption and overproduction. There could also be an arrow added from the superfluous box to indicate that today's excess could become tomorrow's standard.*

Conversely, the purple arrows running counter-clockwise indicate the flow for the traditional Economic Man model(EM). These start (hypothetically) at Investment/accumulation (the order of priority reversed) and proceed through Production, Consumption/income and back to Accumulation. In this direction of flow, leisure or disposable time is conceived of as a subtraction from the flow.

*As media suggested, such a chart may be thought of as representing a two-way flow, with elements of either Pp or EM coming into play depending on the circumstances. That two-way flow could obviate the need for an arrow leading back into consumption (or production) from the superfluous consumption node.

Posted by Sandwichman at 3:42 PM

Is this an economist variation on Abbott & Costello's "Who's on first?"

If it is then "Id gratification" is the answer for left field.