A Society That Nobody Wants - edited version number 4 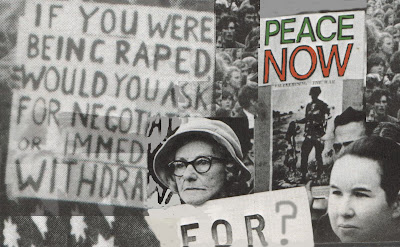 To the right is an image of protesters at the Vietnam moratorium march held in Melbourne on 8th May 1970. This event - the biggest the city had ever seen - was organised by Dr Jim Cairns [1] and held only a few days after 4 students were killed and 9 wounded by US National Guardsmen at Kent State University in America.[2]

The Australian establishment was horrified, "predicting blood in the streets and the Minister for Labour and National Service said "it was an invitation to anarchy". Later he called the supporters of the Moratorium "political pack-raping bikies" while the Prime Minister of the day said they were storm troopers." [3]

A few years prior to this event the US State Department had opposed Dr Cairns' application for an entry visa to enable him to engage in a speaking tour against the continued US and Australian military involvement in Vietnam. However, the State Department capitulated when they were advised by Australia's Foreign Minister that such a refusal would be considered "against the interest of Australia if a member of the Australian Parliament was rejected entry into the US." [4]

I was 15 years old then and I didn't know why boys close to my age were being conscripted to fight in this Asian nation. Miseducation was (and remains) compulsory.

Jim Cairns' book entitled 'Silence Kills' has a description of the Vietnam War. On the first page of his book it says:

Vietnam is one-twenty-eight the size of the United States. Its total population is one-sixth that of America. The average Vietnamese lives for a year on less than the average American consumes in a week. Vietnam is a peasant country with little science and little industrial power. America, an industrial giant, is able to send men to the moon. Vietnam has no air force or navy. American aircraft bomb and strafe South Vietnam without fear of attack. Her powerful navy shells hamlets, villages and towns and sends out fighters and bombers while riding safely miles out to sea. The United States is a vast sanctuary where tens of thousands of men in industry turn out bombs, napalm, gases, aircraft, guns, mortars and all the weapons of war; and to this sanctuary America has added the airfields of Thailand and benefits from aid from a dozen 'free world' nations all of whom are safe from attack. Vietnam, in the south, has been bombed, shelled and burnt almost back to the stone age.

Wars and mainstream thought are wrong. Dead wrong. Many years and many books later the questions on the Vietnam War still keep coming.

People are uneasy about and ashamed of the world that they have given their children to grow up in. My parents were resigned about their own convenient adjustments, but they were, by no means willing to see their children robbed of a life of worth.

There is not one scintilla of evidence of Australian troops torturing prisoners of war in Vietnam.[5]

This is our great adventure, and a wonderful one it is. [6]

If we quit Vietnam, tomorrow we'll be fighting in Hawaii and next week we'll have to fight in San Francisco. [7]

There is little evidence that the Viet Cong have any significant following in South Vietnam. [8]

Oh, it's so hard to give expression to the process of the loss of ethical values that has gone on for so long. There are several edits to this post this morning. Many words are devoted to science, and invention and to practical organisation. It's expedient, but a language appears to have died in the process.

Now the killing fields extend to the world's oceans, forests and the global economy? Greed proves its exponential function.

An autopsy for national and global death needs to be carried out. Part of this process "must read Vietnam."[9]

[1] Doctor Jim Cairns was the former Deputy Prime Minister of Australia in the Whitlams Government. He was forced to resign as a result of what he claims were lies posted in the Melbourne Age (Fairfax) newspaper. (See 'Oil in Troubled Waters' by Jim Cairns. Page 92. Published by Widescope International Publishers Pty Ltd, 1976.)

[3] A reminder of Vietnam by Pauline Mitchell*
http://www.cpa.org.au/garchve03/1161cairns.html

[7] Lyndon Johnson, United States President, 1967. He was elected as a peace candidate in 1964 but then his administration organised the 'Gulf of Tonkin' incident to encourage the American people to yet another war.

Posted by Myrtle Blackwood at 9:14 AM

On rereading this article I find the questions I've asked sound so 'banal'. Perhaps because I've lived with those questions for such a long time.

Here's the latest update on Vietnam:

He also pointed out that part of the problem was that the major chemical companies the suits were filed against, Dow Chemical and Monsanto among others, were often feeders for the government and vice-versa.

“Monsanto is notorious for this; it is called the Revolving Door,” he said. “Justice Clarence Thomas, who sat in on the AO lawsuit, worked for two years as a lawyer for Monsanto.”

People are uneasy about and ashamed of the world that they have given their children to grow up in.

Not many Americans - Look ma, no draft, and kids keep enlisting (so long as the price is right). No shortage of mercenaries, either.

Banal is the notion those who serve the money god don't enjoy the social benefits and can be shamed into thinking otherwise.

"Banal is the notion those who serve the money god don't enjoy the social benefits and can be shamed into thinking otherwise."

I don't know the answer to that question. A lot of what I write is really a 'prayer'. The 23rd psalm comes to mind almost every day.

I live in a rural valley where death in the forest is all around. People need to come out from their cities and see the death and destruction. See where and how their food is produced.

I walk through the valley of the shadow of death. I fear no evil.

I don't know the answer to that question.

I live in America's heartland where agribusiness controls the flow of subsidies to farmers and of pesticides into the land, and does its best to control the total yield of GM crops sown from it and the price they bring at market. If you were to go to the local VFW hall and question the toll this arrangement takes on land and people at home and abroad you (ignorant, brainwashed commie sympathiser) would be told that those too stupid to grow their own should be grateful to industrious western geniuses for their very lives. Who needs god when one can be god?