"Employment is the bottom line of the current crisis. It is essential that governments focus on helping jobseekers in the months to come," stated Angel Gurria, Secretary General of the Organization for Economic Co-operation and Development yesterday at the launch of its Employment Outlook 2009. The OECD report anticipates that unemployment in the OECD countries could reach 57 million people and an unemployment rate of 10%. It points out that young people have been hardest hit by the jobs crisis.

Would a Minsky-inspired "job guarantee program" be an economically feasible response to that jobs crisis? Randal Wray is probably the best-known current advocate of such a program. In August, Wray posted a brief description of the idea along with some references for further reading. The Sandwichman's familiarity with the debate around the job guarantee idea comes largely from a discussion in Robert LaJeunesse's book, Work Time Regulation as Sustainable Full Employment Strategy, in which LaJeunesse sought to show why work time regulation would be superior to a jobs guarantee.

LaJeunesse's main objection to the job guarantee idea is that it expands work and consumption instead of questioning the compulsion for and ecological sustainability of perpetual, artificially-induced economic growth. Peter Victor's book, Managing without Growth, and the Sustainable Development Commission's report, Prosperity without Growth?, give persuasive evidence in support of such criticism.

While the Sandwichman agrees wholeheartedly with LaJeunesse's ecological critique, he also has microeconomic concerns about job guarantees. But first, before outlining those difficulties, more on the dimensions of the jobs crisis, and particularly the youth jobs crisis.

The official unemployment rate in August for 16-24 year olds was 18.2%. That's the seasonally adjusted "U3" number, using the narrow definition of unemployment. The BLS doesn't give "alternative measures of labor underutilization" by age categories. For the general population, the broadest measure if underemployment, U6, is 16.8% or about one and three-quarters times the official rate of 9.7%. Using the ratio of U6 to U3 to arrive at a conservative estimate of youth underemployment gives a total of 31.5% combined underemployment and unemployment.

Another way to gauge the real dimensions of the youth unemployment crisis is to look at the historical trend of the employment ratio. The current employment ratio of 46.6% is 8.5 percentage points lower than the 33 year-average. But even that average is skewed by the collapse of labor market participation that has occurred since 2001. Between January 2001 and December 2003, labor market participation of 16-24 year olds fell from 66% to 60.5%. But after that it remained virtually flat until January 2007 when it resumed its decline. In other words, although there was a modest recovery of three percentage points in the official unemployment rate the employment rate only regained about one percentage point from its 2001 recession low before heading downward again.

As the chart below shows, unemployment and under-participation leveled off at around 20% from 2003 to 2007 and then resumed their climb from near recession peak levels: 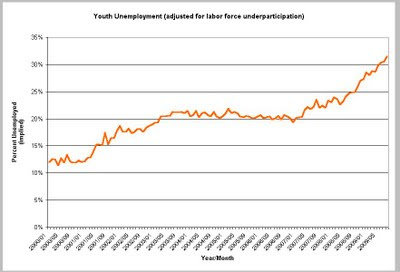 Scared yet? Returning now to Sandwichman's microeconomic objections to job guarantee schemes, there are three aspects that particularly trouble me. First is the historical precedent that explicitly "make work" jobs have always carried a stigma. This was true of the 19th century workhouse in Britain and of WPA jobs during the Great Depression.

Second, the necessity for some kind of administrative overhead -- managers, planners and staff -- must necessarily lead to the creation of a bureaucratic empire whose denizens will have a stake in the continuation and expansion of their institutional niche.

Finally, a job is not simply about the exchange of a certain amount of time and effort for a paycheck. Some kind of learning and social interaction goes on in the workplace. Not all of it is directly tied to the work. What kind of informal culture of "lifers" and "transients" is likely to emerge in buffer world of guaranteed jobs? What's to prevent the lifers (as well as the administrators) from devising schemes to divert the efforts of enrollees to their private interests?

Posted by Sandwichman at 1:14 AM

If the U3 rate is parsed by age, and the U6 is not, doesn't that suggest that the U6 for 18-24 year is included in the general rate?
That still leaves a scary situation.
--ml

The U6 for 16-24 year olds is indeed "included in the general rate". My point is that U6 is not broken out for the specific age categories so one must rely on estimates based on a presumed constant proportion between U6 and U3. The result from such a procedure is confirmed by comparing current labor force participation with historical averages. The U6 estimate for 16-24 year olds is in the neighborhood of 30% either way.

Unemployment would be a problem if we were all independently welathy.
Employment won't be the answer if the jobs all pay at the poverty level, or even 3X that level.

People have to have enough income left after bare essentials to make an economy grow. Every current economic problem in our society stems from disparate income distribution. Even the health care finance issue isn't just the uninsured. The employed can hardly keep up with the cost of health care, whether direct service or insurance cost. Resolve the skew in the wealth and income distribution and save the world(or, at least the US economy.)

Sorry,
Unemployment would NOT be a problem if we were all independently wealthy.

"First is the historical precedent that explicitly "make work" jobs have always carried a stigma. This was true of the 19th century workhouse in Britain and of WPA jobs during the Great Depression."


"Second, the necessity for some kind of administrative overhead -- managers, planners and staff -- must necessarily lead to the creation of a bureaucratic empire whose denizens will have a stake in the continuation and expansion of their institutional niche."

There are those who say thius has aready happened, but the administrative overhead is going to prop up profits not wages...

"Finally, a job is not simply about the exchange of a certain amount of time and effort for a paycheck. Some kind of learning and social interaction goes on in the workplace. Not all of it is directly tied to the work. What kind of informal culture of "lifers" and "transients" is likely to emerge in buffer world of guaranteed jobs? What's to prevent the lifers (as well as the administrators) from devising schemes to divert the efforts of enrollees to their private interests?"

If you think this is bogus, I have a house in Alaska I'd like you to remodel...

My only objection to this piece is why LaJeunesse's book costs $115. Could it be, perhaps, to keep the information safely away from us proles?

So economists can then complain about how illiterate we are in those things economic.

Perhaps, the best objection to the idea of a government "job guarantee program" is that it ultimately rests on the notion that government will always be capable of supplying sufficient stimulus to maintain anything approaching full employment - that, somehow, government differs from private borrowers such that it can borrow unlimited amounts of money.

If, on the other hand, Chapman is correct that productivity improvements will bring employment to center stage time and again, ultimately, Minsky rests on the assumption of infinite government resources to fulfill this function - ultimately replacing the whole of private employment.

Chapman's view is borne out by Grossman's explanation of the Marxian model, which predicted that, as of the Great Depression, capital had reached the limits of profitable expansion.

We shall see how long the Federal government will be able to substitute for the rest of the economy as the "everything of last resort".

I am not impressed by the blog of Wray’s to which to refer at the start of the above article. Essentially he is just saying “wouldn’t it be nice if everyone had a reasonably well paid job, including health care and numerous other goodies and benefits”. This is pie in the sky. It’s reminiscent of Humphrey-Hawkins.

He completely fails to identify any of the problems than need addressing to get JG to work.
Needless to say I do address and solve these problems on my blog: http://employerlastresort.blogspot.com/2009/03/employer-of-last-resort.html

Your comments are welcome.

Re your references to workhouses and WPA, it’s good to see someone reading the history before opening their mouth. I don’t think the “stigma” point is a serious problem. Granted there was a HUGE stigma attached to going into the workhouse. But no significant stigma was attached to working on WPA was it? I’ve actually worked on JG type schemes in the UK in the 1970s and know other people who have. I never came across any stigma.

Re your point in your last para about “lifers”, granted this would be a problem with JG, but no more so than with any other bureaucracy, seems to me.

I'll have a closer look at the argument on your blog when I have a chance.

I can't say too much about stigma of WPA other than one study I read by Jennifer Long about perceptions of job creation programs in Knoxville, Tennessee in the 1930s and 1940s: Tennessee Valley Authority, WPA & CWA and Oak Ridge Nuclear Program.

I don't see any reason that the problem with lifers would be any worse than other govt. programs other than if the scale of the JG program was quite large. Actually, the main objection that I would have to JG would be scalability. In a relatively small program the problems would be manageable.

Sandwichman: I agree with your "scalability" concerns. This is one of the main weaknesses, seems to me, in JG as advocated by its main proponents (Warren Mosler, Wray, etc). They assume that the organisation responsible for implementing JG (local government) will be able to deal with and find useful work for an army of (for the most part) not desperately skilled people from the dole queue.

Indeed, during a serious recession (like the current one) this army will outnumber the number of people normally employed by local government. This is just a recipe for chaos. This is one of the main reasons why, in my proposed version of JG, those concerned are distributed throughout the economy.

Hi Sandwichman, I just published a paper on Job Guarantee or "Government as Employer of Last Resort". It's here:

Thanks, Ralph. Yes, I came across your article last week and was going to leave a comment on your blog. Do you happen to be familiar with a study by Barbara Sianesi, "Differential Effects of Swedish Active Labour Market Programmes for Unemployed Adults during the 1990s"?

Her analysis purports to show that WPA-type employment tends to LOWER the long-term employment prospects of participants, compared to simply continuing to search for standard employment. I don't know how well the study controlled for the different personal characteristics of the two groups, considering that it was an econometric analysis of program data. I tend to be wary of findings based on massaging old routinely-collected statistics.

Nevertheless, the results do raise uncertainties about the long-term benefits of a temporary, government guaranteed job. Maybe having taken such a job stigmatizes a worker in the eyes of prospective employers. Or maybe having to look more intensively for a job teaches valuable skills that come in handy the next time around.