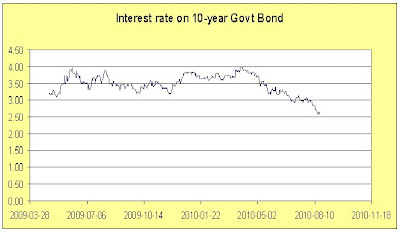 Our graph shows the interest rate on 10-year Treasuries from April 1, 2009 to now. Notice a bit of interest rate volatility with rates at times climbing to around 4 percent but the current interest rate being near 2.6 percent.

Why do we care that interest rates rose by 34 basis points in a week over a year ago in light of the fact that the interest rate on 10-year Treasury bills is now done around 2.6 percent? Does Lanman and Kennedy really think the slightest tendency to see decent real GDP growth is going to cause rising inflation and nominal interest rates?
Posted by ProGrowthLiberal at 3:23 PM

What kind of inflation are you talking about ?
Inflation is ALSO an indication of what money is worth in our own eyes. And while we have got rid of the ideological and religious safeguards against the idolatry of money (making it the measure of ALL things) we have, at the same time, been consummately building it up to be worth... NOTHING.
In the 1600's, in England you could buy something for £20 that it would cost you £10,000 to buy today.(And we could debate WHETHER you could still buy it, because we're not making things with the same care and quality as we once were...)
IS THAT INFLATION or what ?
THAT kind of inflation is tied in to our unconscious perception of the value of what we're producing as a society (which is about as cheap and tawdry as the filthy dematerialized lucre that is washing over the planet in industrialized fashion too).
Your chart does NOT measure THAT inflation.
But it's there, it's there. And we know it too.