Search Theory Gets a “Nobel”

The “Nobel” economics prize has just been awarded to the trio of Diamond-Mortensen-Pissarides (DMP) for their work on search theory, the most influential theoretical trend in labor economics. (The quotes around “Nobel” signify the non-Nobelian history of this prize.)

Others are far more qualified than I am to discuss the larger significance of their work. I’ve been interested in one aspect: its implications for the concept of full employment. In the days before search theory, one standard story went like this:

The labor market is like other markets in the sense that market-clearing occurs when there is neither excess supply nor excess demand. The difference is that there is great heterogeneity of jobs and workers, and information is often murky. The result is that, at any moment, there are many jobs looking for appropriate workers and many workers looking for appropriate jobs. Taken together, these reflect structural and frictional unemployment.

It can all be viewed in terms of a Beveridge Curve, with the number of unfilled jobs (vacancies) on the vertical axis and the number of unemployed workers on the horizontal axis: 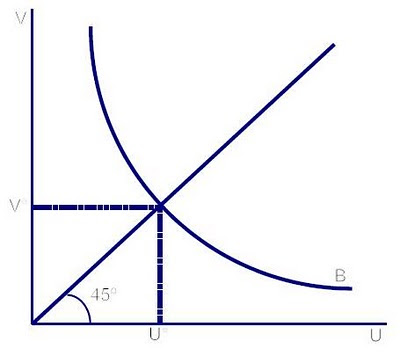 The 45º line represents equal numbers of vacancies and unemployed workers, therefore no excess demand or supply in the aggregate. Its intersection with the B-Curve determines the level of unemployment that should be viewed as “full employment” for any particular economy. This full employment level can be lowered by making the labor market more efficient, through job training programs (to reduce structural unemployment) and information and referral systems (to reduce frictional unemployment).

A very different story, about inflation and the “natural rate” of unemployment, largely displaced this one, but I won’t go there now.

So back to the B-Curve. Along came D-M-P, and especially M-P, and we got a new definition of full employment. The 45º line, we were told, is arbitrary. Why should equal levels of vacancies and unemployed workers signify labor market equilibrium? On the contrary, we should pay more attention to the microstructure of labor markets. Two factors in particular intrude, the relative flows of workers and jobs into the market and the relative ability of workers and employers to locate a suitable match. Equilibrium occurs, it was asserted, at the ratio of vacancies to unemployed workers which, given these factors, will be stationary over time, ceteris paribus. 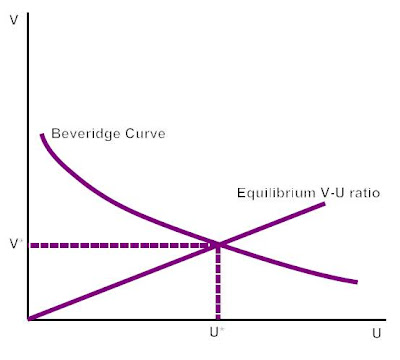 Unlike the other, this one isn’t symmetrical. Its shape suggests that the economy is “biased” toward higher unemployment; this can be because the “steady-state” flow of workers exceeds the corresponding flow of job openings, or because workers are less efficient at finding jobs than employers are at finding workers. A flatter line, at an angle significantly less than 45º, represents a ratio of vacancies to unemployed workers less than one-to-one; this ratio will remain constant given the underlying determinants of the B-Curve. Its intersection with the curve gives us the true level of full employment.

I never got it. (a) Why should a steady-state criterion represent either equilibrium or a normative goal for labor market performance? This would make sense if we lived in a steady-state world, but we don’t. The analysis is simply a snapshot, and what would be impossible if we had to sustain it for all eternity can be entirely possible if it occurs for only a few quarters. In particular, I would want to see worker and employer behavioral response functions that could be estimated with real-world data before I would draw any conclusions about what point on the B-Curve should be viewed as an equilibrium. (This goes for the “naive” 45º line story too.) Here, for instance, is where efficiency wage theory would come in. (b) The flows highlighted by search theory are themselves sensitive to cyclical influences. Workers are responding to today’s dismal labor market, for instance, by withdrawing from search and, in some cases, by choosing non-work alternatives, like more education (good) or giving up on personal ambition (bad). Over time, there is hysteresis. Job flows are influenced not only by immediate demand considerations, but also by delayed or discarded investment plans, another form of hysteresis. This may not affect the positive side of the story (equilibrium), but it should definitely change the normative spin we give to it.

As for myself, I remain agnostic. I accept the critique of the 45º line, and I don’t assume that the goal of macropolicy should be to equalize labor and job offers. I don’t think search theory has given us an adequate replacement, either. Maybe the best we can do at the moment is to benchmark our current performance against recent time periods when labor markets were in more acceptable shape—for instance, the late 1990s. By any reasonable standard, a greater than five-to-one ratio of unemployed workers to job vacancies is simply abysmal and refutes the claim that it is the position of the B-Curve (structural unemployment) that ails us rather than our position out at the far southeastern tail (deficient demand).
Posted by Peter Dorman at 11:08 AM

Nobody was forecasting this one, with the exception of a few people mentioning Diamond. The prediction markets and betting pools were all way off, yet again.

So how are the economics job seekers taking the announcement this year? If I remember right, this is the time of the year when economist grad students do citation counts as they harvest sour grapes and complain that the field is too politically correct.

I keep looking at these graphs and wondering what they have to do with prediction or advisable policy. The picture of unemployment is drawn very nicely. But what has this to do with policy to alter the picture? There is slack demand because all of the purchasing power is in the hands of a few people at the top. These folks can't possibly spend all the money they receive on a continuing basis and if they did, they would be spending it on art and opulence. The people who receive these funds will do likewise and the money never enters the real economy. Investment is currently the repurchase of shares of stock or the merging of two organizations. And again, the money is isolated from the real economy and ends up as savings.

It is the constant delineation of the economy into producers and consumers that makes neoclassical and marginal economics an unreal endeavor. All persons consume lest they die. There is no separate class called consumers. The clear distinction of class is between owners and producers. And until the economics profession pays a lot more attention to that reality economics will remain UNREAL.

At present the reward to ownership is far to great and the reward to production is far too little. Wages must rise at the expense of RENT. How does that effect the graphs and the curves???? Or what policies are needed to move the magical line ABOVE 45 degrees?

this is why i don't like neo/classical economic reasoning (seen in typical textbooks). the signal/noise ratio seems really low. (of course this makes possibly the 'efficiency wages' of textbook writers way up there since they can hoodwink people into paying for this j-nk, if i'm right.)

it seems the classical picture would have B=0. (full employment). so, why does such a curve exist? what is B(x,y)? obviously market imperfections. including say 'behavioral economics'. R Lucas might say its sunspots or actually an illusion---there is no B().

(who is beverdige anyway? these old presentations seem like discussing ethers or survivl of the fittest. course, it can be done that way consistantly (as R Lucas has shown)).
if one looks at the whole universe, the second law of thermo doesnt hold and the market is efficient, and following 'decoherence' (everett-wheeler) any ('money') illusion of inneficiency is just that.
one may have to explain why observers who coarse graining reality (making up consistant her/stories exist, but that can be left for the excercizes section).