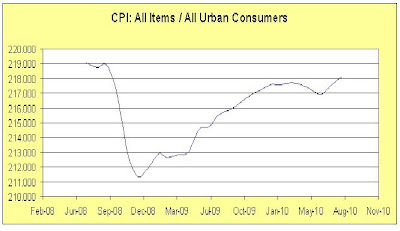 Matt Sedensky seems to think the government has decided to reduce the real value of Social Security checks given his title “Senior citizens brace for Social Security freeze”:

Seniors prepared to cut back on everything from food to charitable donations to whiskey as word spread Monday that they will have to wait until at least 2012 to see their Social Security checks increase. The government is expected to announce this week that more than 58 million Social Security recipients will go through a second straight year without an increase in monthly benefits. This year was the first without an increase since automatic adjustments for inflation started in 1975."I think it's disgusting," said Paul McNeil, 69, a retired state worker from Warwick, R.I., who said his food and utility costs have gone up, but his income has not. He lamented decisions by lawmakers that he said do not favor seniors.

There has been no recent decision by lawmakers to freeze nominal Social Security benefits. As our graph shows, the consumer price index for August 2010 is actually lower than it was in July 2008. So if CPI properly measures the cost of living – then seniors have received a slight increase in real income. Some prices may have increased while others have decreased. And perhaps food and utility for some seniors carry a higher weight in their own budgets than the typical consumer. But if that is the argument that Mr. Sedensky wants to make – then he should make that case well before the end of his article:

Advocates for seniors argue the Consumer Price Index doesn't adequately weigh the costs that most affect older adults, particularly medical care and housing. "The existing COLA formula does not account for the economic reality of the true costs that most seniors faced," said Fernando Torres-Gil, director of UCLA's Center for Policy Research on Aging and the first person appointed to the governmental post of assistant secretary for aging, during the Clinton administration.

Even here – I have a problem with what Mr. Sedensky writes. According to the Bureau of Labor Statistics, energy prices have dropped dramatically over this period. It is true that the food price index has increased slightly. Over the same period, the housing price index has declined slightly. The medical price index, however, has increased by 6.8 percent. OK, seniors who budgets are heavily weighted towards the cost of medicine may have to make cutbacks.

Update: Thanks to Econospeak reader JWMason who asks us to check the CPI-E, which is discussed here:

The Bureau of Labor Statistics (BLS) also calculates an experimental price index for Americans 62 years of age or older (often called the CPI-E). This article reviews price changes seen in the experimental CPI-E from December 1997 through December 2009 and reiterates the methods, sources of data, and limitations of the experimental index described in earlier articles. Over the 12-year period from December 1997 through December 2009, the experimental CPI-E rose 36.1 percent. This compares to increases of 33.9 and 33.8 percent for the CPI-U and CPI-W, respectively … The relative importance data for the CPI-E and the CPI-U and CPI-W populations show that older Americans devote a substantially larger share of their total budgets to medical care (see Table 1). In addition, for each population group, medical care prices rose more rapidly than the overall (all items) index during each of the eight years studied. For this reason, the medical care component accounts for a significant portion of the difference between the higher rate of increase measured for the CPI-E relative to the two official population groups during the 1998-2009 period … The CPI-E, reweighted to incorporate the spending patterns of older consumers, behaved more like the CPI-U than the CPI-W. This was expected, because the CPI-U includes the expenditures of all urban consumers, including those 62 years of age and over. The CPI-W, however, is limited to the spending patterns of wage-earner and clerical families and, therefore, specifically excludes the experience of families whose primary source of income is from retirement pensions. Finally, the medical care component of the CPI has a substantially larger relative weight in the experimental population compared to the CPI-U or CPI-W. As a result, the medical care component tends to have a larger effect on the elderly population than it does on the other two indexes. Other differences also play an important role, however, such as the greater weight of homeownership in the CPI-E.

So why not index on CPI-E rather than CPI-W?
Posted by ProGrowthLiberal at 10:53 AM

I don't read EconoSpeak in the expectation of seeing a defense of lower SS benefits. At a moment when the political process makes almost any kind of stimulus impossible, to argue against the one form of of increased public spending that actually has some political traction is neither pro-growth nor liberal.

The medical price index, however, has increased by 6.8 percent. OK, seniors who budgets are heavily weighted towards the cost of medicine may have to make cutbacks.

Seniors whose budgets are heavily weighted toward health care are, basically, seniors.

Because guess what, PGL? We don't actually have to speculate about this stuff, we can use data. And the BLS' CPI-E, which measures the cost of living specifically for elderly households, consistently runs about a quarter of a point ahead of the CPI-U, which is used for calculating benefits. And the biggest reason for that is that medical care makes up close to twice the share of the expenditure of the elderly -- 10.8% vs 6.4% in the CPI-U.

It would have taken you about 10 minutes to find this. But instead you decided to join the austerian brigade. Not what I expect from this site at all.

JW - my call was NOT for policy makers to reduce Social Security benefits. In fact you make a good case why policy makers might consider an increase (oh wait - Senator McConnell says no to common sense). My plea is for more informed discussions of these issues. And you take my limited dive into the data another step further. Thanks for spending the extra 10 minutes to heighten the discussion another step further. Now if our reporters could do the same - I'd be quite happy!

You know... I got kicked off of a blog a while ago for suggesting that the world of the second world war is all around us now. The camp... is no longer a circumscribed one in long ago Nazi Germany, it is.. ALL AROUND US.
We are waging war on... the poor, the elderly, the sick, everyone who could possibly be qualified as being vulnerable or "weak" to use the term that FASCIST IDEOLOGY uses (yep, we're talking about fascism here, it's ALL AROUND US).
The underlying premise of this WAR is that the sick, the weak, the poor, the elderly ARE UNDESIRABLE ELEMENTS of our society that we must get rid of in order to remain strong, and REMAIN COMPETITIVE or.. HAVE ENOUGH FILTHY LUCRE TO SURVIVE.
And these fascist ideas are still thriving, nourished by social Darwinist theories that still garner lots of belief in the general population, and have produced a whole class of.. unwittingly FASCIST managers.
The problem is... that it is entirely possible to be FASCIST without having the word appear anywhere in our vocabulary.
The word is not.. MAGIC...
And I refuse to say that "THEY", the managers, or "the rich" are the ONLY ONES who are fascist.
OUR SOCIAL BODY is operating under fascist premises. If it were simply a question of "they", this problem would be a lot easier to "fix".

The closing of the Medicare Part D donut hole via the ACA should have the effect of closing much of the gap between CPI-U and CPI-E. Or at least someone should run the numbers before we chase our tails arguing about indexes. Even if I believed CPI-E could possibly capture the true COL of seniors. My state and even my city offer a wide range of direct and discounted services to people over 55, something certainly not uniformly done across the country. But just about every place has something, even if it is as simple as the Early Bird Special at the local cafe. Trying to quantify for that and things like the variable opportunity costs for bargain shopping between current workers and retirees being pretty difficult, or so I would think.

Social Security COLA is based on the CPI-W and not the broader CPI-U as is stated in some of the comments. The experimental CPI-E comes much closer to reflecting what we seniors experience for cost of living. However, don't expect it to be used anytime soon. Given all the "sky is falling" rhetoric coming from Washington our "representatives" are looking for ways to reduce future COLAs even more than in the past.

The closing of the Part D donut hole will be a financial windfall for Medicare beneficiaries.
Less money out of pocket means higher subsidized premiums, at 75%.
And, that 75% comes right out of the budget (taxes and deficit).
Of course, the 25% share of the premiums paid by beneficiaries will rise also.

Just a comment on a technical matter that is often overlooked: the CPI is an expenditure index and not an income index.

This is the difference: excluded from the CPI is a large chunk of the cost of housing along with income taxes, non-mortgage interest costs, and possibly other stuff I can't remember. The CPI might increase by 2% in a year, but these other components (outside the CPI) might increase by 4% a year. (Or, of course, maybe there are only 1%.)

So if one deflates nominal income by the CPI (in the example above, 2%) then one might overestimate the growth of real income because the CPI does not take into account the 4% increase (in this example) in costs that are outside the CPI market basket...but these costs are still paid for by consumers and directly affect their real income.

Determining a "fair" rate of increase of SS benefits (that is, income) requires, then, a consideration of factors beyond the CPI. The CPI, which ever version is used, is certainly relevant to the real value of SS benefits but it is not the only relevant bit of price information.

Obtaining social security disability is hard enough to begin with, will this freeze make it even more difficult in the future?