Argentina and Brazil, Income and Wealth


Paul Krugman compares the economic record of Argentina and Brazil, giving us an Excel chart of real GDP growth: 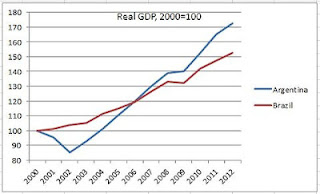 Yes, it’s true: wicked Argentina, which has violated every rule in the book, is growing more robustly than virtuous Brazil.  From the standpoint of employment and income generation, this is the main event.  Says Paul:


Just to be clear, I think Brazil is going pretty well, and has had good leadership. But why exactly is Brazil an impressive “BRIC” while Argentina is always disparaged?

But here is another case of focusing on income versus wealth.  From an income point of view, Argentina looks good, but what about wealth?  Argentina defaulted on its sovereign debt, Brazil didn't.  For a Keynesian, this is important only in terms of its impact on future growth, and clearly Argentina’s default was a constructive policy move.  If your perspective is the preservation of wealth, however, it’s a huge, huge deal.

And the confiscation of wealth was not a one-time event.  Here, courtesy of the World Bank’s Development Indicator database, is the record over the same years of “the real interest rate”.  (This is a measure of the private sector lending rate minus the concurrent rate of inflation—not ideal, but a reasonable indication of the real return on capital.)


In Brazil wealth-holders can count on rapid accumulation of more wealth.  In Argentina the situation for wealth is dire.  In fact, if Argentina’s inflation is underreported as some claim, the real return is even more negative than what we see.  In essence, claims on output are being reallocated from current wealth-holders to net borrowers and the state.  It is no surprise that people with money are trying to take it out of the country, which is why the Argentine government deploys a canine corps to sniff out suitcases of cash at the Buenos Aires airport.  Are all the folks trying to give their money a Swiss vacation rich?  The rich are certainly the most influential of the lot, but many are likely to be middle class as well.  When they worry about what the country is doing to their personal finances they are not hallucinating.

Just to be clear, I think that producing more of the goods that sustain a high quality of life and providing productive, decently paying work to those who need it should be light years ahead of wealth preservation in priority.  Nevertheless, from a political point of view, the balance of priority between income and wealth is rather different.  Opposition to the Kirchners is based primarily on their confiscation of wealth, and it will not disappear because Argentina’s GDP is growing faster than Brazil’s.

Footnote: Even from a Keynesian point of view there is some cause for concern.  Inflation in Argentina has drifted upward to the point where a takeoff into hyperinflation is no longer a negligible risk.  At some point soon the policy will have to turn toward disinflation, and unless they can pull off an incomes policy miracle, it will take the form of reduced growth.  Even so, of course, the decade-long run of rapid growth is almost certainly worth it.

Footnote #2.  For another example, consider Ireland and Iceland.  If your main concern is stemming the slump and restoring GDP growth, Iceland beats Ireland hands down.  But Iceland defaulted on the obligations of its banking system, while Ireland has gone profoundly into hock in order to avoid defaulting on theirs.  From a wealth point of view, it’s like comparing saints and criminals.

On the Ireland and Iceland tip: Isn't running up government debts to bail out the banking system also a destruction of net wealth?

The issue in the two countries is that wealth was destroyed by an exogenous event and the countries are just applying two different strategies in recognizing the loses.

It's not clear what point you are making comparing Brazil and Argentina. Are you suggesting that countries should not pursue policies that cause real interest rates to run negative? The US is also pursuing such a policy and maintaining a positive real interest rate would have both a wealth and income destruction effect.

Andrew, it is certainly true that the collapse of the housing bubble in Ireland and the Ponzi financial mania in Iceland both resulted in huge asset losses. In the case of Ireland, however, the state ran up massive deficits and squeezed the real economy in order to make good the claims of all creditors and depositors: they drained income to restore wealth. Iceland was fortunate to have a political upheaval early on whose result was to sustain incomes at the expense of wealth.

Perhaps I have to insert a few slogans now and then to make my own position clear. I am absolutely on the side of supporting the production of new goods and services -- generating income and employment. If safeguarding the claims of wealth-holders gets in the way, choose income over wealth. By all means endorse low and even negative interest rates if they are needed to get the job done. I do think there are circumstances in which wealth claims *do* matter a lot (e.g. the former Soviet Union in 1990), and even when I think they should be subordinate I don't think they should be disregarded entirely. Wealth is fundamental to long term planning. But incomes normally come first. I hope there's no confusion now.

nice posting.. thanks for sharing.

Prices of grain are likely to go up, especially because it is being forecasted that Argentina will have a dry year in 2013. Besides, the biodiesel industry is growing faster that we all thought, and will take over the market. Last year I was in the country, rented Buenos Aires real estate and people were all talking about this problem, plus, we can´t forget about the exhaustion of the crops.
it is serious!