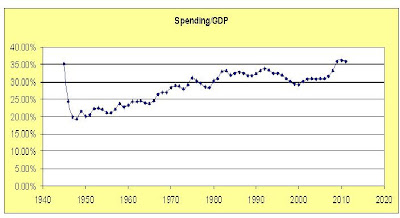 he insisted (if I understood him correctly) that currency debasement and price controls destroyed the Roman Empire. I responded that I am not a defender of the economic policies of the Emperor Diocletian.

I studied ancient history as well as economics in college but I don’t profess to know much about the policies of Emperor Diocletian either. Paul’s performance was strange in so many ways. For example, he pretended to be the defender of free markets as accused Dr. Krugman of not being in favor of market based economies. Yet, Ron Paul was the one who does not want the market to determine exchange rates, which is just one of many ways we know he is not very familiar with the writings of Milton Friedman. I guess there was one subtle point of concession between the two debaters. Both seemed to think the economy that followed World War II was a good one. But Ron Paul’s praise of this period struck me as odd as he claimed that the reason that the government debt to GDP ratio fell was an alleged decline in government spending. Our graph does show that government spending as a share of GDP was still high in 1945 so this ratio had to decline as we reduced defense spending as World War II ended. But our graph shows that government spending rose as a share of GDP for much of the latter half of last century. So maybe Ron Paul knows more about the Roman Empire than I do but his knowledge of recent history is suspect.
Posted by ProGrowthLiberal at 8:10 AM

Saying having a commodity-backed currency is equivalent to exchange-rate fixing is as tautological as saying that it is equivalent to price-fixing for that commodity. If two currencies A and B are redeemable for the same commodity, A for x amount of the commodity and B for y amount, then A = x, B = y, and A/B = x/y. Saying the exchange rate is artificially "fixed" is as foolish as saying the exchange rate between grams and ounces is artificially fixed. Under a commodity standard, currencies are units of measure, unlike our floating standards today in which currencies are units of nothing but themselves.

Of course, if you have different commodities behind each currency then the market will reflect the prices of those commodities as exchange rates between the currencies that are units of measure of those commodities. That was one problem with the very early American currency. Thomas Jefferson fixed the value of the dollar in both units of gold and units of silver. Since the supplies of silver and gold are independent, this was doomed to cause inconsistency in demand for gold dollars and silver dollars. That was not a market error, but a currency-issuer error. And since that currency issuer was bound by statute to redeem the commodities at the statutory rates, there was no adjusting without changing the statute.

Krugman I think was right that there were, and are, competing pseudo-currencies, but he was wrong to say that merely their existence was the cause of the financial collapse. I think a true factor of the collapse was the Fed's implicit guarantee that the banks would be able to balance their books, even if their bets went bad. In essence, the Fed really did fix the exchange rates of the risky pseudo-currencies.

Nice article, thanks for the information.

I ran into someone in the real world who shared some of Ron Paul's crazy, revisionist history (it was the cool-down, post-war that saved the economy from the Depression, not spending 42% of GDP on the military build-up). The scary thing was this person is a public school teacher. He then went on to say that if government spending could help people in a recession, then the war in Iraq should've saved our economy from recession.