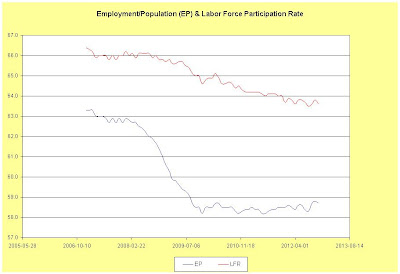 A lot of pundits this weekend were calling the latest news from the BLS as good news. Yes – the payroll survey showed a modest increase in employment but the household survey suggested a decline. But then the pundits also note the decline in the unemployment rate to 7.7%, which is lower than the 7.8% rate observed for January 2009. But is that really good news? No because the employment to population ratio fell last month with the decline in the unemployment rate coming from a larger drop in the labor force participation rate. It is true that the employment to population ratio has had a bumpy ride increasing from its low of 58.2% during the middle of 2011. While the unemployment rate has showed a more impressive decline, a fair amount of that decline over the past 18 months has been from a decline in the labor force participation rate. Furthermore, our graph shows just how far both series have declined on net since President Obama took office. To be fair, Obama inherited an economy in free fall and the economy has been recovering slowly since the Great Recession ended. But let’s stop cheerleading how great the labor market is and it is still awful. Which is all the more reason to pursue fiscal stimulus not rather than allowing this “fiscal cliff” to occur.
Posted by ProGrowthLiberal at 6:52 AM

GENEVA (ILO News) – The world faces the “urgent challenge” of creating 600 million productive jobs over the next decade in order to generate sustainable growth and maintain social cohesion, according to the annual report on global employment by the International Labour Organization (ILO).

“After three years of continuous crisis conditions in global labour markets and against the prospect of a further deterioration of economic activity, there is a backlog of global unemployment of 200 million,” says the ILO in its annual report titled “Global Employment Trends 2012: Preventing a deeper jobs crisis”. Moreover, the report says more than 400 million new jobs will be needed over the next decade to absorb the estimated 40 million growth of the labour force each year.

The Global Employment Trends Report also said the world faces the additional challenge of creating decent jobs for the estimated 900 million workers living with their families below the US$ 2 a day poverty line, mostly in developing countries.

“Despite strenuous government efforts, the jobs crisis continues unabated, with one in three workers worldwide – or an estimated 1.1 billion people – either unemployed or living in poverty”
http://www.ilo.org/global/about-the-ilo/media-centre/press-releases/WCMS_171700/lang--en/index.htm

GENEVA (ILO News) –
Wage growth remains far below pre-crisis levels globally and has fallen into the red in developed countries, despite continuing increases in emerging economies, according to an ILO report.
Global monthly wages* grew by 1.2 per cent in 2011, down from 3 per cent in 2007 and 2.1 per cent in 2010, the Global Wage Report 2012/13 says. These numbers are even lower if China is excluded from the calculations.

“This report clearly shows that in many countries, the crisis has had a strong impact on wages – and by extension, workers,” said ILO Director-General Guy Ryder. “But the impact was not uniform.”
http://www.ilo.org/global/about-the-ilo/newsroom/news/WCMS_193553/lang--en/index.htm

Unemployment is like a headache or a high temperature - distressing and stressful but not holding in itself any description of its cause.
Competitive Market Research