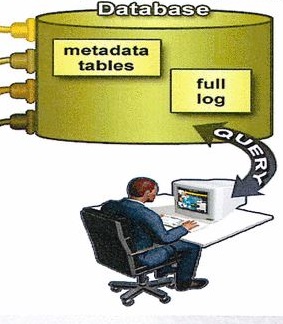 In January 2003, Gene Healy of the Cato Institute wrote:


John Poindexter, head of the Pentagon’s Office of Information Awareness, is developing a vast surveillance database to track terror suspects. The Total Information Awareness (TIA) system will, according to Poindexter, “break down the stovepipes” that separate commercial and government databases, allowing OIA access to citizens’ credit card purchases, travel itineraries, telephone calling records, email, medical histories and financial information. It would give government the power to generate a comprehensive data profile on any U.S. citizen.

TIA was subsequently supposedly "defunded" by Congress while funding for its programs was continued under different names. See The Total Information Awareness Project Lives On, MIT Technology Review, April 26, 2006:


Washington’s lawmakers ostensibly killed the TIA project in Section 8131 of the Department of Defense Appropriations Act for fiscal 2004. But legislators wrote a classified annex to that document which preserved funding for TIA’s component technologies, if they were transferred to other government agencies, say sources who have seen the document, according to reports first published in The National Journal. Congress did stipulate that those technologies should only be used for military or foreign intelligence purposes against non-U.S. citizens. Still, while those component projects’ names were changed, their funding remained intact, sometimes under the same contracts.

Does the name "John Poindexter" ring a bell? Iran-Contra? Lying to Congress? See below (see also "Robert Gates" under non-prosecutions, the CIA):


Summary of Prosecutions (from "Understanding the Iran-Contra Affairs")

Summary of Non-Prosecutions
The Independent Counsel investigated a number of government officials that he decided not to prosecute for a variety of reasons. Here you can find information about those investigations and the reasons that Walsh chose not to bring charges.