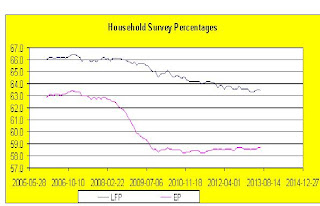 The Employment Report noted that the unemployment rate fell last month to 7.4% and here is Brad’s reaction:

An Unemployment Rate Edging Down Because Participation Fell Is Not Good News ... Employment-to-population ratio unchanged is a labor market treading water. 162K payroll jobs is not an establishment employment gain that makes me think it is time to "taper".

Although he is right the usually excellent kharris left this comment:

I guess we should note that population tends to rise over time. But here’s the funny thing – while the June to July change is as Brad notes, the May to July change shows that the net change in the labor force participation rate (LFP) was zero while the employment to population ratio (EP) edged up. Rather than focus on the month to month noise, take a look at our chart over period since 2006, which both the period when unemployment skyrocketed and this recent decline. Most of the decline in the unemployment rate was from a falling participation rate with the employment to population ratio up from 58.2% at its lowest to the current 58.7%. So I score this one with Brad.
Posted by ProGrowthLiberal at 4:30 PM

We really should beat unemployment. Luckily, we have a bill protection insurance option to keep us secured especially here in Australia.

Your savings or money is very important to each and every individuals because they work hard for it. Investing for insurance income protection is one that makes you feel comfortable that even if in unexpected situation your money is secured.