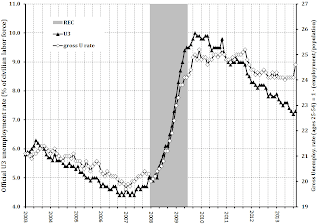 On this last Friday (11/8), the Bureau of Labor Statistics of the U.S. Department of Labor released its newest number on conditions in labor markets. The number that got the most attention was the growth of employment. To quote their website, “Total nonfarm payroll employment rose by 204,000 in October, and the unemployment rate [U3] was little changed at 7.3 percent...” (The full report is at http://www.bls.gov/news.release/empsit.nr0.htm.)

The news of 204 thousand extra jobs should be treated carefully. Nobody should be excited (assuming, of course, that anything in economics can be exciting). What really demands our attention is the changes that occur from year to year. After all, month-to-month numbers can involve all sorts of temporary changes that indicate nothing about the trend. So looking at the increase in employment from October 2012 to October 2013, the number is 194 thousand per month, which is slightly less exciting than 204 thousand.

More importantly, even though by this measure job creation has been rising since early 2013, the October-to-October increase in hiring was significantly slower than what we saw in early 2012. Job creation may catch up with what happened then, but when the demand for products is growing slowly that also means bad conditions for job-seekers. (According to the Bureau of Economic Analysis of the U.S. Department of Commerce, real GDP grew only 2.8% in the third quarter. It’s likely to turn out to be worse than that, once we see more accurate estimates. GDP must increase more than about 3% for an entire year to truly lower unemployment rate.)

Even more importantly, the unemployment situation has not been improving much at all. U.S. labor markets cannot be said to have recovered from the "Great Recession" of 2008-2009. As the graph shows, it's true that the official (U3) unemployment rate has edged downward since early 201. At its height, it was at 10% and now it's down to 7.3%. This is still high by most economists' standards.

As anyone who's studied macroeconomic should know, this number misses the fact that a lot of unemployment people can -- and do -- stop being counted as unemployed by the BLS if they stop actively looking for jobs. And that kind of discouragement can hit in a big way if the job market is miserable month after month. The most likely to be discouraged from further job-seeking are the long-term unemployed (which the BLS defines as those who have jobless for a half year or more) was about 4.1 million in October, about 36% of the unemployed. Again, if these folks stop looking for jobs, they're no longer counted as unemployed.

To correct for this effect, I calculated the "gross unemployment rate." It's simply a reflection of the employment/population ratio that labor economists often use to help figure out what’s going one but it's designed to be easy to compare to the official U3 rate. (My ratio is simply 100% minus that e-pop ratio). Note that the one I calculated this time is only for people between the ages of 25 and 54, so it doesn't reflect retirements or college graduation very much if at all.)

Notice also that if we look at the gross unemployment rate, the numbers jumped in October. It's only a one month leap, but it reflects the government's temporary shut-down. The fact that it rose much more than the official rate reflects the way that a lot of people have stopped looking for jobs. It’s quite possible that this event will continue to keep the growth of GDP slow. Of course, it could just be a one-time event that will be reversed.  -- Jim Devine
Posted by Econoclast at 5:03 PM

We have all types of jobs from sales jobs to admin jobs to retail jobs. We provide a service where the jobs come to you. Simply register with IT Jobs London News Jobs, tell us what types of jobs that you're looking for and our Jobs by e-mail service will send you relevant jobs in the london area. Search for a job and find your next job here.